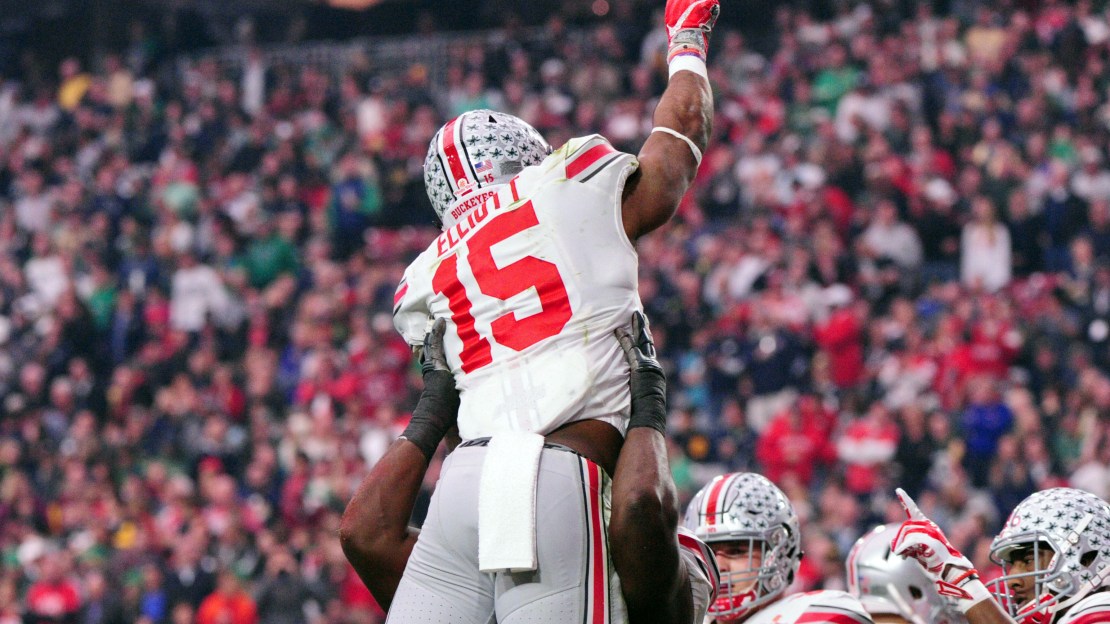 Would Ohio State have a letdown, they wondered?

The reigning nation champ showed no signs of a hangover after missing out on the second annual College Football Playoff, looking impressive en route to a 44-28 victory over Notre Dame on Friday in the 2016 Fiesta Bowl.

BEST OF THE FIESTA BOWL

Best play: This one came from the losing team, but the DeShone Kizer-to-Chris Brown touchdown pass in the third quarter was a thing of beauty. The pass was on the money, and the catch was nice, too.

Notre Dame gets within a TD of Ohio State after an impressive grab by Chris Brown. https://t.co/SGUAgXCh7o

Best player: Ezekiel Elliott. Playing in his final college game, the star junior ran for 149 yards and four touchdowns, which tied a career-high, set in last season's championship game vs. Oregon. He also added 30 yards receiving on a pretty play down the sideline.

Best moment: To celebrate his fourth touchdown run of the day, Ezekiel Elliott flashed Joey Bosa's signature shrug. The two-time Big Ten Defensive Lineman of the Year was ejected for targeting in the first quarter.

Offense: A. Ezekiel Elliott was at his usual playoff best, running for 149 yards and four touchdowns, which tied his career-high, and J.T. Barrett showed his dual-threat abilities, throwing for 211 yards and a score and running for 98 yards. The Buckeyes finished with 498 total yards.

Defense: B+. There was no Adolphus Washington and Joey Bosa was ejected midway through the first quarter, and yet the Buckeyes held the high-powered Fighting Irish to 28 points and 402 total yards.

Special teams: A-. The kickoff coverage was strong, Sean Nuernberger hit a trio of field goals (37, 38  & 35 yards), and Jalin Marshall and Curtis Samuel were solid in the punt and kick return game, respectively. Ohio State did kick a pair of kickoffs out of bounds, though.

It was over when: Ezekiel Elliott exploded for a 47-yard touchdown, his fourth scoring run of the day, moments after Notre Dame came up with a big scoring play to cut the deficit to seven points midway through the third quarter.

A look toward 2016: The Buckeyes will lose a lot of top-end talent, but this is Ohio State and Urban Meyer still is the coach. There will be no shortage of playmakers and NFL talent on the roster next season. Also: J.T Barrett returns under center as the full-time and unquestioned starter, which should benefit the offense.