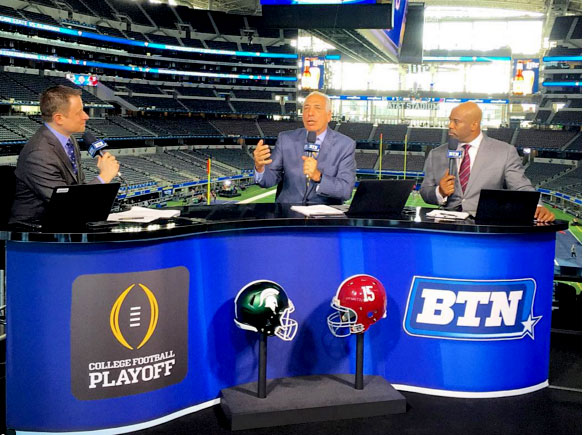 The College Football Playoff games are finally here tonight as Clemson faces Oklahoma ahead of Michigan State taking on Alabama. First, catch "BTN Live" at 6 p.m. ET today for the latest look at the Cotton Bowl matchup. Dave Revsine, Gerry DiNardo and Howard Griffith are in Dallas for the game and have reports from the stadium.

We'll also touch base with Mike Hall and Chuck Long in Pasadena as they'll bring you the latest from the Rose Bowl, where No. 5 Iowa will take on No. 6 Stanford.

What will BTN.com's Tom Dienhart be looking for tonight when the Spartans take on the Crimson Tide? Among other things, he sees the battle up front as being critical to Michigan State's chance at success. "Nick Saban has said this is the best defensive line he has had since becoming Tide coach," Dienhart writes.

"And, that?s saying a lot, considering some of the talent he has had in Tuscaloosa since taking over in 2007. Alabama is No. 1 in the nation vs. the run (74.0 ypg), allowing just 2.38 ypc with only six rushing TDs. Michigan State?s offensive line has been banged up but should be good to go in the Cotton Bowl. It may be the top front in the Big Ten, anchored by future first-round pick in tackle Jack Conklin and tough guy center Jack Allen."

There are multiple storylines in this game, of course. A decade before winning three national championships at Alabama, Nick Saban was the coach at Michigan State and Mark Dantonio was one of his assistants.

Before winning bowl games the past four years, Dantonio's first really good season as the Spartans' coach ended with an embarrassing bowl loss to the Crimson Tide and the coach he calls a mentor. They meet again now as two 12-1 teams representing their respective conferences. Read the full AP preview here.