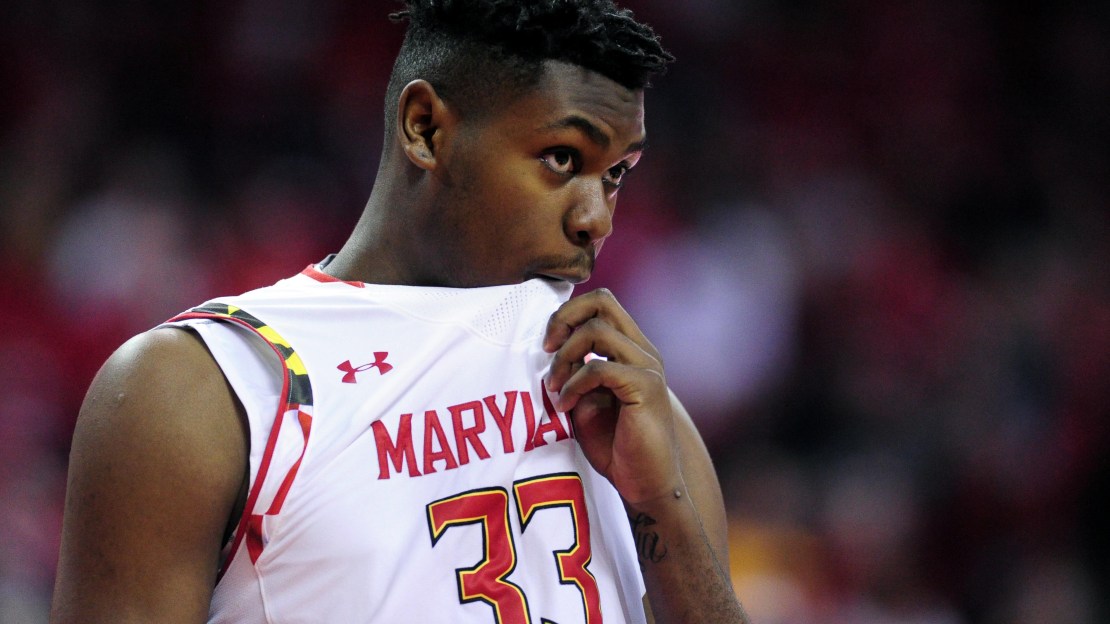 [btn-post-package]The team that opened my preseason Big Ten Power Rankings atop the list will open Big Ten conference play in the same spot.

Maryland, which spent the last four weeks at No. 2 or No. 3, wrestles away the top spot from undefeated and No. 1 Michigan State this week. The Terrapins have won five straight since its loss at North Carolina in the Big Ten/ACC Challenge, and they are as healthy and deep as any team.

1. Maryland (11-1). The Terps at the top spot is a combination of what they?ve got on the floor and coming off the bench and what Michigan State is forced to start Big Ten play without. Transfers Robert Carter Jr. and Rasheed Sulaimon have been terrific and Diamond Stone has provided a spark coming off the bench.
Last week: 2

2. Michigan State (13-0). The Spartans battled and earned a tough overtime win against Oakland without Denzel Valentine. Eron Harris and Bryn Forbes looked like elite scorers and the confidence they?ll gain in the absence of Valentine will help the Spartans in the end. It?s not about finding someone to replace Valentine?s production, you just have to make up for his numbers with numerous others.
Last week: 1

3. Purdue (12-1). The Butler loss does not affect my high expectations for the Boilermakers. They?ll learn how to play against a team who limits post opportunities and forces Isaac Haas and A.J. Hammons to defend away from the basket. Hammons has been a true light off the bench and I give him a lot of credit for accepting the role. The Boilermaker front court will wear down Big Ten opponents.
Last week: 3

4. Indiana (10-3). I?m tired of feeling like I have to defend Indiana when they score 90 (89.1) points per game. Yes, its defense is mediocre at times (actually quite often) giving up 70 points per game, but that?s partially due to the fact that there are more offensive possessions for opponents because of its uptempo style of play. I still think this team continues to improve and will cause problems for highly ranked teams in March.
Last week: 4

5. Iowa (9-3). The Hawkeyes have a chance to move up in the rankings and possibly jump into the Top 25 with a homecourt win against the No. 1 Michigan State. Even though Denzel Valentine is out, I think the depth of Michigan State will wear down the experienced core of Iowa. Jarrod Uthoff is playing like a first-round draft pick. If only he were a freshman, he?d be a lottery pick.
Last week: 5

6. Michigan (10-3). I?ve been critical of Michigan and have challenged their physical toughness, but it?s impossible to look past its talent and its great coach in John Beilein. I do think that the Wolverines will need five players scoring in double figures to be effective in Big Ten play, meaning Aubrey Dawkins (8.3 pts/game) and Zak Irvin (8.6 pts/game) need to continue to emerge as a scoring threat.
Last week: 6

7. Northwestern (12-1). The loss of Alex Olah for 2-4 weeks with a stress fracture in his foot will be difficult to overcome. Chris Collins played Dererk Pardon against Loyola, MD, who was supposed to be redshirting. Doug Collins had great things to say about Pardon, who may be able to fill the hole Olah leaves and end up providing frontcourt depth when Olah returns. A possible blessing in disguise for the Wildcats.
Last week: 7

8. Ohio State (8-5). I?m still not surprised by the Kentucky victory. Ohio State is incredibly talented and has multiple players who can play numerous positions, which leads to matchup nightmares for opponents. A.J. Harris was a key in their win over South Carolina State, and I?d expect to see more of him in place of JaQuan Lyle going forward.
Last week: 8

9. Illinois (8-5). This team just has to find a way to get to the NCAA tournament. The guard play of Malcolm Hill and Kendrick Nunn make this the kind of team no one would want to face in March. With injuries continuing to hurt the Illini, John Groce will help his team relish the underdog role, and I expect this dangerous team to play with a serious chip on its shoulder.
Last week: 9

10. Wisconsin (8-5). Like last week, I?m removing all pressure and expectation from the Badgers and Greg Gard. This is a new team since Gard took the helm on 12/15. The Greg Gard Badgers brought back some structure with the Swing Offense, and I think it?s just what this young team needs. They looked great for 30 minutes and spacing was much better than it?s been all season. They start off Big Ten play against Purdue on Tuesday, and we?ll see how this new team responds.
Last week: 10

11. Nebraska (8-5). I still don?t think this team has played to its potential yet. Shavon Shields and Andrew White III are pros, but this team needs to develop more scoring depth. Big Ten foes will be able to focus defenses on stopping Shields and White and it will be up to others like Glynn Watson and Tai Webster to produce on the offensive end.
Last week: 11

12. Penn State (9-4). I like this team and Pat Chambers much more than where I have them, but this shows the consistent depth of the conference. I do believe that the 6-12 spots in the Big Ten are wide open and that Penn State, with good guard play and a stretch 4 in Brandon Taylor could easily slide up into the top 8 or 9.
Last week: 12

13. Minnesota (6-6). It is hard to believe that the Gophers are .500 heading into Big Ten play. Losing 4 out of the last 5 games, momentum heading into matchups against Ohio State and Michigan State is certainly lacking. I have not been able to figure out the identity of this team yet, and I believe that is something that is a work in progress for Richard Pitino and his staff.
Last week: 13

14. Rutgers (5-7). Losing to Monmouth, which is a much younger/smaller sibling to Rutgers in the state of New Jersey, is not a good sign. Recruiting to Rutgers is tough enough, as it is, with so much competition in the region, which puts maintaining the NJ state pecking-order at a premium. It doesn?t get any easier for Rutgers as it faces Indiana, Wisconsin and Maryland to start Big Ten play.
Last week: 14