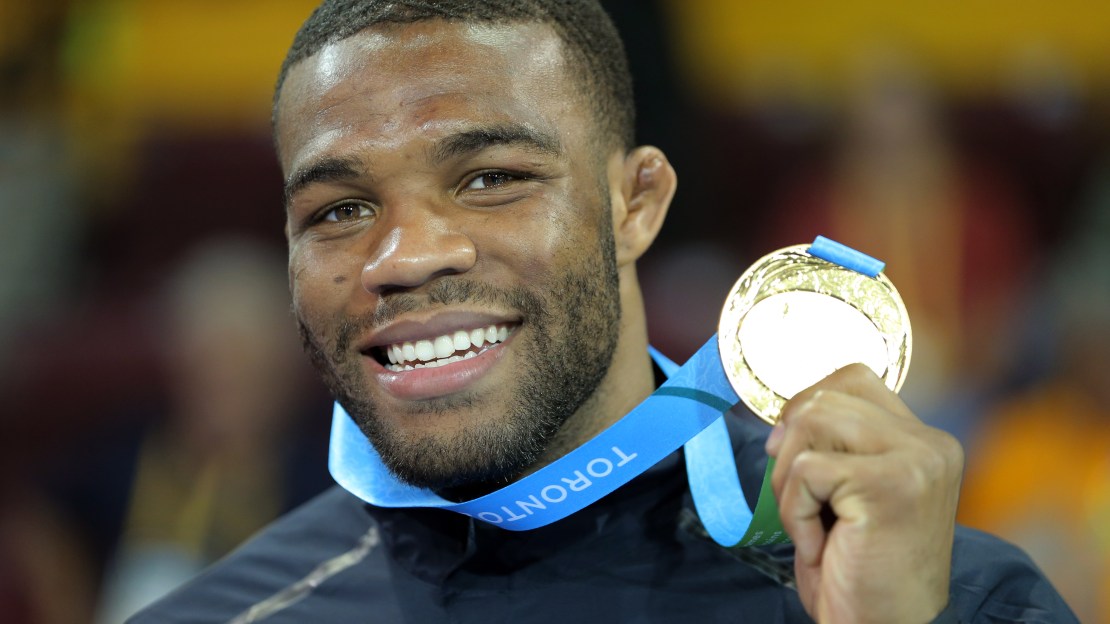 It's great to be a Jordan! Ohio State's Micah Jordan along with three-time World Champion and Olympic Champion Jordan Burroughs (a Nebraska product) earned sprinkles on their ice cream this week. I startw ith that in this week's Wrestling Report.

Ranked No. 16 heading into the Cliff Keen Invitational, Micah Jordan claimed the title at 141 pounds with wins over top 10-ranked Solomon Chishko of Virginia Tech in the semi-finals and then No. 13 Todd Preston of Harvard in the finals.

The Buckeye jumped eight spots to crack the top 10 in the rankings in a weight class that I feel is as wide open as any. For his accomplishments the red-shirt freshman earned ?Big 10 Wrestler of the Week? honors.

Burroughs won his third world title this past September in Las Vegas outscoring his opponents 45-5 as he improved his overall record to an astounding 114-2.

Only John Smith (6) and Bruce Baumgartner (5) has won more World and Olympic gold medals than Burroughs in a career.

The Cliff Keen Invitational boasted top talent from around the country and gave us some great early season battles. In one of the most anticipated matches, returning 125-pound national champion and No. 1 ranked Nathan Tomasello of Ohio State edged No. 3 Joey Dance of Virginia Tech 5-4 in the championship match.

The Buckeyes finished fifth as a team without having Bo Jordan in the lineup. Buckeyes coach Tom Ryan informed me that Bo will be dropping to 165 for sure. I asked Ryan if they were pulling Myles Martin's redshirt at 174 and he said they will be watching Myles closely.

In the finals of last weekend's Nittany Lion Open, Martin dropped a 4-3 decision to No. 5 Bo Nickal of Penn State. My gut tells me Martin is going to be the Buckeyes answer this season at 174. Even with World Champion Kyle Snyder red shirting as he prepares to make a run at Olympic gold, the reigning NCAA Champion Buckeyes expect to be in the mix when all is said and done.

After missing most of last season because of injury, Hunter Stieber should also be back at 149. Ohio State has question marks for sure, but you can't count out a Tom Ryan coached team. As one of the best CEO's in college wrestling, Ryan does an amazing job leading that program. The eighth ranked Buckeyes meet No. 11 Missouri Saturday in Columbia.

Minnesota was the highest-placing Big Ten team in Vegas, finishing in third place behind Missouri and Cornell. The Gophers' Brett Pfarr at 197 and heavyweight Michael Kroells led the way with second place finishes. I've been impressed with the progress of Jake Short at 149, who placed third. Short was not even ranked heading into last week and now finds himself at No. 10. At 141 pounds Tommy Thorn was third.

The Gophers got off to a slow start, but this young team has been wrestling well the past couple weeks. Tonight is the 30th Big 10 opener for legendary coach J Robinson as his Gophers host Indiana. Interesting to note that all 10 Gophers who will wrestle tonight are from the state of Minnesota.

Michigan placed seventh as a team, led by Domenic Abounader who lost to returning NCAA Champion Gabe Dean in the championship match 15-6. The Wolverines have been struggling a bit as of late, but opened up their conference schedule Thursday night with a 39-6 win over in-state rival Michigan State. The Wolverines used a major decision, four tech falls and a pin to over power the Spartans.

Iowa won eight of the ten matches against a Rutgers team that has gotten off to a nice start for a 29-6 victory. Over 6,700 fans came to Carver-Hawkeye Arena for ?Ugly Sweater Night.? I might add that Iowa Head Coach Tom Brands looked pretty dapper in his yellow and black striped sweater. I like to see any kind of promotion at a wrestling match to help add to the event.

The Hawkeyes held a 31-7 advantage in takedowns and a 98-44 upper hand in match points. Good signs for Iowa were Edwin Cooper at 157 and Hwt. Sam Stoll earning victories against ranked opponents for the first time this season. Stoll knocked off No. 6 Billy Smith in overtime as he improved his record to 7-1. A big key for Iowa is production at 141, 157, 165 and heavyweight. Iowa is now off until Midlands later this month.

Rutgers won't have much time to lick their wounds as they host No. 3 Nebraska at the RAC Saturday afternoon. Big matches at 141 as undefeated Anthony Ashnault (No. 3) meets No. 17 Anthony Abidin and at 165 pounds where Nebraska's No. 4 Austin Wilson squares off with No. 12 Anthony Perrotti.

Top ranked Penn State welcomes Wisconsin to the Bryce Jordan Center Sunday afternoon. PSU is coming off the Nittany Lion Open where they crowned seven champions. Wisconsin visits Pittsburgh Saturday before heading to State College. The Badgers are led by Isaac Jordan (No. 3 at 165) who captured the Cliff Keen Invitational by beating Purdue's Chad Welch 5-3 in the all-Big Ten final.

Jordan remains undefeated for Barry Davis and the Badgers. Ryan Taylor (No. 4 at 133) will take the mat for the first time this season. He will get a nice test against two ranked opponents including No. 8 Jordan Conaway of Penn State. Clear the mats!

I'm on Twitter so be sure to come find me. On that note, here's a nice collection of tweets from around the Big Ten wrestling community with videos.

Check out some highlights and reaction to the 29-6 @Hawks_Wrestling win last night at Carver-Hawkeye Arena: https://t.co/4jVrNWkUAX

Check out what the Cliff Keen champ had to say after getting off to a great start this season! #Badgers https://t.co/dtMEicdM99