Dienhart: One storyline for every 2015-16 Big Ten bowl game 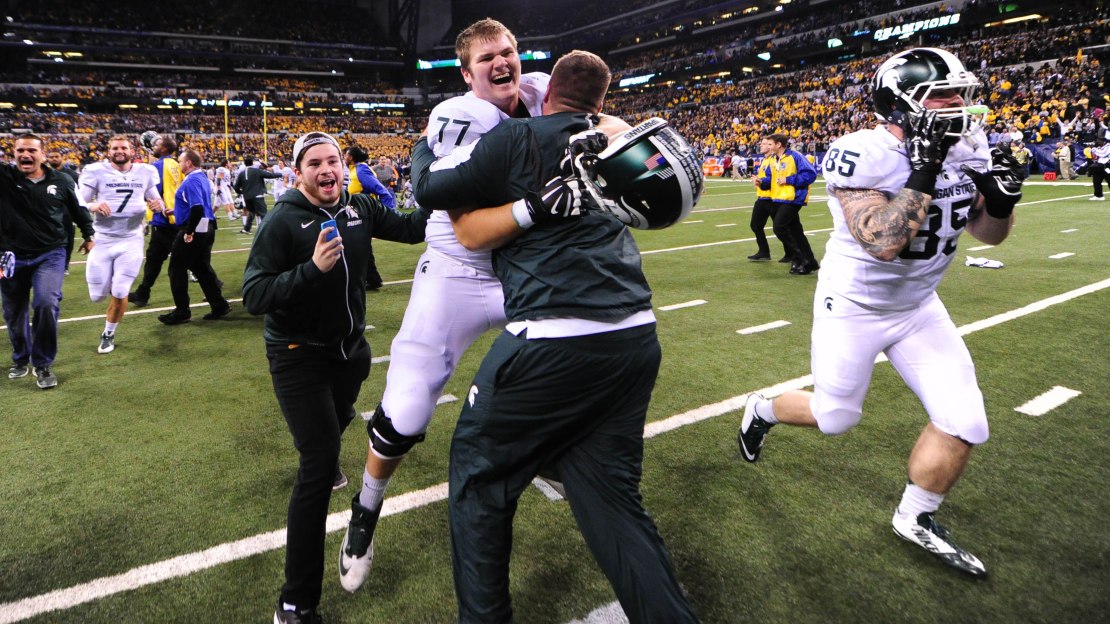 Every game has a storyline, right? So what are they for the 10 Big Ten bowl teams? From Michigan State and its playoff matchup with Alabama in the Cotton Bowl to Minnesota and its battle vs. Central Michigan in the Quick Lane Bowl, here is what to watch for.

Indiana. Just getting to a bowl is a big deal for the Hoosiers, who last went in 2007. In fact, this is just the program?s second postseason trip since 1993. The last time IU won a bowl? It was in 1991, when the Hoosiers beat Baylor in the Copper Bowl in a clash between icons Bill Mallory and Grant Teaff. The story, as usual, for Indiana will be offense, offense, offense. Can the Nate Sudfeld-led attack score enough to topple Duke in the Pinstripe Bowl? Neither team plays much defense, so offense should rule.

The field at Yankee Stadium is already stenciled out for the @PinstripeBowl. Just 18 days from kickoff. #LetsDigIn pic.twitter.com/adFV2XWXMp

Iowa. Yes, the Hawkeyes saw their unbeaten run end in the Big Ten title game. But a bid to the Rose Bowl is another magical event in this dream season. Hayden Fry went 0-3 in Pasadena. Can Kirk Ferentz get the Hawkeyes their first Rose Bowl victory since the 1958 season? If so, that probably would mean a top-four finish in the final polls and set up the Hawkeyes for a high preseason ranking in 2016 with QB C.J. Beathard back. Remember when Iowa was coming off a 7-6 season that caused the native to be restless?

Michigan. Back in the preseason, most pundits felt an 8-4 record was possible in Jim Harbaugh?s debut. Well, the Wolverines went one better with a 9-3 mark. Now, with a win vs. Florida in the Citrus Bowl, Michigan could be a 10-win team. That would give an already hot program even more mojo heading into the recruiting stretch run. A key to Michigan winning won?t be defense? Have you seen the UF offense? Horrid. Nope, the Wolverines need to get their attack on course vs. a rugged Gator defense. Can the o-line-especially the interior-get a steady push?

Michigan State. The Spartans achieved another milestone under Mark Dantonio, adding a playoff appearance to an already-impressive resume in East Lansing. Can Michigan State march all the way to the national title? Maybe. The Spartans won back-to-back national championships in 1965-66. To win another, MSU will need to win the battle in the trenches vs. Bama while also protecting Connor Cook from a fierce Tide rush and slowing Alabama back Derrick Henry.

A lot of impressive names here, and it's @MSU_Football's foe on top.

Minnesota. Freshly minted head coach Tracy Claeys looks to put his stamp on the team he takes over from mentor Jerry Kill. The 2015 season dawned with the Gophers dreaming of winning the West after consecutive 8-5 seasons. But injuries proved ruinous, as the team regressed on both sides of the ball in what has been a disappointing 5-7 season in Dinkytown. The goal vs. Central Michigan in the Quick Lane Bowl? Play some of the trademark defense the program has become known for the last few years.

Nebraska. Yes, it?s only the Foster Farms Bowl. But the Cornhuskers are happy to be headed there to play UCLA. At 5-7, Nebraska shouldn?t be bowling in Mike Riley?s debut. But a shortage of 6-6 teams opened the door for the Huskers and two other 5-7 clubs to make the postseason. This is a chance for Nebraska to end an often frustrating season marked by myriad tough losses with a win. Will the Husker pass defense hold up vs. UCLA and its young gun QB Josh Rosen? And keep an eye on QB Tommy Armstrong, who can bolster the confidence of coaches with a strong effort.

One more opportunity to get better.

Northwestern. The Wildcats are looking to punctuate a season of glory that already has seen them win 10 games. That?s as many as NU won combined in 2013 and 2014. A victory vs. Tennessee in the Outback Bowl would give Northwestern its first 11-win season ever. To reach that milestone, NU will need big efforts from the two areas that have carried it all season: the running game and defense.

Ohio State. The Buckeyes were supposed to be making a run at defending their national championship. Instead, Ohio State is playing Notre Dame in the Fiesta Bowl. Not a bad destination or foe, but this isn?t where OSU wants to be. Will the Buckeyes be motivated? Taking on a good Fighting Irish squad should be incentive. All eyes will be a Buckeye offense that looks to pick up where it left off in a demolition of Michigan. How will Ezekiel Elliott play in his final game in Scarlet & Gray?

Penn State. James Franklin is looking for a signature win in his second season at Penn State. Knocking off Georgia in the TaxSlayer Bowl would be it. To do so, the Nittany Lions offensive line needs to protect Christian Hackenberg and get a push to create running room for Saquon Barkley for an attack that has a new offensive coordinator after John Donovan was fired. How will a Bulldog squad being led by an interim coach perform? It?s always an X-factor.

Mangiro putting perfectly into words how fired up we are to hear the roar in Jacksonville. https://t.co/whgk7VTpvW https://t.co/PYeR5zstuF

Wisconsin. Paul Chryst?s debut has seen the Badgers play a lot of good defense under coordinator Dave Aranda. The offense? It has been less-than-spectacular. Issues along the line have impacted greatly, as well as injury to running back Corey Clement that essentially ruined what was supposed to be his breakout season. All eyes will be on the UW offense in the Holiday Bowl clash vs. USC. Can the maligned o-line that has been hampered by youth get a push? Will quarterback Joel Stave make some plays with his arm and avoid mistakes? But perhaps the biggest storyline will be the Trojans? high-power attack led by QB Cody Kessler locking up vs. a Badger defense that is No. 1 in the nation in scoring.

#Badgers fans, you'll want to be a part of this. Buy your @HolidayBowlGame tickets now -->> https://t.co/rmynvcE49U. https://t.co/KHyopLU0Sx