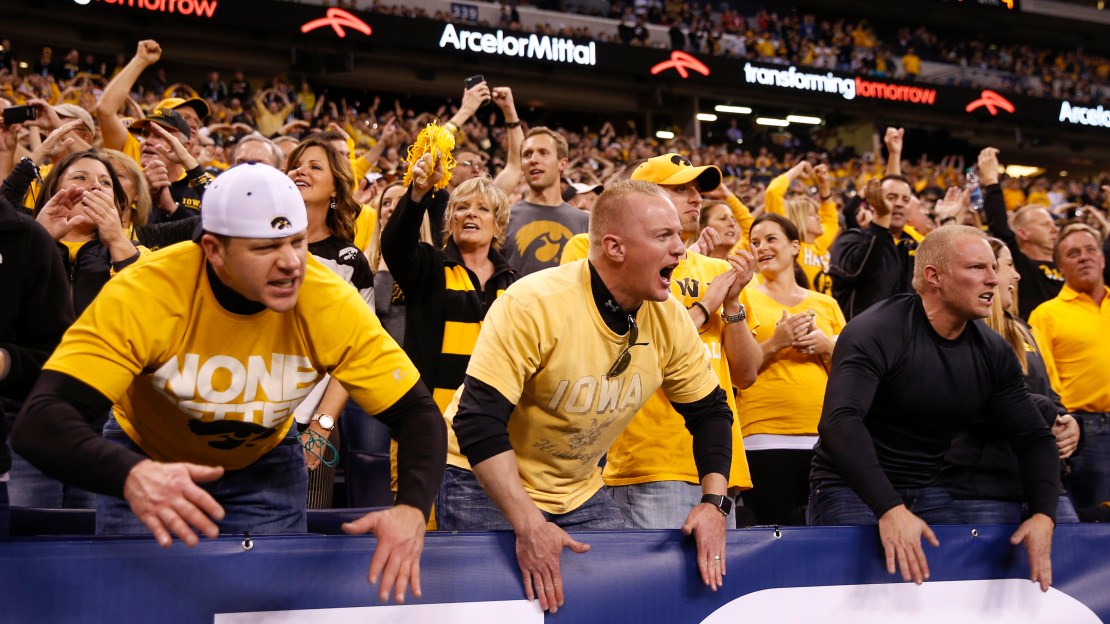 I was so glad to see Iowa get a Rose Bowl bid despite losing the league title game. The Hawkeyes haven?t been to Pasadena since the 1990 season. The drought is over. Iowa fans will overrun the Rose Bowl. It will be beautiful.

Iowa will play Stanford, which it never has played. The Hawkeyes last played in the Rose Bowl in 1991 and lost to Washington 46-34. The Hawkeyes played in three Rose Bowls during the Hayden Fry era and lost all three. Kirk Ferentz was an assistant coach on the first two teams. Iowa appeared in two other Rose Bowls in 1957 and 1959 and won both.

Speaking of the end of droughts, Indiana is bowling for the first time since 2007, taking on Duke in the Pinstripe Bowl. This is perfect.

It isn?t a playoff game or New Year?s Day Six Bowl, but the Citrus Bowl clash between Michigan and Florida may be the best of all the other bowls.

The Gators won the SEC East, losing the league title game to Alabama. Florida?s offensive coordinator? It is Doug Nussmeier, who ran the Wolverines' offense in 2014 under former head coach Brady Hoke. Michigan's recent bowl history hasn't been kind. The Wolverines are just 2-7 in postseason games since dropping the Rose Bowl to USC on Jan. 1, 2004.

Yes, if Rutgers had beaten Maryland to finish 5-7, it would have gone to a bowl.

Penn State vs. Georgia in the TaxSlayer Bowl. I can?t help but think of the Sugar Bowl after the 1982 season when the schools met and the Nittany Lions won the national title with a win vs. Herschel Walker and the Bulldogs.

UGA will be without newly appointed coach Kirby Smart, who will remain with Alabama during its playoff march. Bryan McClendon will be the interim coach.

The Ohio State-Notre Dame Fiesta Bowl will be a much-anticipated clash between iconic programs. Cleveland.com has seven things to know about Brian Kelly and the Irish, who came close to making the playoffs-just like OSU.

In fact, ND may have made the playoffs if not for myriad injuries. Notre Dame has lost nine starters this season to various injuries. To say the Irish are banged up would be an understatement. That they still had a shot in the playoff and are now in this game with those injuries speaks to their depth-and Brian Kelly?s coaching.

Hard to believe with what Nebraska has endured, it will go bowling. It will be with a 5-7 mark-one of three teams in the nation to do so with a losing record. The clash with UCLA in the Foster Farms Bowl could be kinda good, too.

Minnesota is another ?loser? headed to a bowl with a 5-7 mark, going to the Quick Lane Bowl. Hey, mock if you want. But this is a chance for Tracy Claeys to put his stamp on this program.

Minnesota will make its fourth consecutive bowl appearance and will play Central Michigan, which finished third in the MAC West division this season.

On a down note this past weekend, the Gopher hoop team got dumped in double OT at home by ? South Dakota. Is it the worst defeat for the program in a decade?

Marcus Fuller of the St. Paul Pioneer Press notes the Gophers had their 47-game non-conference home win streak snapped Saturday against the Coyotes, who just joined Division I basketball seven years ago. It?s definitely the worst loss for Minnesota?s program under third-year coach Richard Pitino. The last non-conference home loss was to Virginia in the ACC/Big Ten Challenge back in 2010. South Dakota lost to Kansas State on the road by 21 points this year, but this is a young Minnesota team that was feeling too good about itself after beating Clemson on Monday. An even longer streak of 68 straight wins against non-major conference foes at home came to an end Saturday. That dates back to what Fuller thinks was the Gophers? worst loss in the last decade: 67-66 to Arkansas-Little Rock in 2006-07.