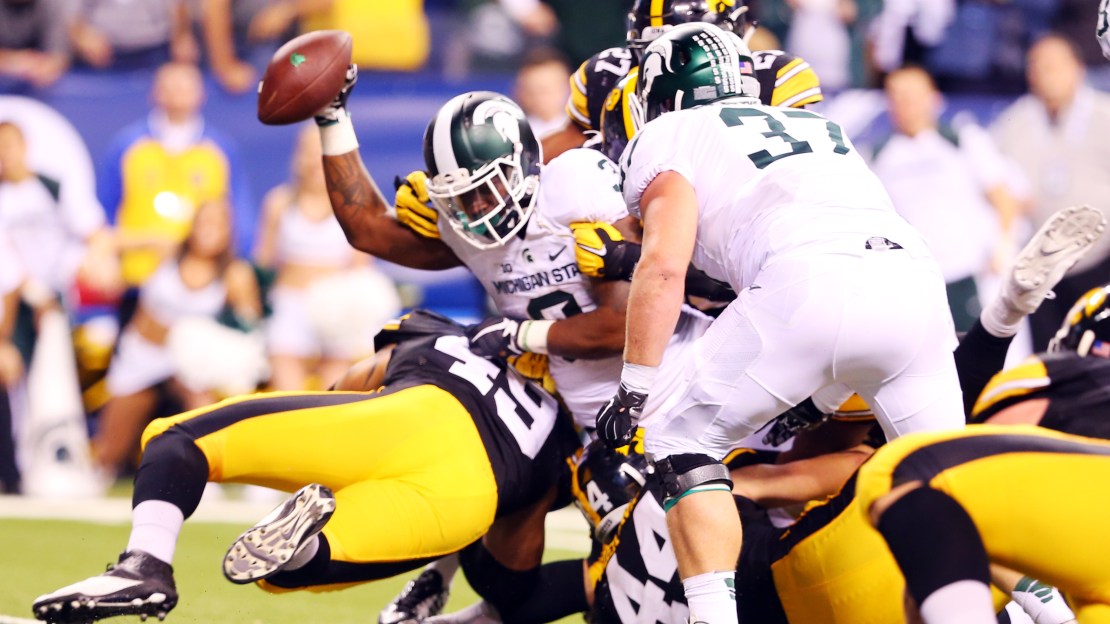 INDIANAPOLIS — LJ Scott kept his legs driving. One defender tried to drag him down by his pads, another jumped on his back, and third went for the legs. It didn't matter. The Spartans' running back wasn't going to be denied.

On his 14th carry of a 22-play drive that will go down as one of the greatest in Michigan State history, Scott extended his right arm and, using every last bit of momentum he had, stretched the ball over the goal line. Touchdown MSU — game over!

On a team loaded from top to bottom with upperclassmen playing in their second Big Ten championship game in three years, it was a true freshman who was the unsung hero.

"At first, I honestly didn't think I was going to get in," Scott said. "Then I reached over and it happened.

"I just kept telling myself to keep my legs pumping. It's amazing. I guess dreams do come true."

Yes, they do, but this isn't the first fairy tail ending for the Spartans this season.

There was the miracle punt block, which was returned by Jalen Watts-Jackson for a game-winning touchdown at in-state rival Michigan.

There was the game-winning field goal by Michael Geiger to top Big Ten favorite Ohio State, ending the Buckeyes' dreams of a repeat Big Ten championship.

And then there was Saturday night, facing an Iowa team that had held the Spartans to a measly nine points heading into the final quarter.

Iowa led for all but 6:08 of the game, but just like they did against Michigan and Ohio State, the Spartans closed out the game in the final seconds, when it mattered most.

"I guess we kind of are a team of destiny," MSU senior lineman Jack Allen said following the game. "I think that final drive just shows you what kind of team we are."

A team that is now 12-1 on the season, and following Saturday night's Big Ten championship win, is all but guaranteed a spot in the second annual College Football Playoff, which will be announced on Sunday afternoon.

"We're not in yet, so we're just enjoying the night as Big Ten champions," MSU coach Mark Dantonio said. "I would expect it just gives us another thing to maybe celebrate tomorrow. That's the way I'm looking at it."

Underdog is no longer a relevant word when talking about these Spartans. MSU has now won two Big Ten championships in three years. They may not be where everyone predicted them to be at the start of the season, but now, they are where every other team wants to be — conference champions and likely headed to the four-team playoff.

Saturday night was an exclamation point, a rallying cry for a team that struggled to get anything going on the offensive side of the ball for much of the night, and then, when it mattered most, it was Scott who made Lucas Oil Stadium erupt in "Go Green, Go White" chants.

After the game, Scott was asked why the coaches had confidence in him on the biggest drive of the season up to this point.

"I couldn't tell you why," he said. "But I'm sure glad they do… I guess they know what they're doing."

Truer words have never been spoken.