Jon Crispin: My take on the new 'Freedom of Movement' rule 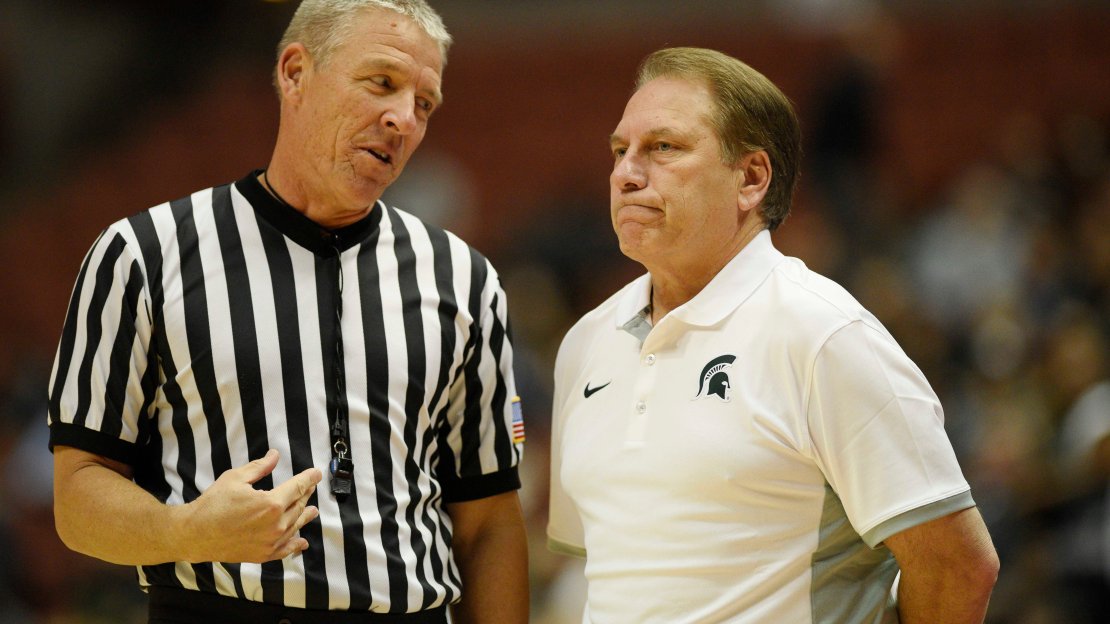 Over the past few years, the style of play and ?entertainment value? of college basketball has been under attack. Most of the individuals who took issue with the occasional lack of scoring and slow pace don?t even coach or play the game. Even UConn women?s coach Geno Auriemma voiced his displeasure, calling the men's college game, ?boring.? Truthfully, his opinion on the men?s game doesn?t matter, but numerous rule changes to (ideally) free up the game and make it more entertaining and fair were implemented this season.

One of the many new rule changes allows for greater freedom of movement for players without the ball, and it came under scrutiny in No. 3 Michigan State's 77-64 win over Providence in the John Wooden Legacy final Sunday night.

The matchup featured two of the game's premier stars in Michigan State's Denzel Valentine and Providence's Kris Dunn, arguably the best guard in the nation. It was enough to attract Magic Johnson, Chris Paul and countless scouts and NBA agents to the arena.

Problem is, foul trouble limited Valentine and Dunn's minutes, to the point that the former played a season-low 26 minutes after picking up his third foul early in the second half and the latter was called for his fourth foul with eight minutes left.

It?s important to note that Izzo wasn?t complaining after a loss. His team won. He was simply expressing himself due to the fact that both teams? star players were forced to the bench because of fouls that did not impact the play or the outcome of the game. The motive behind the rule changes imposed by the NCAA are pure and consistent with what they are trying to achieve. But, clearly, the impact of these rule changes is doing more to slow down the game than anything else at the moment.

One of the most notable and obvious issues I see with the emphasis on ?Freedom of Movement? is that it actually takes the rhythm and the flow out of the game. The NBA game doesn?t have this issue because the NBA game has different rules and also showcases the best players in the world. The collegiate game is more physical because of the nature of the game and the skill of the players playing it. NBA teams rely on individual skill to create opportunities on the offensive end, while most collegiate teams and coaches have set plays to create scoring opportunities. Defending those sets (plays) does require more physicality on the defensive end. In no way should any defender allow an offensive player to simply cut across the lane without impeding his movement. The contact that is made in these situations has become the issue. Off-the-ball fouls have picked up more this year than ever before and a play that has no impact on the offensive possession or the game has become a foul that not only impacts the rhythm and flow of the game but puts numerous players in foul trouble.

"There is a difference between freedom of movement and touching a guy 30 feet from the basket," Izzo said. "If you're impeding progress, that is a foul. It's not the officials' fault. They're scared to death. That's the way they're mandated to call it."

Izzo is right. These officials are some of best in the world at what they do. They don?t just show up and blow the whistle. They study, they?re held accountable for all calls (wrong and right), and they do their best to create an environment that is fair for both teams. That being said, I expect to see these professionals develop a better sense for what I refer to as ?Freedom of Contact? throughout the course of the season. Officials do a great job of adapting to the game, just like players and coaches. At the moment, NCAA officials are doing their jobs well in the sense that they are following the letter of the law.

My ?Freedom of Contact? may never become an actual point of emphasis, but I can tell you that the collegiate game will open up as the season progresses. Players and coaches will grow accustomed to how the game is being called. Officials will do as they have always done and will develop a better sense of what fouls impact play and need to be called and what fouls are simply a case of 10 large men occupying the same space at the same time.

Izzo?s concerns are valid regardless of whether you?re a Spartan fan or not. That being said, the officials are also doing their jobs well. In the meantime, I encourage coaches and players to continue to learn how to play without fouling, and I beg fans to hang in there as any rule changes or progress at that takes time. In the end, the game will be better.