Could an undefeated Iowa team be left out of the playoff? 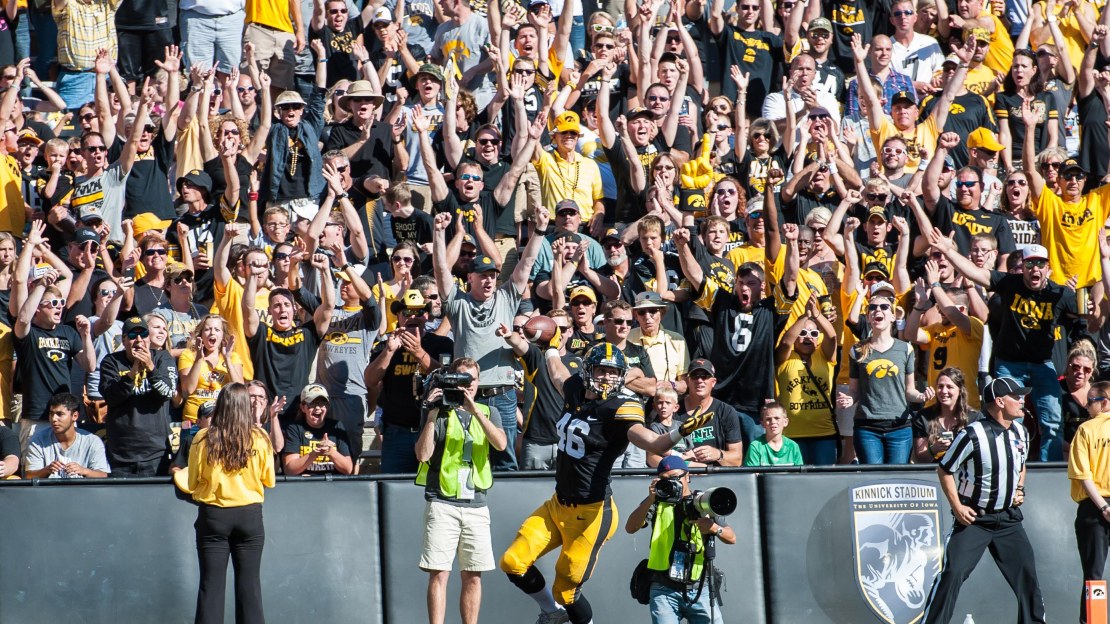 The initial 2015 College Football Playoff rankings were revealed on Tuesday night, which brought up plenty of questions throughout the landscape.

A one-loss Alabama team was ranked No. 4 in the initial poll, coming in ahead of undefeated Michigan State (No. 7) and Iowa (No. 9).

Baylor also took a spot ahead of Spartans and Hawkeyes, despite having one of the weakest schedules in the nation.

The winner of the Nov. 21 clash between Ohio State and Michigan State will likely represent the Big Ten East in the conference title game, while Iowa looks to be a strong favorite to represent the West in Indianapolis. Both Michigan and Penn State are still technically in play in the East, while the same can be said for Northwestern and Wisconsin in the West.

If this all plays out according to plan and it is Ohio State or Michigan State vs. Iowa in the Big Ten title game, and the Hawkeyes win that game, finishing the season with a perfect 13-0 record, will Iowa have a spot in the College Football Playoff?

QUESTION: Could an undefeated Iowa team get left out of the College Football Playoff?

DIENHART: No. If Iowa wins the Big Ten with a 13-0 record, I don?t know how it could be left out of the playoffs-regardless of what happens in the other leagues. The Hawkeyes will have some nice wins, headlined by road victories vs. Wisconsin and Northwestern-who both were ranked at the time. And a non-conference win vs. Pitt also is impressive. To top it off, Iowa would have toppled a likely unbeaten team in the Big Ten title game. Add it all up, and that would be a very impressive resume. It?s all in Iowa?s control. Just keep winning each week-and ignore what else is going on. Control what you can control. An unbeaten champion from what realtimerpi.com rates as the nation?s No. 3 conferences left out of the playoffs? Preposterous.

MERRIMAN: Yes. My good friend Jack Ebling asked me this question back in mid-October, and now that the college football regular season is heading down the closing stretch, I can't help but to think about it. Now, keep in mind, the question says "could they get left out," not "should they get left out." Right now, there are eight teams ranked ahead of the Hawkeyes in the only poll that matters. The committee clearly showed they value the "eye test," which is why a one-loss Alabama team is ranked ahead of both MSU and Iowa. Because of that, I don't see any possible way an SEC team is left out of the playoff. Are you going to drop Alabama if they win out? No. Are you going to drop LSU below an undefeated Iowa team if its only loss is to the Crimson Tide? I doubt it. So, that leaves two spots left. The Big 12 schedule is extremely back-loaded, meaning the criticism Baylor, TCU and Oklahoma State received for having weak schedules will be thrown out the door in the upcoming weeks. Therefore, if one of those three teams goes unbeaten, I think it gets in, even without having a conference title game. Now, the wildcard here is Notre Dame, which was rewarded for playing a tough schedule. But if Notre Dame wins out, how do you drop them and elevate Iowa above the Irish? To win out, Notre Dame would have to beat Pitt this weekend, which Iowa already beat, and a potential one-loss Stanford team (which could also get in) in the final game of the season. Wouldn't the committee be more impressed with the combination of those two wins than Iowa's wins over Indiana and Ohio State or Michigan State? There is still a lot of football to be played, but to summarize my argument, if the ACC and Big 12 each have an unbeaten team at the end of the year, I could certainly see those two teams, a one-loss SEC team and either a one-loss Notre Dame or Stanford team getting in over an undefeated Iowa team. Should it be that way? No way. Could it be? Yes.