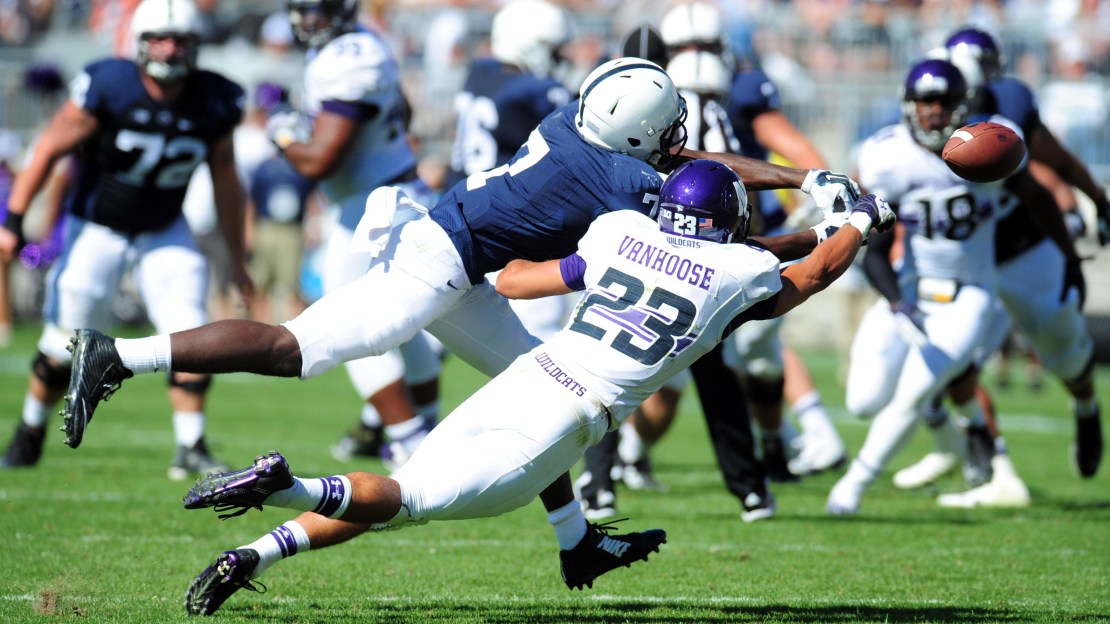 All 14 teams are in action. But there is only one matchup this week featuring teams that both have winning records: Penn State (7-2) at Northwestern (6-2).

But intrigue bubbles elsewhere. Like, in Bloomington, Indiana, where the Hoosiers entertain undefeated Big Ten West leader Iowa, which must knock off an Indiana team that has given Ohio State and Michigan State (for three and a half quarters at least) trouble if it wants to remain in the playoff discussion. Or in Lincoln, Nebraska, where the struggling and upset-minded Huskers host Michigan State.

Let?s take a look at all seven Week 10 games.

That?s three losses in a row for the Fighting Illini. The lack of big-play ability on offense is crippling. Illinois is averaging 11.8 points in conference play, which is five fewer than any other team. The attack misses RB Josh Ferguson. He got hurt in the Nebraska game and has missed the last three games, as Illinois has a total of 138 yards rushing while averaging 2.2 yards per carry. Will Ferguson play this week? The Illini haven?t gained more than 55 yards on the ground in any of their last three games. And the defense is springing leaks, too. Where is the pass rush? Illinois has just 12 sacks, second fewest in the league. The Boilermakers have a modicum of mojo coming off of their first home conference win in the Darrell Hazell era. Purdue ripped off 55 points in topping Nebraska; conversely, Illinois was shut out at Penn State. QB David Blough may be a keeper, breaking out vs. the Huskers to earn Big Ten offensive player of the week honors. The Boiler defense also feels confident after notching five turnovers last week.

How good were the Nittany Lions in a 39-0 win vs. Illinois? James Franklin called the performance the most complete his team has had in his two years on the job. QB Christian Hackenberg is thriving, accounting for 15 touchdowns (12 pass, two rush, one rec) without an interception in his last six games. He needs two touchdown passes to break Matt McGloin?s school-record for most TD passes in a career. The defense leads the FBS ranks with 35 sacks. End Cal Nassib is indomitable with a national-high 14.5 sacks and 18.5 TFLs. Northwestern is coming off a bye following a big win at Nebraska that snapped a two-game losing skid. The Wildcats are still looking to regain the mojo they had in starting 5-0. Northwestern scored 30 points in its last game against Nebraska. Can the offense keep it up against a Penn State team that just shut out Illinois? The Wildcats are last in the Big Ten in scoring on the season, averaging 20.9 points. QB Clayton Thorson must continue to develop as a passer and decision maker. Even more vital: Getting RB Justin Jackson established vs. a tough PSU d-line.

Two teams going in opposite directions. Last week, the Badgers welcomed back RB Corey Clement, who hadn?t played since the opener because of a sports hernia injury. His added juice sparked the offense, running for 115 yards and three TDs vs. Rutgers. The Badgers scored 48 points, which was easily their most in a Big Ten game this season. Wisconsin?s defense has been stout all season. How stout? The Badgers are leading the nation in scoring defense, allowing 11 points per game. The Terrapins have lost five straight games. They need to win four more if they want to make a bowl game. It will be tough. The offense has shown life under interim coach Mike Locksley, but a national-high 28 turnovers have been killer. The defense? It often has been trampled. Maryland has allowed at least 28 points in six of its eight games this season. The Terrapins are 99th in the nation in scoring defense (33.8 ppg) and 92nd in total defense (425.3 ypg).

WATCH: Last week's "Ask the #Badgers." Who is the most famous person you've met? https://t.co/ZkNFfNXbiq

To say that the Scarlet Knights? defense is struggling would be a vast understatement. In the last three games-vs. Indiana, Ohio State, and Wisconsin–Rutgers allowed 149 points and 1,581 yards. The Scarlet Knights have been outscored by 77 points in these three games and are allowing 7.5 yards per play. Not good. RU needs WR Leonte Carroo in the lineup. He missed last week with an ankle injury. And, it showed. The Scarlet Knights had only 82 passing yards. Carroo has nine touchdown catches, which is three more than any other Big Ten player. And he?s done so despite playing in just five games. The guy is a stud but is listed as questionable. The Wolverine defense is coming off its worst effort of the season, at Minnesota. And then there is this: Over the last two weeks, Michigan has been outgained 847-526 in total yards. Is there any cause for concern going forward? This offense needs more explosiveness, which is why DB Jabrill Peppers plays so many offensive snaps. QB Jake Rudock was banged up at Minnesota and had to leave the game. Wilton Speight was able to lead the team on a game-winning TD drive. However, Rudock thinks he?ll be able to play in this game.

The perfect Hawkeyes have playoff dreams dancing in their head as they look to continue to augment their resume. But Iowa is banged up. RB Jordan Canzeri missed the Maryland game with an injury and QB C.J. Beathard admitted he wasn?t 100 percent vs. the Terps. The Hawkeyes will likely be favored in their final four games (at Indiana, Minnesota, Purdue, at Nebraska) and have a legit chance to finish the regular season undefeated. The records of their final four opponents: A combined 13-20. The Hoosiers are coming off a bye looking to snuff out a four-game losing streak that has sullied a 4-0 start and threatens the program?s quest to end a bowl drought that dates to 2007. Defense continues to be an issue in Bloomington. IU has allowed 50 or more points in its last two games. The fourth quarter also has been a problem. Indiana has been outscored 70-10 in the final 15 minutes in the last four games. The Hoosiers have been shut out in the fourth quarter in the last three games.

The Spartans took it easy on their bye week, not practicing while trying to convalesce a battered roster in their pursuit of a playoff spot. Michigan State hasn?t hit on all cylinders all season because of injury, especially along the offensive line and in the secondary. Still, MSU has won 12 in a row. Thank QB Connor Cook. He has a career mark of 31-3, which is the best winning percentage (91.2 percent) among active FBS QBs. Cook has thrown for more than 300 yards in three straight games. In that span, he has 1,093 yards passing with seven touchdowns and one interception. He has 17 touchdowns and just two interceptions this season. The Spartans are trying to start 9-0 for the first time since 1966 when they went 9-0-1. Nebraska enters this game reeling. The defense has been abysmal, ranking 90th overall (424.3 ypg), 75th in scoring defense (28.1 ppg), and 124th in pass defense (315.9 ypg) in FBS. This attack needs QB Tommy Armstrong, who missed the loss at Purdue with a foot injury. Good news, Armstrong is practicing. But RB Terrell Newby may be out after being knocked out of the Purdue game. Nebraska needs to win out to avoid missing a bowl for the first time since 2007 when it went 5-7. https://twitter.com/Huskers/status/661228149531799553

The Golden Gophers will try to move on from a difficult home loss to Michigan that saw the Gophers? surge for the winning TD get stuffed at the goal line on the game?s final play. This, after eschewing a potential game-tying field goal following some dubious decision making and clock management by the staff. It wasn?t an ideal start for interim coach Tracy Claeys, but he can take solace in knowing his team largely outplayed Michigan. Now, Claeys and the Gophers must wade into Columbus, Ohio, to play America?s No. 1 team with bowl hopes waning. Minnesota QB Mitch Leidner enters this game with a lot of confidence despite the Gophers losing their last two games. He has thrown for more than 300 yards against Nebraska and Michigan while completing nearly 58 percent of his passes in that span. Winners of 21 in a row, the Buckeyes were off but made headlines with the arrest and subsequent suspension of QB J.T. Barrett. With Barrett out after making his first start of 2015 in OSU?s last game, Cardale Jones takes over again under center. While the tumult continues at quarterback for OSU, RB Ezekiel Elliott rolls on with 13 consecutive 100-yard rushing games. Minnesota has lost nine straight games against Ohio State. Its last win came in 2000 in Columbus. This will be the first game between these teams in Columbus since 2009.