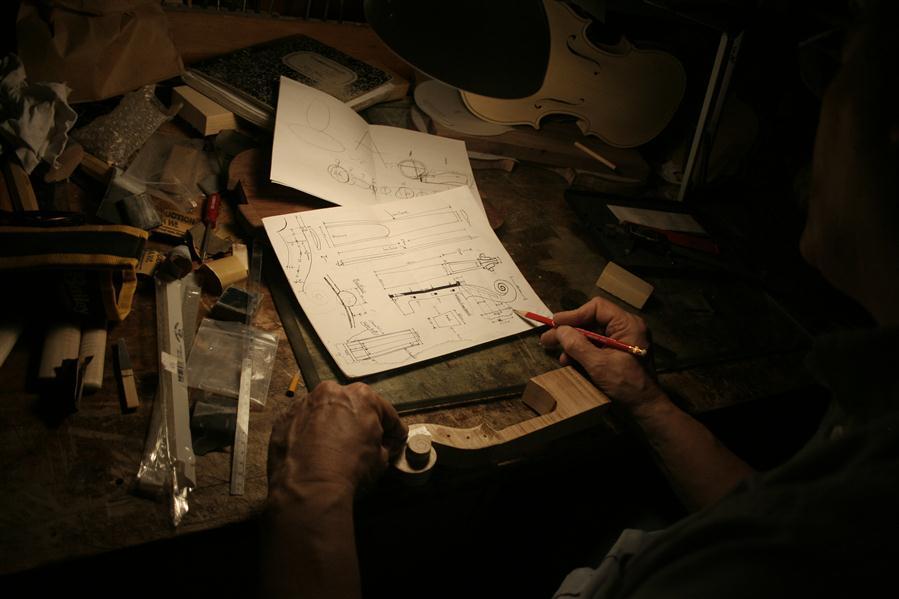 When it comes to violins and other stringed instruments, the artistry isn?t just in the way they?re played. It?s also in how they?re made.

Both of those aspects of the violin captured Thomas Sparks as a boy growing up in northern New Jersey. There was something about the instrument?s sound and shape that immediately appealed to him.

?It?s the king of the string instruments,? he said. ?It?s pretty appealing with the sound and the voice. The way it is able to project is amazing.?

The violin has fascinated Sparks ever since. For nearly 30 years, the visiting lecturer in instrument technology has run the Indiana University Violin Shop, where stringed works of art are created and shipped around the globe.

IU?s two-year program in violin-making, which sits in the Jacobs School of Music, is noted for churning out top-quality instruments - the shop makes violas and cellos, too. And it develops accomplished musicians, one of them being Grammy Award-winning violist Joshua Bell.

Sparks, who also serves as IU?s director of String Instrument Technology, said students who choose careers in the field generally have no problem finding work after graduation.

?What?s [been] important about the program since the mid-1970s is that 95 percent of the graduated students have gotten jobs in the violin-making industry,? Sparks said. ?We have people in L.A., Seattle, Portland, Japan, Korea and Germany, all working in violin shops. They?re really good players also.?

The Violin Shop began some four decades ago, under the direction of late Hungarian-American cellist Janos Starker and the late Belarusian-born Jewish violinist and teacher Josef Gingold.

[btn-post-package]Sparks came to Bloomington as an undergraduate in 1978 and studied under craftsman Ole Steffan Dhal, who passed away in 2004. He said one of his own proudest achievements was making a cello eventually used by Starker, one of the most accomplished cellists in history. He?s ecstatic to pass along the knowledge he?s picked up from working on projects like that to the newest generation taking up the craft at Indiana.

?Any student can get in even if they don?t have woodworking skills,? Sparks said. ?I?ve had students win awards for violin-making after they have left here.?

The violin-making program has an annual enrollment of about 20 students. They start out learning how to make a soundpost - the small dowel inside the instrument that lies under the bridge - from a piece of spruce, rounding it out with a hand plane.

From there, Sparks said the aspiring craftspeople learn how to disable a factory violin, replace the bass bar and glue the instrument back together. After that, they start making forms and patterns for violins and begin the exacting process of carving an instrument. It?s a pretty laborious process: They even make their own varnish from scratch.

But for Sparks and his Violin Shop colleagues, it?s all part of honoring the legacy of an instrument that?s endured for nearly half a millennium.