Volleyball Report: Very little has gone as planned in the Big Ten 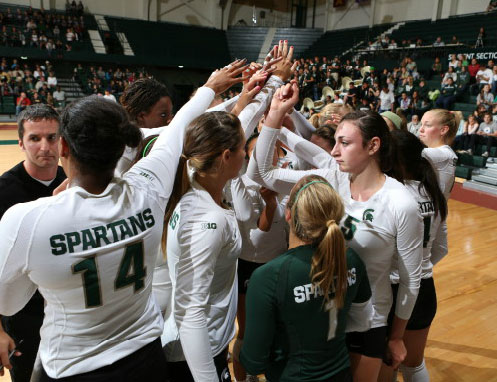 We have reached the midway point of the 2015 season and very little has gone as planned. Look back at the preseason poll released in August and it is nothing like the current standings through ten matches of conference play. The nation?s toughest volleyball conference has always been unpredictable, but now a scrambled Big Ten title race features none of the preseason top four in the No. 1 spot. That position is held by a team that did not even reach the postseason a year ago — Hugh McCutcheon?s 10-1 Golden Gophers.

A season after dropping out of the Top 25 for the first time since 2008 and missing the NCAA tournament for the first time since 1998, Minnesota has owned the Big Ten in the conference?s first half. The Gophers have five wins over ranked conference opponents this year, three of them in the last two weeks with two wins over then No. 15 Wisconsin followed by a win at No. 3 Nebraska, its first in Lincoln since 1980. Minnesota does not lead the league in any individual statistical category, but the Gophers have rattled off nine consecutive wins by finding ways to make the critical plays late in sets to secure victories.

In their last three matches against ranked foes, the Gophers have not been dominant nor had a significant statistical edge. However, at pivotal moments in the match, it has been Minnesota who has made plays. In Lincoln on Friday Oct. 23, McCutcheon?s team handed Nebraska its first home loss of the season by coming through late in sets two and four despite lengthy point runs by the Cornhuskers. All four sets between Minnesota and Nebraska were decided by three points or less, but for majority of the night, it was the Gophers who came through with the key plays.

Wisconsin head coach Kelly Sheffield witnessed a similar result when his team played essentially an even pair of matches with the Gophers statistically but could not come through late in sets. The Badgers fell to Minnesota in five sets at home and then in four sets in Minneapolis in back-to-back matches as a part of the travel partner portion of the schedule.

?I thought right when it was winning time, they made fewer errors than we did in those moments and that was kind of the difference,? Sheffield said.

Hugh McCutcheon places a lot of the credit for these Gophers success on their chemistry, which is improved from a year ago when an inexperienced group was just trying to survive the Big Ten. In 2015, with the conference?s top outside Daly Santana leading the way and two now veteran middles in Hannah and Paige Tapp, as well as one of the league?s top freshmen in setter Samantha Seliger-Swenson, Minnesota looks not only like a Big Ten title contender but one of the top teams in the nation.

The only blemish on the Gophers' 2015 Big Ten campaign is a five set loss at then No. 1 Penn State. Minnesota came back from down 0-2 to force set five but could not complete the comeback, despite four players reaching double figures in kills. Unlike last year when contenders Wisconsin and Penn State met just once, Minnesota will have a second chance to defeat the Nittany Lions in Minneapolis on Nov. 14, a match that could decide the Big Ten title. Factor in that replay is now part of every Minnesota home match and the new Challenge Review System could have its biggest moment in its short existence.

Live on BTN/BTN2GO this weekend:

What direction are these two teams headed in the second half of the Big Ten season? Wisconsin appears to be trending upward despite four losses in conference play. The Badgers are coming off their first win in program history in Lincoln and two tight losses to Minnesota the week prior. Is this the beginning of a long stretch of wins for Wisconsin after playing a considerably more difficult first half of the Big Ten schedule? Saturday?s performance in Lincoln seems to indicate it is possible for Kelly Sheffield?s team.

Purdue bounced back last weekend after two disappointing losses to Ohio State and Penn State after starting the Big Ten season 6-0. The Boilermakers swept Northwestern before earning a five set win over Illinois in the Boiler Box on Sunday. Last year, Purdue lost eight of its final 14 matches of Big Ten play after starting 6-0 and the schedule is daunting over the next week and a half. The Boilers travel to No. 12 Wisconsin and No. 4 Minnesota before welcoming No. 9 Nebraska to West Lafayette. Split this weekend and Purdue should be happy, but drop those three tough matches and ?here we go again? starts to creep into the mind.

If you are one of the top ten teams in this conference, that means you are in contention for an NCAA tournament appearance. That is exactly where Michigan State and Northwestern sit at the midway point. A match like this is not a must-win but for teams currently outside of the Top 25, but any win in the nation?s best conference can go a long way.

Northwestern is trying to show it is not a one hit wonder after beating No. 3 Penn State. The Wildcats have lost three of four since and were swept by Indiana last Saturday night. Consistency is key for Northwestern and a balanced attack run by Taylor Tashima needs to be the norm for the Wildcats to have success in the second half.

Michigan State earned a signature win with it straight set victory over Ohio State but then fell to Penn State in three. The Spartans are second in the Big Ten in kills and have the hitters to contend with any Big Ten opponent. But, much like Northwestern, consistency will be the key in the second half.