Jon Crispin's six keys to Indiana being a serious contender 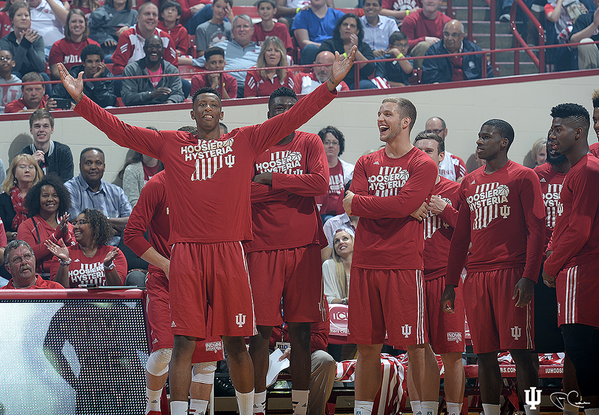 I think @IndianaMBB fans like their floor general. #Yogi pic.twitter.com/z37E50HUYd

As an analyst, I?m often asked to give my keys to the game. This by no means implies that my thoughts are the end-all-be-all and some sort of secret to success. They are simply observations or suggestions I make based on my experience, my knowledge of the team and its personnel and the opponents they?ll face. In my position, I get to spend time with coaches, get to know their strategies and expectations for their team and get an inside look at the players and how they gel.

My job is a lot easier than the demands that are put on the coaching staff. They have their own set of keys for success, their own pressures and they somehow have to get everyone on the same page to ensure that it all comes together. That being said, it?s my responsibility to share my thoughts and observations when I get a good look at a program.

In this case, after spending some time with the Hoosiers at Hoosier Hysteria and assembling my thoughts over a burger at Nick?s in Bloomington, I?ve come up with some keys that I think will make Indiana a serious contender this season.

Tom Crean has a talented and exciting team in Bloomington. The Hoosiers are full of guards who can shoot the 3-pointer, which makes them near and dear to my heart. While their potential is limitless, there will be challenges along the way. Especially as it pertains to specific matchups they?ll face in the Big Ten.

Here are my (general) keys to success for the Hoosiers:

As the only (true) post presence (a GOOD one at that), Bryant gives Coach Crean an inside presence on offense and a paint protecting presence on defense. Keeping Bryant out of foul trouble doesn?t mean he has to play 40 minutes per game. It just means he has to be available when needed. Particularly down the road in crunch time.

If you?re going to play ?small,? you might as well benefit from that versatility and make it a strength. This will also pay dividends as teams will have initial challenges with the 30-second shot clock. Switching around the perimeter often takes away initial options for the offense, which will lead to more bad shots in late-clock situations for opponents.

3. Play with tempo on both sides of the ball

Tempo does not just mean playing fast on offense. Indiana will be more comfortable and capable of playing fast than most of its opponents. Forcing opponents to play at their speed (tempo) will be key for the Hoosiers. More quick shots by opposing teams will allow Indiana to maximize possessions and, in turn, win a lot of games.

The second the Hoosiers get a defensive rebound, they need to be in attack-mode. So much has been made about the 30-second shot clock and how it?s going to be important for teams to ?get into? their offense. I would agree to some extent, but would say it?s more important to be on the attack for 30 seconds rather than push the ball just to run what I like to refer to as ?fake-offense.? Being on the attack at all times will allow the Hoosiers to capitalize on their skills/abilities and create more scoring opportunities.

5. Always have a rim-runner

With so many good 3-point shooters on the floor, there will be layup and dunk opportunities for a big who can run in transition. Defensive guards are the first ones back, and they?ll likely occupy the initial 3-point threats around the perimeter. Opponents will eventually send two or three players back on defense when a shot goes up to avoid giving up easy transition baskets. This will make it easier for Indiana to control the defensive glass. Here, they can turn their offensive strength into a defensive benefit.

6. Score more points than your opponent

It may sound ridiculous, but hang in there with me. The Hoosiers are not built to hold every team under 50 points, and that?s probably why I like them so much. There will be nights when it feels like they can?t get a defensive stop but that shouldn?t worry you too much. This is a team full of offensive firepower and they can outscore anyone they play. If the Hoosiers avoid letting defensive woes affect their offensive performance and aggression, Indiana will win a lot of high-scoring games. For Crean?s crew, it comes down to knowing who you are and being great at what you do.

Whether you?re a Hoosiers fan, a Big Ten fan or a hoops junkie like myself, this is certainly a team you?ll enjoy watching this season.