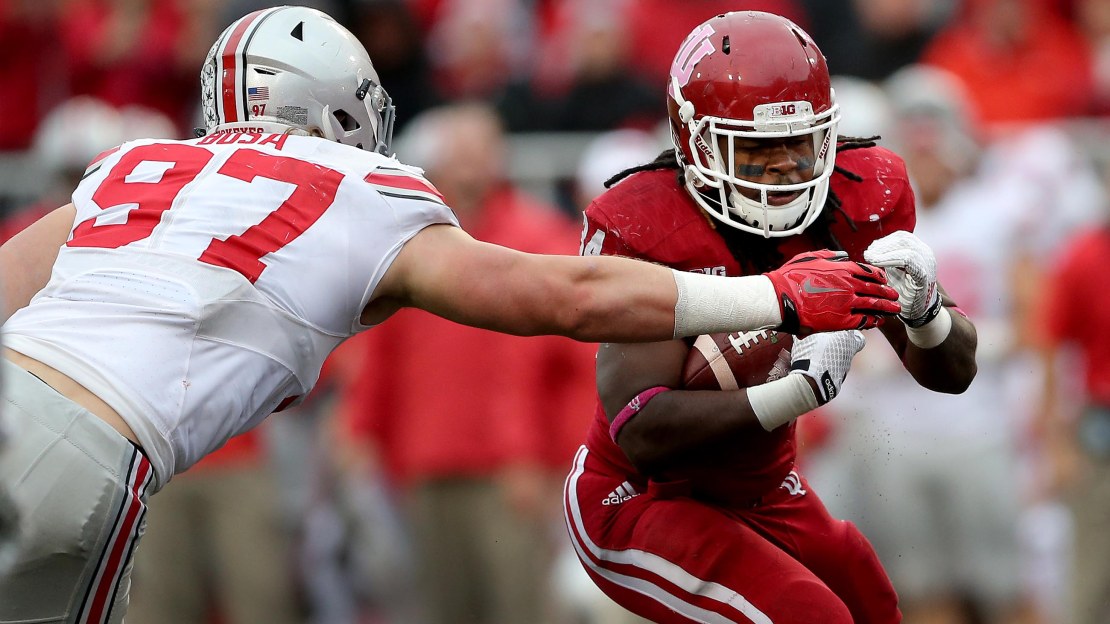 The pursuit of perfection. It?s the goal of every sports team. But few achieve it.

With the season about to hit the home stretch, the Big Ten still has three teams unbeaten: Ohio State and Michigan State are 8-0, battling it out atop the East Division, while Iowa is 7-0 and in control in the West.

The Buckeyes and Spartans are off this Saturday, catching their breath for the final push. Iowa was off last week, jumping back into action vs. Maryland.

Will any member of the ?perfect trio? finish the regular season unbeaten? Maybe. But each is fallible. What are some potential flaws for each of the Big Ten?s unbeatens? Let?s have a look.

The Hawkeyes have been one of the nation?s biggest surprises. Coming off a 7-6 season, Iowa looked to be at a crossroads under Kirk Ferentz. But the Hawkeyes are flying high after some key offseason tweaks, with a move at quarterback being the biggest and boldest. Of the unbeatens in the Big Ten, Iowa looks to have the easiest path. After Maryland?s visit, the Hawkeyes go to Indiana, play home games vs. Minnesota and Purdue before finishing the regular season with what looks like their most challenging tilt: at Nebraska on Black Friday, Nov. 27. But that Nov. 7 game at IU could be scary.

Potential flaws: Iowa already has been hit hard by injury. More could be killer. This is an inexperienced roster in many places at the moment. The offensive line, in particular, has had its depth pushed to the limit. The d-line also has taken some blows, especially the end spot. This is a defense that has to improve at getting off the field on third downs and remains vulnerable to mobile quarterbacks and spread schemes. Another thing: Iowa has a manageable schedule, to the point that its five remaining foes have a combined 2-15 Big Ten record. One could argue that there's a chance Iowa doesn't take one of these teams seriously, possibly resulting in an upset.

This is a golden age for Michigan State, which has won 34 of its last 37 games and 12 in a row. The 8-0 Spartans have done well to battle through myriad injuries, especially along the offensive line, which has had five different lineups. The secondary also has looked like a MASH unit. No wonder MSU has been unable to notch the decisive wins that impress pollsters. After the bye week, the Spartans play a potentially tricky game at Nebraska on Nov. 7, then they go to Maryland before the big trip to Ohio State. Michigan State finishes the year Nov. 28 at home vs. Penn State.

Potential flaws: What is the identity of this offense? Is it a running team or a passing team? MSU has the No. 87 ground game (155 ypg), and the No. 38 pass attack (258.8 ypg). The defense isn?t up to its usual lofty standards, ranking No. 8 in scoring (22.1 ppg) and No. 9 overall (356.5 ypg). And keep an eye on the special teams. The snapper, punter, holder, kicker have all had their dicey moments. A missed extra point ? a blown field goal ? it could be costly in a close game, which this team already has played a lot of. Some think this may be the worst special teams unit of the Mark Dantonio era. Three of MSU's four Big Ten games have come down to the final possession, and the Spartans have trailed in each of the last three games.

The 8-0 Buckeyes are rolling, winners of a national-best 21 games in a row and 28 Big Ten regular-season games in succession. Ohio State should cruise by visiting Minnesota on Nov. 7 and then win a trip to Illinois on Nov. 14. That would set up a monster finish, with Michigan State coming to Columbus followed by a trip to Michigan.

Potential flaws: The offense has been a little sloppy with the ball. Turnovers could be costly vs. a quality foe. The Buckeyes are minus-one in the turnover margin department. Now that it looks like J.T. Barrett is ?the man? at quarterback, will Cardale Jones stay dialed in and be ready for action should something happen to Barrett? Speaking of the QBs, can OSU pass it well enough if an opponent is able to slow a Buckeye rushing attack that is No. 1 in the Big Ten (247.0 ypg)? Admittedly, this is going to be a lot harder to do now that Barrett is the starter. But this offense is very dependent on RB Ezekiel Elliott. What happens if he gets hurt?