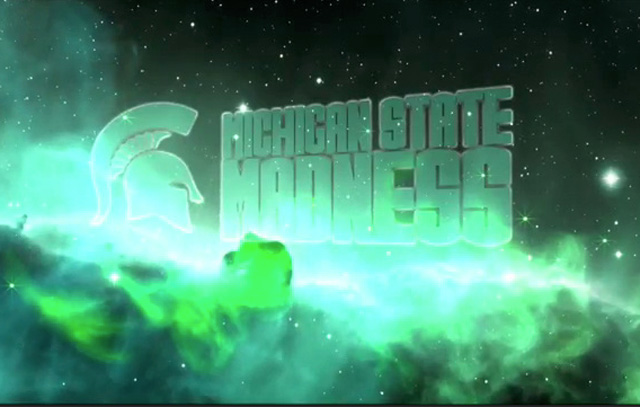 Izzo has made a number of dramatic Midnight Madness entrances over the years. There was KISS, there was Iron Man, there was a jet pilot – watch them all here. But this year, Izzo made quite another Hollywood-themed entrance. Watch it in the video in this post.

Likewise, Merchant entered to a "Sparty's Angels" theme, and after an opening skit with her assistant coaches, Merchant got the crowd going when she made reference to last week's Michigan State football win. As part of the skit, a "Wolverines fan" came running at her with a spray paint can before he was subdued by two young boys – Merchant's "security detail."

The fan's spray paint can was an obvious reference to the recent vandalism of Michigan State's Magic Johnson statue. Merchant then drew some laughs from the Spartans crowd.

"When he came out, did you notice the spray can?" Merchant said. "He was fumbling it."

We do it all again on Saturday night for Indiana's Hoosier Hysteria (subscribe to watch here). Also, exhibition men's basketball season starts next Thursday. Click here to see the full schedule of those games also offered via a BTN Plus subscription on BTN2Go.

Not familiar with BTN Plus? It includes non-televised games and events available on our BTN2Go app with a purchase of a BTN Plus subscription. A subscription to BTN Plus on BTN2Go does not require a Big Ten Network TV subscription with a TV provider. You can just subscribe and watch via the BTN2Go app or BTN2Go.com. More information here, including various subscription plans.

Here are a few more tweets from the event, too.

Posing with fans at #MSUMadness! 15 minutes left to get autographs and posters. #TwitterMirror #GoGreen pic.twitter.com/d47MAV1qmO