What did Tom Dienhart learn about Big Ten in Week 7? Find out here! 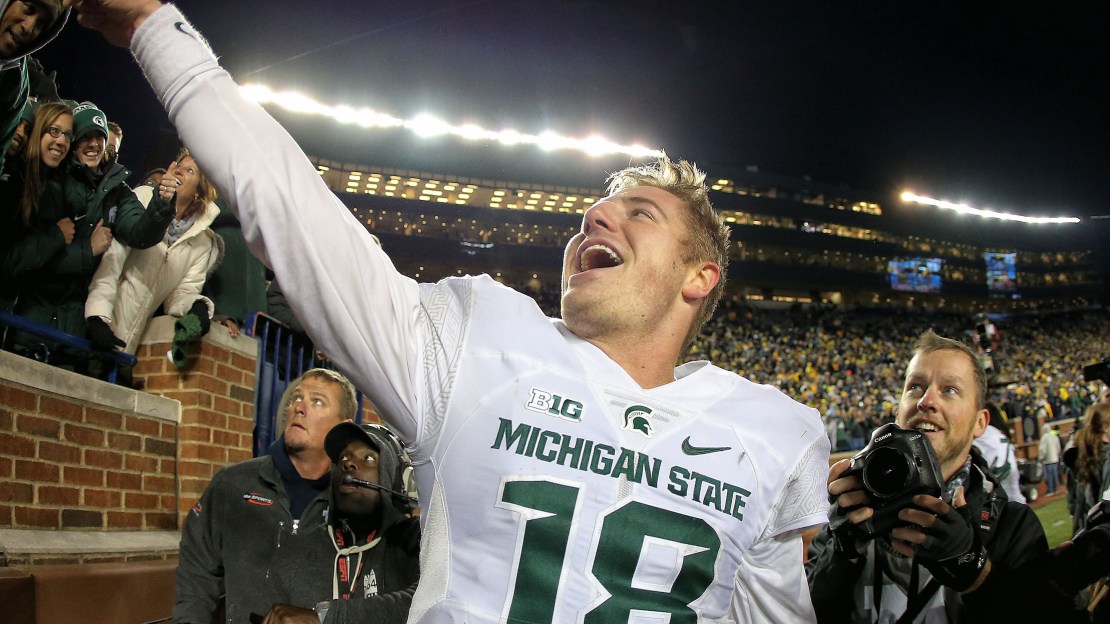 Crazy enough for you? Michigan State stuns Michigan in an ending you?ll never see again, and Rutgers roars back from 25 points down to crush Indiana?s spirit.

What did I learn from those results, and others? Let me slip out of my straightjacket and tell you.

1. Iowa is poised to cruise to its first Big Ten West title. Heck, a 12-0 mark isn?t out of the realm of possibilities. This looked like a dangerous game for the Hawkeyes, who were banged up, but they cruised to a convincing 40-10 win at Northwestern. And RB Jordan Canzeri went down early with an ankle injury. No matter, the Hawkeyes outgained the Wildcats, 492-198, and did most of their damage on the ground with 294 yards rushing to 51. Thanks ? Akrum Wadley? Yes, THANKS, Akrum Wadley!

2. This may be a special season for Michigan State. The Spartans haven?t been overly impressive all season. See the Purdue and Rutgers games, among other tepid results this fall for Mark Dantonio?s bunch. But, they always find a way to win. Saturday?s stupefying result at Michigan takes the cake. The football gods are smiling on Sparty.

3. Michigan now will need help in its quest to win the East. The Wolverines must win out and hope Ohio State beats visiting Michigan State on Nov. 21. Then, Michigan must topple the Buckeyes in the finale on Nov. 28 for the Wolverines to have a chance.

4. September seems like a long time ago for Northwestern. Remember when it beat Stanford? Duke? The Wildcats have seen their 5-0 start melt into a 5-2 reality, as NU has lost at Michigan and to Iowa by a combined 78-10 the last two weeks. A dangerous trip to Nebraska is next followed by a visit from Penn State. The only ?gimme? left on the Wildcats? schedule appears to be a visit from Purdue, as NU also goes to Wisconsin and plays host to Illinois in addition to the aforementioned tilts.

5. Wisconsin's 2015 motto: By any means necessary. This is the most un-Badger like team in generations, as Wisconsin has to go through the air to win with a struggling rushing attack. And, it?s working. QB Joel Stave has thrown for 322 yards each of the last two weeks-and Wisconsin has won them both. This team is just a 10-6 home loss to Iowa from controlling the West.

Not a bad day for #Badgers linebacker T.J. Edwards, who had a career-high 16 tackles, 1.5 TFL and a fumble recovery. http://t.co/TKZwGrGDpZ

6. Indiana's bowl hopes are no longer a sure thing. When the Hoosiers jetted to a 4-0 start, bowl eligibility for the first time since 2007 seemed like forgone conclusion. Not so fast. The Hoosiers have lost three in a row, falling to Ohio State, at Penn State and vs. Rutgers, arguably the most painful after blowing a 25-point second-half lead. IU needs to win two of its last five to punch its bowl ticket: at MSU; Iowa; Michigan; at Maryland; at Purdue. You thinking what I?m thinking? You know, that the Hoosier bowl hopes may come down to the Old Oaken Bucket game in West Lafayette vs. a Purdue team that may be 1-10?

You have a cool name like Simmie Cobbs Jr., you make catches like this. Brought to you by @GrubHub. #BTNStandout http://t.co/Xg7VVFzZ2X

7. Rutgers may have bowl hopes, after all. A loss at Bloomington would have been killer. But the Scarlet Knights scored the final 28 points in a "flag football game" to rally for a thrilling 55-52 win to move to 3-3. Still, getting a sixth win may be difficult with games left vs. Ohio State; at Wisconsin; at Michigan; Nebraska; at Army; Maryland. Too bad RU lost that heart-breaker to Washington State on Sept. 12.

8. Nebraska has life! After suffering four excruciating losses on the opponents? final offensive play, the Cornhuskers had an easy time of it in a 48-25 victory at Minnesota. Yes, the pass defense still has work to do. But the NU offense looks like it?s back on track.

9. Ohio State may have its starting quarterback, and it's J.T. Barrett. The 2014 Big Ten Offensive Player of the Year was fantastic in Ohio State's 38-10 victory over Penn State. Barrett played finisher in the victory – Ohio State's 20th straight win – completing all four passes for 30 yards and a pair of touchdowns, to go along with 102 yards and two more scores on the ground. We have to see more of Barrett the rest of the way, right?

10. Better days are ahead at Penn State. The Nittany Lions had won five straight entering Saturday night's humbling 38-10 loss at No. 1 Ohio State. But, with the schedule that awaits, they should win their next three games: Maryland; Illinois; at Northwestern. That would be eight wins before their brutal finish that includes vs. Michigan and at Michigan State. Not bad for a rebuilding program. This basically is a team that will beat who it should beat-and lose to who it should lose to.