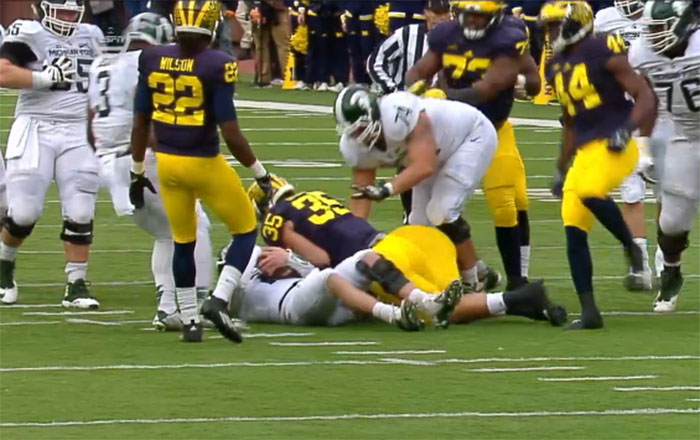 Midway through the second quarter, MSU quarterback Connor Cook took a draw and slid down to avoid contact. Michigan linebacker Desmond Morgan went in to make the stop, while Bolden followed.

Bolden was flagged on the play and ejected for targeting, a ruling that didn't sit well with Michigan fans.

"I do not think that's anything malicious or anything like that," ESPN analyst Chris Spielman said during the telecast. "It's momentum and you have a big guy like Conklin, who is strong and tough, giving you a shove toward (him)."

Check out the full video at the top of this post.

Following the ejection, Bolden went on to slap hands with the Michigan fans and pump his fists as he exited the field.

This marks the second consecutive season Bolden has made headlines in the heated rivalry, as it was the linebacker who drove the stake into the field last season during warmups at Spartan Stadium.