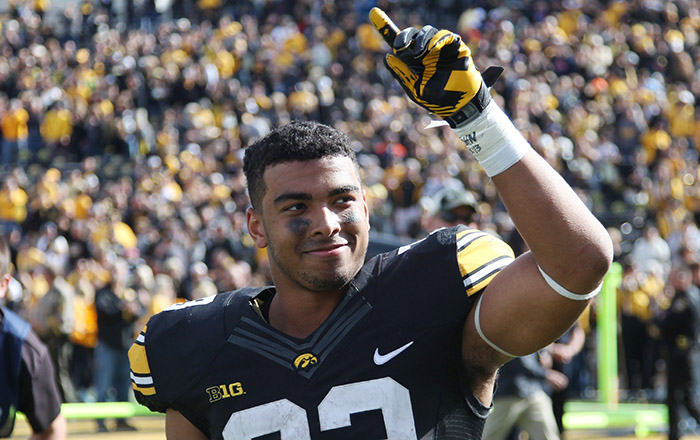 Another Saturday, another heart-breaking loss for Nebraska … and another dominating effort by Michigan. This time, Northwestern felt the wrath of Jim Harbaugh?s Sharpie and khakis. Next up: A visit from Michigan State, which survived and advanced at Rutgers. Oh, and don?t forget about No. 1 Ohio State, which may have turned a corner offensively.

Get my Week 6 Big Ten roundup below.

Biggest surprise: It has to be the relative ease with which Michigan dispatched Northwestern. The 38-0 win over the previously unbeaten Wildcats was dominating. NU was yielding a national-low 7.0 points per game. Michigan had that 13 seconds into the game and was off and running in notching its third shutout in a row. During its five-game winning streak, the Wolverines have outscored foes 160-14.

Biggest disappointment: It was a shock to see 5-0 Northwestern lose that badly. But, let?s go with Purdue falling at home to Minnesota, 41-13. This was a banged-up Gophers squad that had the second-lowest scoring attack in the nation and was coming off a shutout at Northwestern. But Minnesota manhandled Purdue, which looked good in a 24-21 loss at Michigan State last week. The Boilers haven?t won a Big Ten home game since 2012. Darrell Hazell is 5-25 (three wins are vs. FCS foes) at Purdue, 1-17 in the Big Ten. Will this team win another game?

Play this again: The Wisconsin and Nebraska game had good theatre. After a scoreless opening quarter, Nebraska took a 14-7 halftime edge. The Huskers still led, 14-10, through three quarters. The Badgers took a 17-14 lead in the fourth quarter before the Huskers used a long TD run to get back on top, 21-20. Wisconsin pulled it out with a 46-yard field goal with four seconds left to take a 23-21 decision. It marked the first time Wisconsin won a game with more pass attempts that rush attempts since the 2007 Outback Bowl. The Badgers are 4-1 vs. Nebraska since the Huskers joined the Big Ten.

Never play this again: Minnesota 41, Purdue 13. The game was close at halftime, with the Gophers leading 10-6. But Minnesota blew it open from there with 28 third-quarter points en route to scoring 41 unanswered points until a meaningless TD by the Boilermakers at the end.

Best play: There were some sweet plays-how about Jehu Chesson's 96-yard kickoff return for a TD to open the game vs. Northwestern?-but let?s go with Braxton Miller?s highlight-reel diving catch vs. Maryland, which he followed up with a scoring grab. The quarterback-turned-receiver also made this glorious ankle-breaking move. We never can get enough Braxton highlights.

The pictures of the catch are pretty great, too.

Most underrated play: On a late 3rd-and-9, Connor Cook delivered a pretty pass to R.J. Shelton, who made a terrific grab to help set up Michigan State's eventual go-ahead touchdown.

The throw! The catch! What an all-around @MSU_Football highlight. http://t.co/ZCILsEt41c

Did you see this? With a chance to possibly send the game to overtime, Rutgers QB Chris Laviano, unaware of the down, spiked the ball on fourth down. The confusion came after a Michigan State sack, and it all resulted in No. 4 Michigan State holding on for the 31-24 victory.

Michigan. This program is going through the roof. That?s three shutouts in a row for the Wolverines, who dismantled unbeaten Northwestern, 38-0. The last time Michigan had three shutouts in a row was 1980. The Wolverines scored TDs on a kickoff return, interception and offense for the first time since 1991 at Boston College. Next week, 6-0 Michigan State visits Ann Arbor in what should be a Titanic matchup.

Iowa. The Hawkeyes rolled on to 6-0 after a strong 29-20 win vs. Illinois. The defense continues to play well, while the offense has run-pass balance. Next week?s trip to Northwestern will be telling in a battle of arguably the two best teams in the Big Ten West. Know this: Iowa lost star DE Drew Ott to a torn ACL.

Penn State. It hasn?t always been pretty or impressive. But, the Nittany Lions have now won five in a row after that ugly season-opening loss at Temple. Penn State will get a dose of reality next week when it plays at Ohio State after taking on Buffalo, Rutgers, San Diego State, Army and Indiana.

Wisconsin. The Badgers remained in the hunt for the West crown with a clutch 23-21 win at Nebraska. Rafael Gaglianone hit a 46-yard field goal to win the game with four seconds left. He earlier missed from 39 yards just over a minute earlier. Wisconsin can thank Joel Stave and the passing game for this victory.

Indiana. After that 4-0 start, the Hoosiers have now lost two in a row following a 29-7 defeat at Penn State. It hurt Indiana that neither QB Nate Sudfeld nor RB Jordan Howard was able to play because of injury. As a result, IU had just 234 yards of offense. Next week?s home game vs. Rutgers is huge.

Northwestern. So much for that 5-0 start. The Wildcats were smacked in the face on their trip to Michigan, which ran back the opening kickoff 96 yards for a TD and never looked back. NU was averaging a Big Ten-best 248.8 yards on the ground and was held to 38 at Michigan.

Nebraska. The misery continues, as the Cornhuskers dropped another heart-breaker after Wisconsin nailed a 46-yard field goal with four second left to take a 23-21 victory in Lincoln. All four of Nebraska's losses have come on its opponent's final offensive play. And the four defeats have been by a combined 11 points.

Purdue. A 41-13 home loss to a banged-up Minnesota team that was missing 11 players from its two-deep and that had the second-lowest scoring offense in the nation may be rock bottom for this program. This looked like a winnable game for the Boilermakers-and probably was a must-win if they wanted any shot at a bowl. Oh, and star LB Ja?Whaun Bentley may be out the rest of the season with a knee injury suffered earlier this week. Now what?

Iowa RB Jordan Canzeri carried a school single-game record 43 carries for 256 yards and a TD in a 29-20 win vs. Illinois. He also added a score in the passing game.

Iowa LB Josey Jewell racked up a team-high 12 tackles and recovered a fumble in a win vs. Illinois.

Penn State QB Christian Hackenberg hit 21-of-39 passes for 262 yards with two touchdowns in a 29-7 win vs. Indiana. He also added a pair of rushing scores.

Penn State DE Carl Nassib had two sacks, giving him at least one in every game this season, and two forced fumbles in a victory vs. IU.

Michigan defense, as a whole, for carding three consecutive shutouts for the first time since 1980. One of the biggest stars was Jourdan Lewis, who recorded four tackles, including one for a loss, and returned an interception 37 yards for a touchdown.

Michigan WR/KR Jehu Chesson set the tone by returning the opening kick 96 yards for a touchdown, and the Wolverines never looked back.

All of the talk was about defense. Looks like special teams will be big, too! Brought to you by @GrubHub http://t.co/WOgX1JAUhk

Illinois WR Geronimo Allison made eight catches for 148 yards with a TD at Iowa in a 29-20 loss.

Minnesota DB Jalen Myrick picked off two passes and returned one to the house in an easy win at Purdue.

Wisconsin QB Joel Stave hit 25-of-50 passes for 322 yards and a TD in a clutch 23-21 win at Nebraska. The other three times a Badger QB has attempted 50 passes, the team has lost.

Rutgers WR Leonte Carroo came back from two-game suspension to catch seven passes for 134 yards and three TDs in a 31-24 loss to MSU.

Michigan State QB Connor Cook completed 23-of-38 passes for 357 yards with two touchdowns and a pick in a 31-24 win at Rutgers.

5, wins in a row-all at home–for Penn State after its opening loss at Temple.

43, carries for Jordan Canzeri, which set an Iowa single-game record

7-0, Iowa's record with C.J. Beathard as the starting quarterback, dating back to last season

15.4, Minnesota?s scoring average entering today, which ranked second-to-last in the nation. The Gophers scored 41 in a win at Purdue.

106, yards rushing for Ohio State?s Ezekiel Elliott on 21 carries with two touchdowns. It was the 11th game in a row that Elliott ran for over 100 yards.

"I thought what he did was really special." – Iowa coach Kirk Ferentz, on Jordan Canzeri's school-record 43-carry day

"Biting your nails, that was crazy. So unbelievable. I'm thankful for my teammates giving me that second chance." – Wisconsin K Rafael Gaglianone, on hitting game-winning field goal

"I'd have to look back a ways, but I don't think I've really seen this before." – Nebraska coach Mike Riley, on the team's fourth loss on the opponent's final offensive play

"We've got to stick in this together. We said from day one that you've got to expect the unexpected, and we really didn't think that we would have a season like this." – Nebraska QB Tommy Armstrong, on another late loss

"Shannon Brooks is going to be a heck of a back. He reminds me of Marion Barber." – Minnesota coach Jerry Kill

"We're Michigan State and we are No. 4 in the country. That doesn't mean anything but every team is going to give us their best shot. A win is a win. They all count." – Michigan State WR Aaron Burbridge, on team's second consecutive narrow victory

"At the end of the game, the clock management is 100 percent on the guy in charge and I'm the guy in charge." Rutgers interim coach Norries Wilson, on team spiking ball on 4th down in final seconds