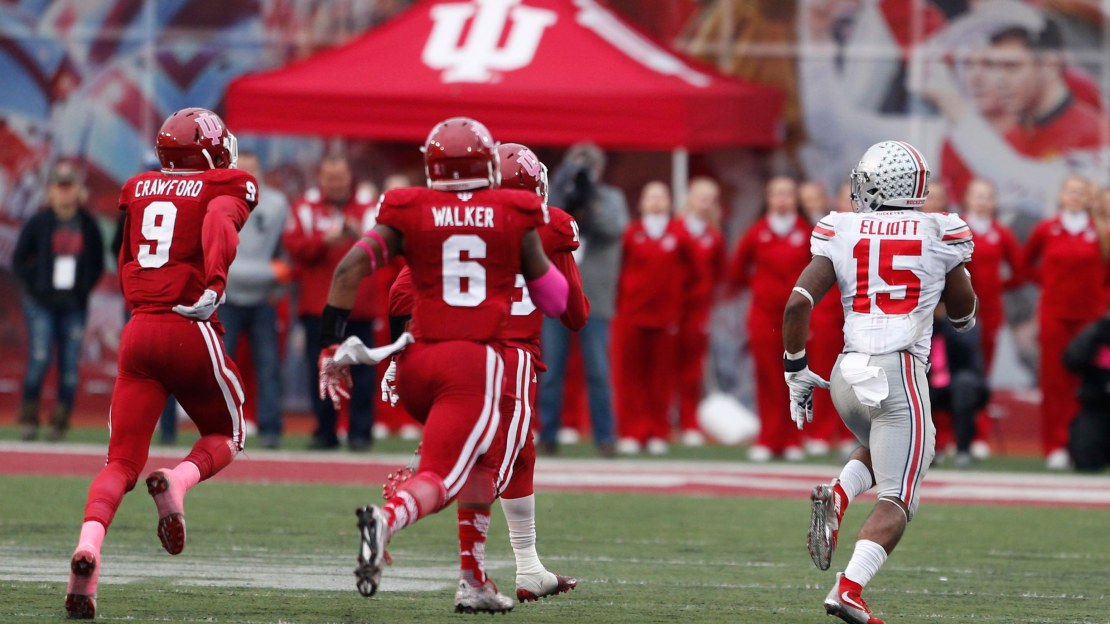 For those of you like me who love watching close games that go down to the wire, the first week of Big Ten football was a dream come true.  Four of six matchups in the conference were decided by seven points or less while Penn State slipped past Army by six points in the one non-conference game.

And for those who prefer a dominating defensive performance, two matchups did not disappoint.  Northwestern picked up their first shutout in almost two decades with a 27-0 win over Minnesota while Michigan went a second consecutive week without allowing a point, blanking Maryland on the road by a 28-0 score.

With some of the more highly anticipated matchups in the conference, here are five facts you should know when you tune in to this weekend?s games on BTN.

1. Ohio State junior running back Ezekiel Elliott continues to run his way into the record book. The reigning Big Ten Offensive Player of the Week carried the Buckeyes to a victory last weekend over previously undefeated Indiana by rushing for a career-high 274 yards off 23 carries. He posted a school record 243 rushing yards in the second-half alone.  That total second-half rushing total included touchdown runs of 55-, 65- and 75-yards. With his overall performance, Elliott also set a new program single-game record by averaging 11.9 yards per carry. The Buckeye running back is currently averaging 7.1 yards per carry for his career, the highest mark among all active NCAA (D-I through D-III) football players with a minimum of 400 rushing attempts.

2. Michigan?s defense has made it nearly impossible for opposing team?s to keep their offense on the field. The Wolverines have allowed their opponents to successfully convert just 19.4 percent (14-of-72) of their third-down opportunities, the lowest mark among all FBS teams. Their 14 third-down conversions allowed are currently tied for the second-fewest in the nation behind Clemson (-13).  Since the start of the 1996 season, no Big Ten team has led the nation in opponent third-down percentage: (Michigan State in 2013 and Ohio State in 1998 both finished second). Last weekend, Michigan?s defense forced twelve three-and-outs, holding the Maryland offense to 1-of-18 on third-down opportunities.

3. A 5-0 start has put Northwestern quarterback Clayton Thorson in select company. Currently the only freshman quarterback with five wins this season, he is just the fifth power conference freshman to begin his initial campaign 5-0 since 2011, joining Oregon?s Marcus Mariota (2012), Texas Tech?s Baker Mayfield (2013), Florida State?s Jameis Winston (2013), and Arizona?s Anu Solomon (2014). Of those four players, Heisman Trophy winners Mariota and Winston were the only ones to improve to 6-0. Of course, Northwestern has a tough task ahead with a matchup against Michigan. Still, a win on Saturday would give the Wildcats their first 6-0 start since the Kennedy Administration (1962).

4. Have the Spartans lost some of their scoring power? Michigan State has won 18 of its last 19 games overall in Big Ten play. However, last weekend?s 24-21 victory over Purdue marked just the second time in those previous 18 conference wins that the Spartans failed to prevail by double-digits. It also snapped the Spartans? school record of twelve consecutive games overall in which they scored at least 30 points. Never fear though MSU fans, Sparty has still managed to score at least 24 points in each of their last 20 consecutive games overall, which is currently tied with Baylor for the longest active streak in the FBS. Can they keep that streak intact this weekend at Rutgers?

5. Maryland?s offense has struggled as whole in their last two games against West Virginia and Michigan. They only had 326 yards against the Mountaineers and followed that up by only having 105 yards against the Wolverines, which was the fewest amount of yards they?ve had in a game since recording just 91 against North Carolina State in 2004. In fact, last weekend?s shutout loss to Michigan marked the first time that the Terps had been blanked at Byrd Stadium since 1997.  It doesn?t help that Maryland has been committing a lot of turnovers – a league-high 17 to be exact. Quarterback Caleb Rowe has thrown twelve interceptions this season.  That?s more picks than 128 of 129 FBS teams have thrown all season.