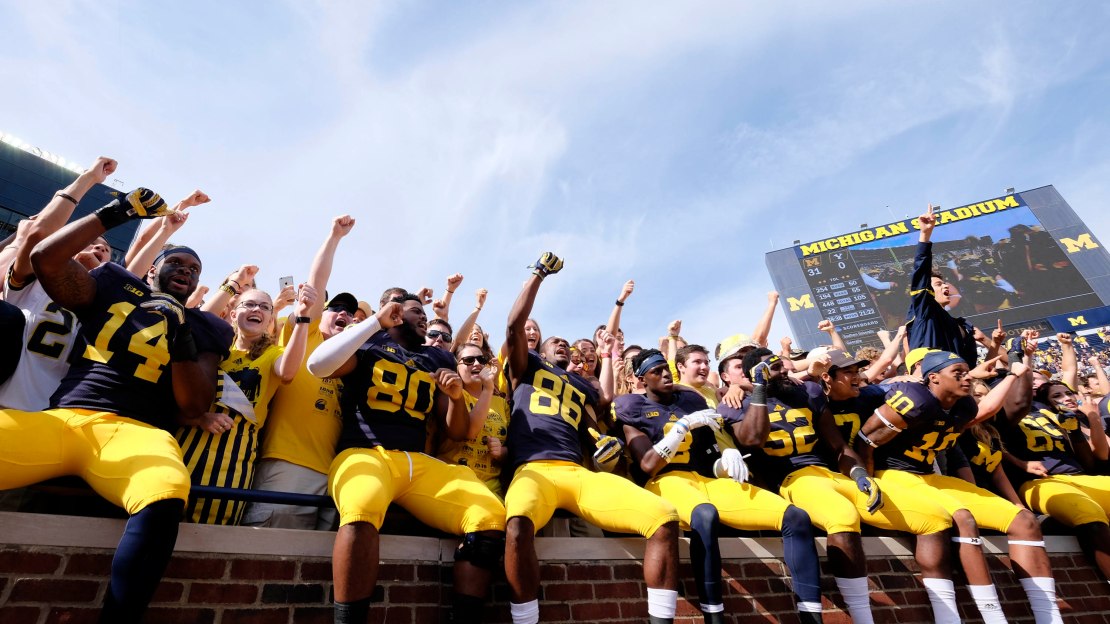 The great Pat Forde has his Forde-Yard Dash out. And, in it, he predicts when each of the remaining unbeaten will taste defeat.

In case you forgot, the Big Ten has four unbeatens. The first loss for each:

You notice what I noticed? You know, that the Wolverines are slated to dole out three ?first losses??

Sporting News had some fun with a slide show that identified what it felt have been the worst loss for each Big Ten team over the last 25 years.

So many obvious choices here. But, also some curious ones. There is a difference between ?worst? loss and ?bad? loss. I would have made some different choices for some of the teams. But, I won?t argue with Michigan?s worst loss. You know what I?m talking about: Appalachian State. It still has to sting to this day.

Zach Osterman of IndyStar.com says Indiana?s trip to Penn State will be a test of the team?s maturity and improvement. And, he?s correct. I think this is the type of game the Hoosiers need to win if they truly are evolving as a program.

?One of our biggest things that I think has changed this program is, we look at every day as a big opportunity to do something,? senior tight end Anthony Corsaro said. ?That?s coach Wilson?s biggest thing to us every day: You?ve got to do something every day. It?s not just about Ohio State. It?s not just about whoever you circle on the schedule. It?s about every day, that?s an opportunity to get better and keep coming and fight.

?That?s what we?re really trying to focus on. This week?s not like any other week. It?s just the next week.We?ll bring that attitude.?

Have you figured out the Penn State offense yet? I haven?t. And, we may never in 2015.

The great Bob Flounders of Pennlive.com wondered how many times the Lions' have scored more than two touchdowns in any of the nine conference games the program has played under James Franklin. The answer is difficult to comprehend. The answer is one. PSU probably is gonna have to do better than that to beat Indiana.

This is interesting: Doug Lesmerieses of Cleveland.com says Urban Meyer willingly gave up the quarterback run game when he tabbed Cardale Jones.

Doesn?t make much sense, does it? Not to me. Why take away that threat? J.T. Barrett ran for 938 yards last year. Defending him is tough for defenses. And how do you think the Buckeye attack would be functioning if Braxton Miller was still taking snap? I bet it would be doing better than it is now. Just sayin?.

From the files of ?get a grip.? A 15-year-old Iowa fan got socked in the kisser after the Hawkeye-Badger game last week.

After that loss at home to Iowa, Wisconsin safety Michael Caputo says the Badgers need to win out in this video. I?m not gonna argue with Caputo. Since the Big Ten went to divisions, only one division champ has had two Big Ten losses.

Just winning the next one will be tough for Wisconsin, which plays a desperate Nebraska team on the road. A second Big Ten loss may doom the Badgers? hope of winning the division.

The wound from last week?s excruciating loss at Illinois is still fresh for Nebraska. And, it should be. It was painful ? but the Cornhuskers can?t let it define their season. Husker captain Jack Gangwish says they ?are with this staff.?

But what to make of OT Alex Lewis? As the Huskers were leaving the field following the loss, Lewis was seen by multiple media members blowing kisses to NU fans who had made the trip to Champaign, Illinois, for the game and half-heartedly yelling, "I'm sorry we suck!" with a grin. Some fans want Lewis to be stripped of his captaincy.

In this day and age, it is truly stunning to think the down count at a major college football could get messed up. But, it did in the Nebraska at Illinois game.

The Big Ten officials? organization says a third-quarter officiating mistake cost Illinois a down in its 14-13 win Saturday over Nebraska. Collegiate Officiating Consortium Coordinator of Officials Bill Carollo said earlier this week that replay officials should have given Illinois another down when they reviewed a situation in which field officials lost track of the down and distance. Instead the play that Illinois thought was third down was judged to be fourth down. Illinois had to turn over the ball at its own 44-yard line. I?ll just say this: Good thing the Illini won.

Michigan State has had real issues scoring in the second half.

Graham Couch of the Lansing State Journal notes that MSU is averaging 4.8 points in the third quarter, 10 points total in the second half, while allowing 6.2 and 14.6 points, respectively. Never before in Mark Dantonio?s tenure has the third-quarter margin been a negative. And, until now, only in 2009 have the Spartans allowed more points than they?ve scored in the second half of games.