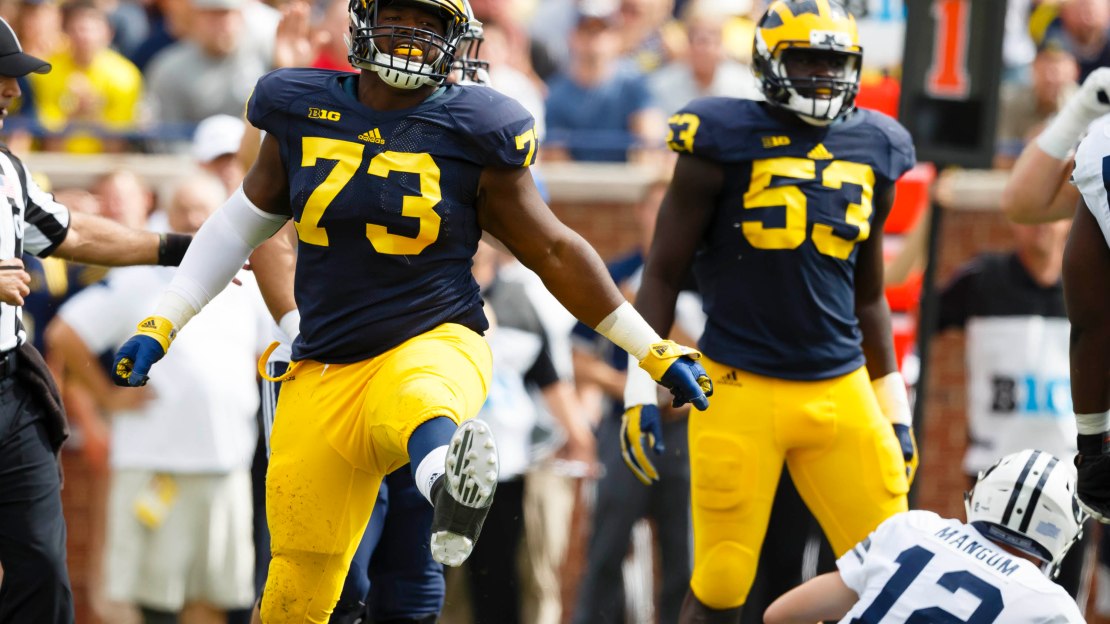 With non-conference play in the books for 12 of 14 teams, it?s finally time to test each other and figure out who is the best in the Big Ten this season. These are the real games where every win and loss will determine who will be making that trip to Indianapolis in December, and that first step begins this weekend.

There are three important Big Ten matchups coming up this weekend on BTN.  Kicking off a noon ET, No. 22 Michigan makes their first trip to Byrd Stadium to face Maryland, while Minnesota travels to Evanston to clash with No. 16 Northwestern.  Then at 4 p.m., Nebraska plays at Illinois.

Use our TV GameFinder lookup tool to find BTN games on your TV.

With a lot a stake in the opening week of conference play, here are five facts you should know when you tune in to this weekend?s games on BTN.

1. Michigan?s defense has been the biggest factor in why the Wolverines are back in the AP Top 25 for the first time since Oct. 27, 2013.  The Wolverines have allowed only 38 points in its first four games of the Jim Harbaugh era, the fewest allowed by the Wolverines through a coach?s first four games since Bennie G. Oosterbaan in 1948.  Last weekend?s 31-0 shutout victory by Michigan over formerly #22-ranked BYU was the largest by an unranked Big Ten team over an AP-ranked opponent in non-conference play in any of the last 20 seasons.  BYU, who came into that contest with the Wolverines averaging 432.2 yards per game of offense, managed only 105 total yards.  That was the fewest yards allowed by a Michigan defense in any game since they held Notre Dame to just 79 yards on Sep. 15, 2007.  Michigan is now looking to hold an opponent to seven or fewer points in four straight games for the first time since back when Harbaugh was their starting QB: (September 21-October 12, 1985.)

2. After just four games, Northwestern is only one win away from matching their win total in each of the last two seasons.  Entering the opening weekend of conference play, the Wildcats are one of only five remaining unbeaten Big Ten teams, which is the most for the league since 2010.  It?s also the fifth time under head coach Pat Fitzgerald that Northwestern has started the season 4-0.  That occurred just five times over the previous 65 seasons before Fitzgerald took over the reigns of the program: (1950, 1951, 1958, 1959, 1962).  Perhaps the Wildcats? success thus far in 2015 has been attributable to the resurgence of their run game, as they currently are averaging a league-high 265.0 yards per game on the ground.  That?s 128.4 more rushing yards per game than they averaged in 2014, the third-largest increase of any FBS team from last season to this season.

3. Minnesota has had a hard time scoring points, especially against teams who haven?t been great defensively.  Although they posted a season-high 27 points in their win against Ohio last weekend, it marked the eighth consecutive game dating back to last season that the Gophers have been held to 28 points or fewer.  Perhaps it can be attributed to the offense?s ability to get things moving?  Well, Minnesota has gone three-and-out on 32.7% (18/55) of their offensive possessions this season, which is the highest mark among all ?power conference? teams.  And even when they do get the offense in position to score, they haven?t been able to cash in consistently.  The Gophers have scored on just 8-of-12 appearances inside the red zone this season, which is currently tied for the ninth-worst mark in the nation.  Only four of those scores have been touchdowns.

4. Nebraska?s offense and defense have been on opposite ends of the spectrum this season.  The Huskers have already recorded 92 offensive plays of 10-yards-or-more, which are the second-most of any team in the nation: (Cincinnati - 95).  A majority of those plays have been attributed to redshirt junior quarterback Tommy Armstrong, who currently leads the Big Ten in total offense at 346.0 yards per game, which was the tenth-best mark in the nation coming into this week.  Meanwhile, Nebraska?s defense has had a lot of issues so far this season.  No team has allowed more passing yards (1,518), pass plays of 10-plus yards (57) and pass plays of 20-plus yards (24) nationally than the Huskers.  And of course, the turnover bug does still bite Nebraska from time to time.  They have turned the ball over at least once in each of the last ten games; and in eight of those games they have turned it over multiple times.

5. Which Maryland team shows up to play this weekend? In Week 1, the Terps scored 50 points in a win over Richmond.  In Week 2, they allowed 42 second-half points in a 21-point loss to Bowling Green. They bounced back with an 18-point win over South Florida, only to follow that up with a 39-point loss at West Virginia.  The only thing that has been consistent for Maryland has been their ability to commit turnovers. So far, the Terps have been responsible for 14 giveaways, which is tied for the second-most nationally.  It?s also four more than any other team in the Big Ten. Quarterback Caleb Rowe has thrown a league-high nine interceptions in just 64 pass attempts.