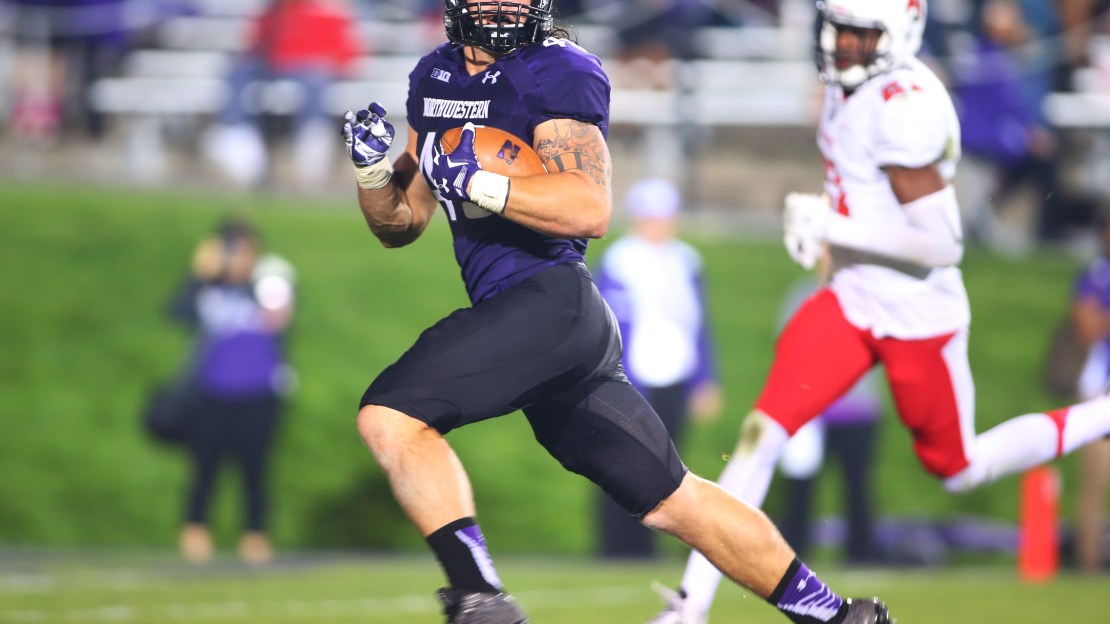 The great Lee Barfknect of Omaha.com nails it in this piece when he says the Big Ten West race is a pick ?em-but it soon may settle.

This week alone should bring some clarity, with Iowa at Wisconsin and Minnesota at Northwestern.

No. 1 Ohio State comes to 4-0 Indiana this Saturday for one of the biggest games in Bloomington in years. And I mean ? years! It?s an honest-to-goodness big game in Bloomington. Could the Hoosiers maybe ?

Kyle Austin of Mlive.com takes a look at some key numbers for Michigan State. And his work reveals that the Spartans continue to be hurt by big plays. Hard to believe, huh?

Through four games, the Spartans have given up 70 plays of 10 yards or more, according to cfbstats.com. That's the second-most in the Big Ten, behind only Maryland, and fourth-most among power five teams.

Michigan RB De?Veon Smith hurt his right foot vs. BYU on Saturday. Will Smith play this week at Maryland? Jim Harbaugh didn?t shed much light on the subject on Monday.

Smith has emerged as the team?s top back, but Michigan has capable replacements in Ty Isaac and Drake Johnson. In fact, I would rest Smith vs. the Terps and save him for the Northwestern game the next week.

Doug Lesmerises of Cleveland.com gets it. He knows Ohio State?s toughest game could be that season-ending trip to Michigan.

Why? The visit from Michigan State the week before OSU?s trip to Ann Arbor could leave the Buckeyes a bit beat-up. For the last two weeks, the Buckeyes likely will have the toughest schedule in America. MSU may still be ranked No. 2 with it comes to Columbus. And what could Michigan be ranked by Nov. 28?

The great Dan Duggan of NJ.com has 5 things to know about Rutgers as Week 5 dawns. Chief among his topics: Where are the downfield passes?

This is difficult to believe, but Chris Laviano hasn?t attempted a downfield pass for three games in a row. Interim head coach Norries Wilson said last week that he believes Laviano's arm is strong enough to make all the throws. Duggan says it's unclear why Laviano has been hesitant to uncork a deep pass, as he had open receivers downfield numerous times on Saturday. Often, Laviano tucked the ball on rollouts rather than taking a chance with a throw downfield. Bottom line: This attack needs to open up and stretch defenses.

Rick Brown of HawkCentral.com says the stakes are increasing for C.J. Beathard and the Hawkeyes. No doubt. This week?s trip to Wisconsin will tell us a ton about Iowa, which will face a rugged Badger defense.

?We need to elevate our play to another level,? center Austin Blythe said in the understatement of the year. ?We?ve been playing well these first four games, but we?ve made a lot of mistakes. We have to learn from those to be able to compete in this conference.?

By the way: Iowa is averaging 37.8 points. Wisconsin is allowing 9.5 points. What will give?

Michael Odom of InsideNU.com wants the real Northwestern to stand up. He thinks NU looked like a championship contender for 15 of 60 minutes vs. Ball State.

Odom says two different NU teams took the field Saturday. And thus, there are a couple of ways to look at Saturday's game. The optimistic observer would say that a very good football played its worst game of the year and still won. The skeptic, on the other hand, would say that a slightly overrated (and now injury-ridden) team squeaked by a sub-par opponent. Both views are valid. But the argument for the former is compelling, and here's why: It appears Clayton Thorson is actually improving.

After falling to 1-3, Purdue is looking for answers. Searching for them vs. No. 2 Michigan State in East Lansing isn?t ideal.

Linebacker Ja?Whaun Bentley, when asked about team morale after the latest disappointment, Saturday?s 35-28 loss to Bowling Green that could have been, just like with Marshall, a program-changing victory, insisted all is not lost.

?We have a good locker room,? Bentley said. ?We have good leaders. We recognize we?re not mentally out of it. We?re having little execution problems. We have little lapses in coverages and things like that. We have to correct those. These are definitely correctable issues. There?s nothing eye opening. There?s nothing we can?t control or change.?

Finding a win in October will be tough for Purdue. Check out the slate: at Michigan State; Minnesota; at Wisconsin; Nebraska. So, don?t be shocked if the Boilers are 1-7 as November dawns.