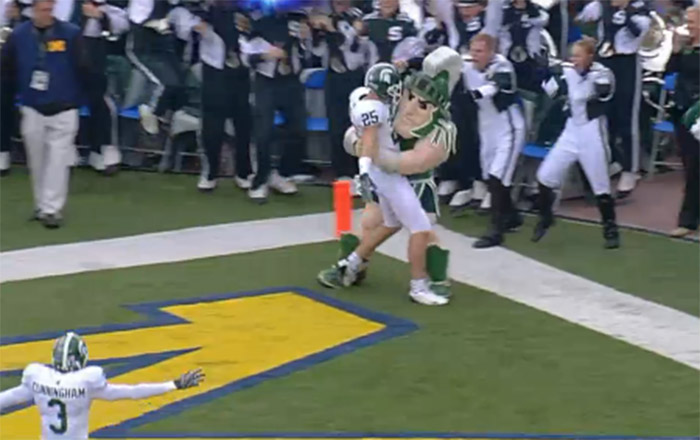 Everyone can enjoy a walk-on who defies odds and turns into a star, right?

If so, few Big Ten football fans need an introduction to former Michigan State receiver Blair White. After all, White went from a walk-on in 2007 to an All-Big Ten first-teamer in 2009, when he tied for the Big Ten lead in touchdown receptions (9).

White, a first-team Academic All-American, to boot, went on to play parts of two seasons (2010 & 2011) in the NFL with the Indianapolis Colts, amassing 36 receptions for 355 yards and five touchdowns in 20 games, before injuries forced him to enter a career in dentistry earlier than expected.

Read my email Q&A with White below:

BTN.com: Let?s start here: How often do you think about trading in the dental coat for a helmet and shoulder pads?
Blair White: Honestly, quite a bit. Not necessarily that I would want to go back, but it was a shame that injuries were the culprit to the end of my career. I feel that I could still perform at a high level, if only I could trade my back in. In all seriousness, those animals hit just too darn hard for me. It's amazing when you see guys like Peyton Manning and Charles Woodson playing for 20 years. Incredible.

BTN.com: In all seriousness, how is your post-playing career going?
BW: It's actually going quite well. I graduate in May of this coming year and will start a two year residency program in orthodontics following that. My wife Karlie and I have a 1-year-old and are expecting here in the next couple of weeks. Life is moving quick, and I'm at a point that I thoroughly enjoy.

BTN.com: Do you have any famous patients?
BW: I asked Peyton if he'd come into the clinic while he's in town this weekend. With his denial, still no famous patients.

BTN.com: I assume you?ve seen the great viral videos of walk-ons learning they are on scholarship? How did you find out?
BW: I remember seeing a couple of those videos awhile back. Mine occurred, similar to a lot of those, during a team meeting. It was Javon Ringer's turn to give his senior speech in front of the team during my junior year of camp. He talked about how he looked up to me and used my work ethic to motivate him. He always went on and on about how I didn't say a whole lot but just went on about my business. Seriously, it would be an understatement to say he was over the top in communicating his thanks for helping instill some motivation within him. He was (No.) 23 and I was (No.) 25, so our lockers were always adjacent (except when for a short time they had me in 17). Anyways, after Javon's speech, and I remember this vividly, Coach Dantonio stood up unexpectedly and announced to me and the team that I would be on scholarship. It was one of the most rewarding moments of my life.

Let me just say something about Javon. This guy was a workhorse. One of the most talented running backs I ever played with and an even harder worker. I still believe to this day that he is the primary reason for getting that scholarship. All of the coaches really looked up to him, so for him to endorse me like that was significant.

BTN.com: So, how about them Spartans? When you were starring in East Lansing, what did you see that made you think this was possible?
BW: As you know, it is nearly impossible to pinpoint the success of a coach or staff to one or two reasons. To me though, Coach D and his staff were always very honest, up front, and quality humans. There are plenty of coaches who aren't on that path but are still wildly successful – this is certain in today's realm of college and NFL football. These qualities in my opinion, though, set a foundation for building and creating what they have created. It would be short-sighted to say there aren't other reasons, but being good people, as far as I know, is a hand up.

BTN.com: What was your favorite moment or play as a Spartan, and why?
BW: Michigan, 2008, slant in first quarter to the house (watch it above!). This one wins only because I didn't have enough big plays otherwise, hah. The pass was from Brian Hoyer, and the missed tackle was Stevie Brown (sorry Stevie) who has made a real fine carreer for himself in the NFL. We won that game in Ann Arbor, which is always a goal of ours.

BTN.com: How about the funniest thing or best interaction you ever had with Coach Dantonio?
BW: Funny interactions with Coach D? Only kidding. I love that he smiles and laughs more often nowadays. Best interaction was in a team meeting after we lost at Minnesota on Halloween. Keshawn Martin was running down the sideline en route to the end zone on a kick return and Coach D ordered the film to be stopped. It showed me half-taunting the sideline. He absolutely let me have it. Man, I'm still terrified of that man.

BTN.com: I have to ask this: What?s it like being in the huddle and catching a touchdown pass from Peyton Manning?
BW: Well, if you like getting your butt chewed out, it's delightful. Only kidding. It's a real treat to have played with him and learn from him. Best brain in the game no question whatsoever – that includes any offensive coordinator or head coach. It's nice to know that one of the best to have ever played is in your corner during a game, it gives you confidence.

OK, let?s do a few fill in the blanks…

Every time I?m in East Lansing, I must go to Tropical Smoothie for a meal. (my aunt owns it and hooks me up)

High school, college or NFL, Curtis Painter threw the ball so hard that I often had to ice fingers and hands.

The ball from my first NFL touchdown is displayed on a bookcase at our home.