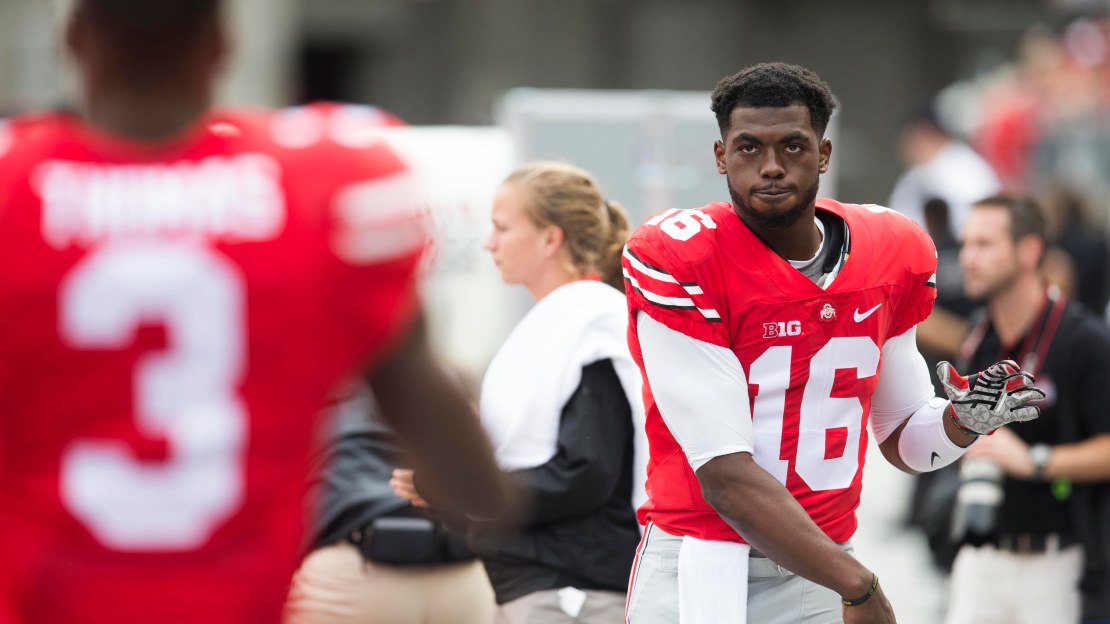 (AP) The question that won't go away at Ohio State: Who's the starting quarterback?

Coach Urban Meyer says the matter is undecided because neither Cardale Jones nor J.T. Barrett has been impressive through three games.

"Not one is beating out the other, and they're not playing great," said Meyer, whose top-ranked Buckeyes (3-0) host Western Michigan on Saturday.

Jones started the first three games. But Barrett has played in each, including the final 45 snaps in Saturday's 20-13 win against Northern Illinois after Jones threw two interceptions in the first half.

Meyer bristles at the suggestion he is platooning.

"Let's be clear. I did go with one guy," he said. "The guy didn't perform well, so we went with the backup. There is no set thing saying that we're a two-quarterback system – we're not. The backup's a very good player, whomever that may be. So we are going with `the guy.'"

The defending national champions were expected to have one of the most explosive offenses in the nation with either quarterback joining a Heisman Trophy hopeful in running back Ezekiel Elliott and former star quarterback Braxton Miller a hybrid back.

The Buckeyes looked the part in beating Virginia Tech 42-24 in the opener on Sept 7. They had six plays of 26 yards or more from the line of scrimmage, including Elliott's 80-yard touchdown run and Miller catching a 54-yard TD pass and running 53-yards for another.

"We have to do a better job as an offensive unit. That starts with the coaches," running backs coach Tony Alford said.

Even in the 38-0 win Sept. 12 against Hawaii, a six-touchdown underdog, Jones was pulled for three series in the second quarter. The Buckeyes led only 17-0 through three quarters.

Meyer said the "feel of the game" determines when he makes a change.

"It's not something I have written down," he said. "It's something that I have to make sure that you're on the same page that they are, and that's not easy. The thing that I worry about, and I know that's happening, is just the overwhelming mess that is on these 19-, 20-, 21-year-olds."

I feel like I've tweeted a similar graphic about six times the last month or so. pic.twitter.com/V0KdH0GRD0

The numbers are tight between them, and Meyer wants his quarterbacks to embrace the competition.

"If you think you're going to play at the next level, there is going to be probably one better than you stand right next to you, so get used to it," he said. "You are going to look. That doesn't mean you get hooked. If you have a bad day, you get replaced. That might not be everyone's philosophy and that's OK."

The Buckeyes committed five turnovers (three interceptions, two fumbles) against Northern Illinois and were a combined 2 for 15 on third and fourth down conversions while gaining 298 yards.

"One of the worst-executed performances since we've been here," said Meyer, who has a 42-3 record in his fourth season at Ohio State.

The offense has been so stagnant that in the past five quarters it has three touchdowns while the Ohio State defense has scored twice. Against Northern Illinois, linebacker Darron Lee's 41-yard fumble return for a touchdown late in the third quarter provided the difference.

"It doesn't really matter what the offense does," co-defensive coordinator Chris Ash said. "If they score 50 points or 5 points, we have a job to do, and it's to go out there and limit points and keep the opponent out of the end zone."