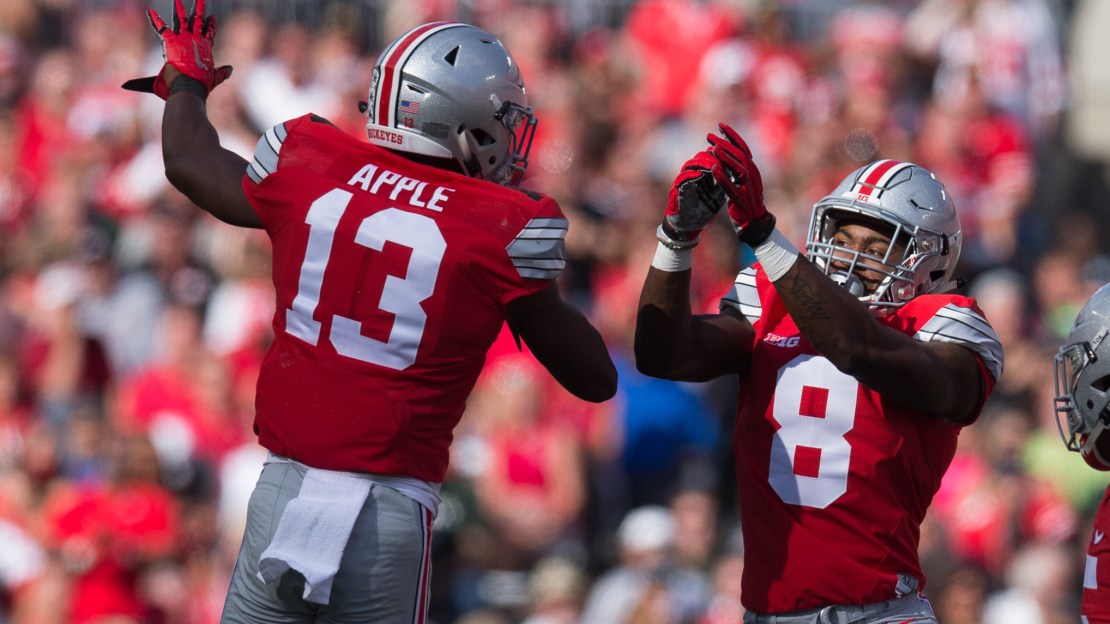 Wow. Ohio State and Michigan State are 1-2 in the AP poll. Can Nov. 21 hurry up and get here? That?s the date when the Spartans play at Ohio State.

Is this the best secondary that Urban Meyer ever has coached?

With back-to-back games allowing less than 100 passing yards, Meyer was asked to assess the play of his secondary after beating Northern Illinois.

"That's three games in a row, I think that two that we've kept — we kept them under 100 yards, right? That's unheard of," Meyer said. "Our secondary across the board is as fine as any secondary I've had. We've had some really good secondaries over the years."

Cleveland.com notes that Eli Apple, Gareon Conley, Vonn Bell and Tyvis Powell are playing at a high level right now. All four starters in the secondary have at least one interception through three games. But Meyer's best ever? Hmmm. It may be too early to tell.

That big-bang, last-second 57-yard field goal by Marshall Koehn that won the Iowa game vs. Pitt was one for the ages-and may be the kick that sparks the Hawkeyes to a season to remember.

The great Rick Brown of HawkCentral.com notes Koehn's kick tied the Kinnick Stadium record and was one yard shy of the school record. Tim Douglas kicked a 58-yarder in 1998 against Illinois. There have been more dramatic kicks in Kinnick Stadium, including Daniel Murray's that beat No. 3 Penn State in 2008 and Rob Houghtlin's boot that gave No. 1 Iowa a 12-10 victory over No. 2 Michigan in 1985. Still, Saturday?s night boot may be one that fans talk about for years.

"It was an emotional win, and an important win for our team," Kirk Ferentz said.

Now this is more like it! The Penn State offensive line had its way with Rutgers on Saturday, getting a push all night. The Nittany Lions need more of this moving forward.

PSU's 330 rushing yards were the most by the team since the Lions gained 338 against Illinois on the road in 2009.

Another week, another comeback win for Indiana. This time, the Hoosiers rallied to victory vs. Western Kentucky, using a strong running game to wear down the Hilltoppers. Now, the Hoosiers are 3-0 for the first time under Kevin Wilson and can start thinking about going to a bowl ? really.

Loved the heart and fight in Nebraska in the OT loss at Miami (Fla.). But the Huskers need to execute better, says the great Tom Shatel of Omaha.com.

How will this team rebound from a second tough loss in three weeks?

Speaking of searching for a direction, that?s Purdue after a brutal home loss to Virginia Tech. With explosive Bowling Green-which already has won big at Maryland–coming to West Lafayette on Saturday, a 1-7 start is a real possibility for the Boilermakers.

Bad news for Michigan State, as redshirt freshman CB Vayante Copeland is out for the season with a fractured vertebrae.

Senior Arjen Colquhoun started on Saturday in place of Copeland, and made two tackles. MSU can absorb the loss. Besides, how many great passing attacks will the Spartans face in the Big Ten?

Did you see where always opinionated Fox Sports analyst Clay Travis predicted that Michigan State will not be unbeaten when it plays at Ohio State on Nov. 21? Really. He did.

Travis thinks MSU will lose at either Michigan or at Nebraska. Hmmmm. I think the Spartans defense and senior QB will get them through those tough road tilts.

I like how Michigan is trending. The Wolverines are running the ball, and the defense is playing well. Don?t worry about Jake Rudock and the passing game. All will be well.

As for the once-maligned offensive line ? How about this stat from the great Nick Baumgardner of Mlive.com: Through three weeks, Michigan is ranked No. 2 (tied) nationally in fewest tackles for loss allowed. It doesn?t matter who they're playing, that's a big improvement for this group.