Dienhart: 'Bizarre and surreal' start to season continues at Rutgers 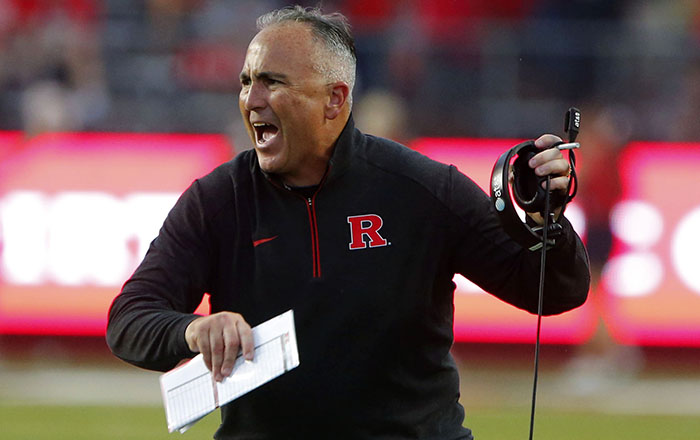 The tumult continues at Rutgers in what has been a bizarre and surreal start to the 2015 season.

Flood had come under scrutiny last month for an email he sent to a faculty member inquiring about a member of his team: CB Nadir Barnwell, who has since been dismissed. Coaches are told not to directly contact faculty concerning academic matters.

Per the report, school policy dictates: "All contact with faculty members or instructional staff, if necessary, should be handled by the Academic Support staff" and doesn't permit "coach-initiated contact of any type (e.g., oral, written, etc.) … between any member of the coaching staff and any Rutgers faculty member or associated instructional staff (teaching assistant, co-adjutant, part-time lecturer, etc.) with respect to any student-athlete."

"I believe that the discipline is severe and justified for his failure to follow policy," Barchi said.

"I know Coach Flood understands the severity of his transgressions and I am fully supportive of President Barchi?s decision to impose a suspension and a significant fine," Rutgers AD Julie Hermann said in a release.

Flood is the lowest-paid head coach in the Big Ten, earning $1.25 million this season. He inked a two-year extension through the 2018 season in September 2014. As part of the extension, Rutgers agreed to pay Flood a $1.4 million buyout if he is terminated without cause at any point through Feb. 28, 2019.

"I take full responsibility and accept the consequences of my actions," Flood said in a release. "I care deeply about my student-athlete?s academic performance. As the head coach, when I recruit players, my responsibility to them and their families is to do all I can to make sure they leave Rutgers with a degree and are prepared for a successful life off the football field."

What impact will this have on the season? Who knows? Here's what we know: Assistant head coach Norries Wilson will serve as the interim coach, and Flood will continue to be around the program during the suspension.

The Scarlet Knights are off to a 1-1 start, opening with a 63-13 win vs. FCS Norfolk State and losing a 37-34 heart-breaker to Washington State last Saturday allowing a last-minute touchdown.

Flood will miss this Saturday?s game at Penn State, a school Rutgers has made no bones about wanting to forge a rivalry with. RU lost a gut-wrenching game to the Nittany Lions last year, allowing a late touchdown in a 13-10 loss at home in the program?s first Big Ten game.

Flood also will miss home games vs. Kansas (Sept. 26) and Michigan State (Oct. 10). The Jayhawks are awful; the Spartans are terrific. Rutgers is off Oct. 3. In the end, it wouldn?t be a shock to see the Scarlet Knights perhaps go 2-1 in Flood?s absence. If so, that would be terrific.

So, here we are, with Flood under a fire. From all accounts, he is a good family man who has embraced causes like voracious support of the military and the Special Olympics. All of this off-field fire is counter to Flood?s public persona.

The improper e-mail incident is just one of many black eyes for a program that has been hit hard and fast in recent weeks.

Then, over the weekend, star wideout Leonte Carroo was suspended indefinably after an incident following the Washington State game. Carroo was subsequently charged with assault in a domestic violence incident.

Flood, 44, is in his fourth season since taking over for Greg Schiano. He has a 24-17 record, helping guide the program into the Big Ten last year. And the school?s debut in its new league was a success, as the Scarlet Knights went 8-5 overall and 3-5 in the Big Ten with a bowl win.

This was a program that had some momentum coming into 2015 and looked to return to a bowl. But the personnel losses-the secondary has been hit hard–and the Flood suspension may threaten to derail what was a promising season. At the least, some much-needed closure was brought to a situation that was looming over the program like an albatross for weeks. An end needed to be arrived at so all parties could know what they were dealing with–and move forward.

Perhaps all of this will serve as a rallying point for the team, galvanizing it and fostering an us-against-the-world mentality. Or, maybe the maelstrom of controversy will cause the team and the season to splinter.

"Moving forward, I will make sure I adhere to all University policies and I will place an even greater emphasis with our staff on knowing, understanding and following every University, Big Ten and NCAA rule," Flood said.