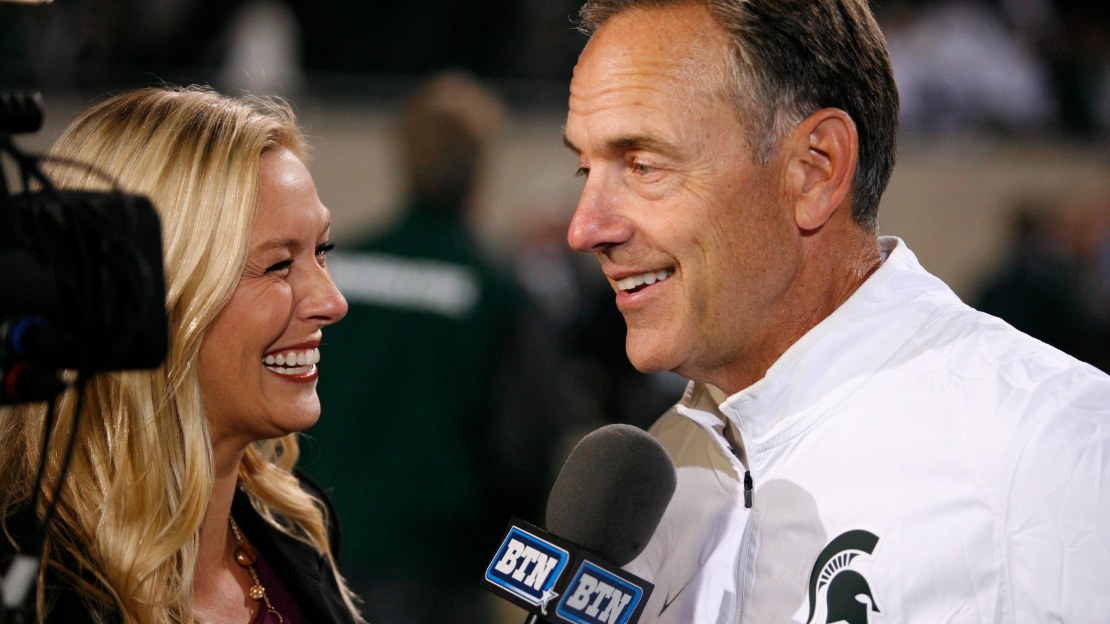 That win over Oregon by Michigan State? It put the Spartans on a higher national stage. Really, the only thing left for MSU to do under Mark Dantonio is make the playoffs-and win a national title. And this victory vs. the Ducks will look good on MSU?s resume come early December.

And as Mike Griffith of Mlive.com points out, the triumph over the No. 7-ranked Ducks - who entered a game as underdogs for the first time since 2011 - made a much-needed statement for the Spartans (2-0) as well as the Big Ten. Prior to MSU's victory, the last Big Ten team to win a non-conference, regular-season clash of top 10 teams was Ohio State, some nine years ago at Texas.

Did Penn State knock your socks off on Saturday? No, but as David Jones of Pennlive.com points out, the young talent sure is exciting.

I am excited by the likes of young RBs like Saquon Barkley and Brandon Polk. And Jones is pumped, too: We got a first-hand glimpse on Saturday of the athletic fizz behind all those recruiting stories that have been peppering the sites since James Franklin took over 20 months ago and began signing studs. Jones can?t recall any such concentration of explosive speed and agility on a Penn State side in 25 seasons of covering the team. And neither can I.

Iowa is 2-0, sending a message with its comeback win at Iowa State.

"That's who we want to be this year," said fifth-year senior center Austin Blythe, who had lost three of the last four in the Cy-Hawk series. "That's what we talked about all winter long, all summer long. That kind of symbolizes what we've been talking about as a team."

Up next: a visit from Pitt. Can Iowa stay hungry?

Nice win for Minnesota at Colorado State. Was QB Mitch Leidner spectacular? No, but I don?t think he should be pulled and replaced with Demry Croft like Jim Souhan of the Minneapolis Star Tribune feels.

Croft may be more talented, but the Gophers need Leidner?s veteran savvy.

This hip, hip, hoo-ray cheer of Mike Riley? Well, it could be new tradition at Nebraska.

?At first when (Riley) told them what he wanted to do, they kind of looked around,? said NU offensive coordinator Danny Langsdorf. ?He told them it?s kind of corny, but that?s what he wants to do.
?It got louder and louder as they went.?

Hey, players and fans will yell anything if Nebraska wins like it did vs. South Alabama each week.

This is why I love college football.

Still, who?s the quarterback? Doug Lesmerises of Cleveland.com lays it well. Against Hawaii, for the first four drives, Cardale Jones was the guy. For drive five, with the Buckeyes leading only 7-0 more than 22 minutes into the game against a 41-point underdog, J.T. Barrett was the guy. That was a thing-notes Lesmerises. It wasn't a rotation. No one plans on four drives for the first guy, then series five for the second guy. This was a change because the offense wasn't working. And it cracked the door, in that moment in the second game of the season, exactly eight months after Urban Meyer's team won the national championship, on the ?who is the QB? question.

Is this gonna be an on-going issue? Wouldn?t just picking one QB benefit all involved instead of trying to appease two guys?

Dan Duggan of NJ.com chronicles the myriad missteps by Rutgers in its heart-breaking loss to Washington State. Still, despite the faux paus, the Scarlet Knights still came within a whisker of winning.

This stumble was most crushing: Rutgers was totally unsettled on the game-winning touchdown. Players were running on and off the field as the Cougars snapped the ball, which resulted in a substitution infraction penalty. Amid the confusion, Wazzu hit an 8-yard touchdown to win the game.

Looky here: Northwestern is now 2-0. Now, can it handle success?

This week?s trip to Duke drips with intrigue. Yes, a Northwestern at Duke game really matters. And, that?s a neat thing. The Wildcats have been a Big Ten surprise. If NU comes back from Durham with a win, things will get very interesting in the Big Ten West.

"Obviously this challenge coming up this week is going to tell us a lot about our team," Pat Fitzgerald said. "All hands on deck. Let's see if we're ready to go play."

Like NU, Indiana also moved to 2-0. And for the Hoosiers, the play of the defense was encouraging.

Zach Osterman of IndyStar.com notes that Indiana?s defense allowed the Panthers 406 total yards of offense - a statistic inflated by meaningless late drives - and forced three turnovers in a 36-22 win Saturday night at Memorial Stadium. Progress! The Hoosiers? 2-0 start is their second under coach Kevin Wilson, and their first since 2012.

?When we watched the tape last week, with the defense, I said, ?I don?t like the number of times our defensive linemen, linebackers, are going sideways,?? Wilson said postgame. ?I just want to get guys to be more aggressive.?

Purdue beat FCS Indiana State. Yes, that?s a big deal for a program that now has just five wins since 2013. Three of those are vs. FCS schools and one vs. the MAC. Still, at this point, ANY victory is sweet.