Big Ten links: Could this be the blueprint for OSU QB situation? 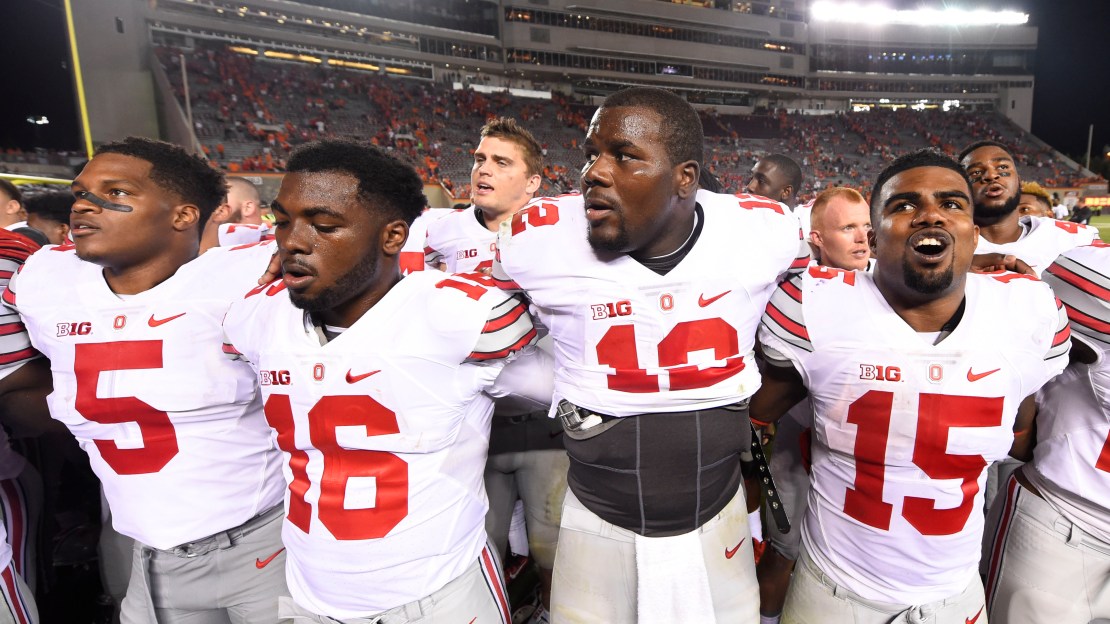 The great Bill Landis of Cleveland.com wonders if we saw at Virginia Tech the Buckeyes? plan on how they will use QBs Cardale Jones and J.T. Barrett the rest of the season.

"It's delicate, man. I don't know," Meyer said Wednesday when asked if this is the blueprint for Ohio State's quarterbacks.

"I know J.T. had one rush for 40 yards and one pass for a touchdown, he was engaged, he was leading the team. He knew he wasn't going to take the first snap and talked to the team before they went out. There might be packages that I'm gonna put in, we talked about that today, with the quarterbacks, with maybe J.T. I don't know."

Looking at the OSU schedule, I think there probably will be enough blowouts to allow whoever doesn?t start plenty of reps in the second half of games.

Boy, what a ?problem? for the Buckeyes to have.

Gold & Black Illustrated says if rest doesn't help Anthrop get closer to 100 percent, then there could be other options. Assuming he stays under the threshold — he'd have to play in less than 20 percent (three games) of the contests in the first half of the season — he could apply for a medical redshirt. It goes without saying that losing Anthrop would be a HUGE blow for a Boilermaker attack that desperately needs his playmaking skills.

"Everything has crossed our minds," coach Darrell Hazell said. "And we'll take it day-by-day. We don't want to do that. But obviously we want him as close to 100 percent as we can get him."

Got five things to watch in that monster Oregon at Michigan State game.

Mlive.com says the return of CB Darian Hicks will be one of the biggest things to keep an eye on. He missed much of fall camp with mono after starting 10 games last season and performed relatively well on last year's trip to Oregon. If Hicks is healthy, he'll be the fifth defensive back on the field when the Spartans go to their nickel.

Indiana had nine players miss the season-opener for one reason or other. Surely, they would have helped a Hoosier team that struggled mightily to subdue FCS Southern Illinois last week. Then again, just one absent player was a projected starter on defense, so ?

The one player not coming back this week is a very good one: sophomore linebacker Tegray Scales is serving a two-game suspension and will sit out Saturday. Kevin Wilson took issue with the suggestion that all nine — Darius Latham, Tim Gardner, Ralph Green III, Isaac Griffith, Tyler Burgett, Will Dawkins, Tegray Scales, Alex Rodriguez and Greg Gooch — were suspended. Some, he said, were just held out.

Whatever. They weren?t playing-and that?s what mattered.

More analysis of Michigan at Utah ? the Wolverines were thinking too much vs. tempo offense. So says Jim Harbaugh.

"That's one thing we can do a better job at," he said on the Big Ten coaches' teleconference. "It felt like our players really knew what to do, but there were times that you need to understand what to do, diagnose it, then react, whereas there might have been a step in there where we were recognizing it, understanding what to do and double-checking ourselves and then reacting. Whatever it is, the gun goes off, the ball is snapped, the bell is rung, and instinct took over. The process needs to quicken up."

Listen to Harbaugh's full teleconference below:

Remember the criticism the Iowa rushing attack came under last year? Yes, so do I. Well, so far, so good for the Hawkeyes. That LeShun Daniels is a load!

The Quad City Times notes that Daniels and Jordan Canzeri combined for 241 yards of offense in Iowa?s season-opening win over Illinois State, including 90 receiving yards by Canzeri. Their abilities quickly caught the attention of Iowa State coach Paul Rhoads.

?Iowa?s backs hit the holes hard and fast and they?ve shown the ability to pick up yardage before the defenders can get to them,?? Rhoads said. ?They?ve got a great 1-2 punch in the backfield and a very formidable run offense.??

Now, after one game, the question can be asked: Does Nebraska need a feature back? Is it time to stop with the rotation and just ride one hoss?

Terrell Newby, Imani Cross, Mikale Wilbon, Adam Taylor and Devine Ozigbo ? so many choices. I love the speed and toughness of Wilbon. But, that?s just me ?

?I?ve had so many practice reps it feels like it?s been so long. I kind of forget I?ve only been here still less than a month. Game day, for me, was a lot easier than any practice I?ve had here so far,? he told the media.

Lewis tied for the team-high with four tackles against Norfolk State. ?It went smooth. I learned all the signals and things like that,? Lewis said. But his second game with Rutgers poses a much bigger test. Washington State loves to pass ? and pass ? and pass. Can he cover?

After that flying thud of a start vs. Temple, Penn State says it is evaluating everything. Sounds about right ?

Pennlive.com notes that there were 10 sacks. Just 103 passing yards. And PSU got away from feeding tailback Akeel Lynch, who finished with 78 yards on 10 carries and scored on a 42-yard run in the first quarter. The offense? Well, it was bad.

"Yeah, we're evaluating everything, had some hard discussions this weekend with all of us, the entire staff," James Franklin said earlier this week.

"I think there are some things we can do a better job of in terms of managing the game, continuing to run the ball.

"Obviously the more success you have running the ball it makes it easier to continue doing that, but I think we can run the ball more, move the pocket more."

How great was it for Northwestern to have back WR Christian Jones? The guy is a special talent-an NFL talent.

This past spring, Jones underwent surgery to repair torn cartilage in his left knee (the same knee where he tore his ACL in August 2014). So he missed all of last season and spring ball this year. Saturday he finally returned.

?It was weird,? Jones said. ?I really don?t know how to explain it, at one point in the game I zoned out and didn?t really realize I was in the game, so it was a new feeling, but it?s just like riding a bike.
?After a couple plays you get back into it and start to feel a lot better about what?s going on.?
NU needs his playmaking skills on an offense that often lacks explosiveness.