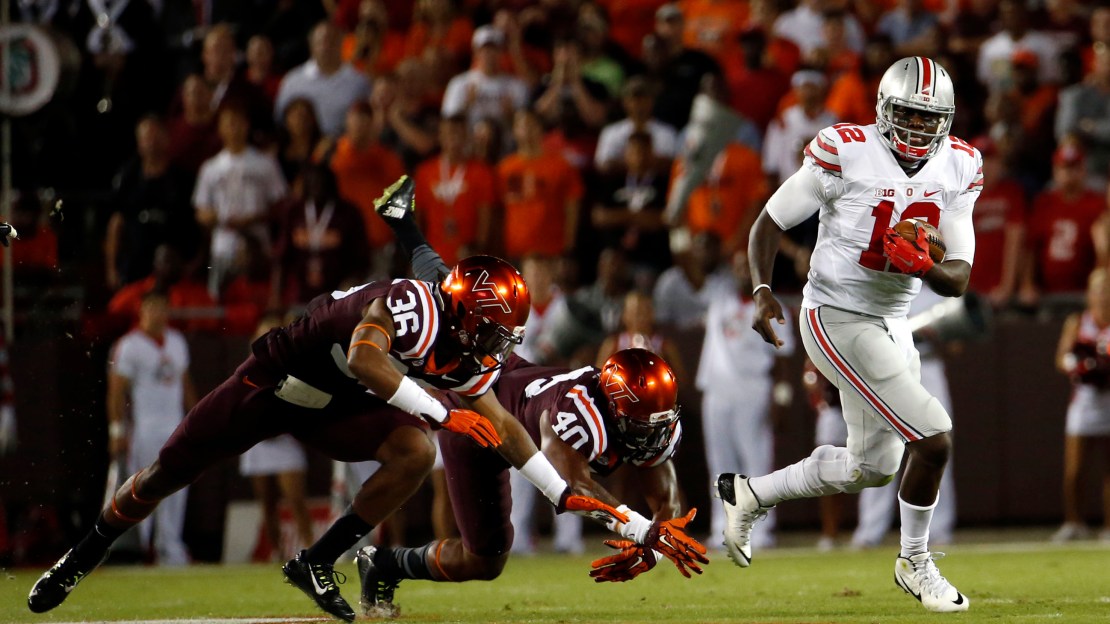 (AP) Cardale Jones started at quarterback for No. 1 Ohio State against Virginia Tech, and picked up right where he left off during his improbable three-game run to a national championship last season.

College football's most-talked about quarterback competition came to a conclusion – maybe? – Monday night when Jones went out for Ohio State's first offensive series. He completed 3 of 4 passes on the drive, right on the money with every throw, including a 24-yard touchdown he lofted off-balance to Curtis Samuel in the end zone.

Jones, who led the Buckeyes to three postseason victories in his only three starts last season, was locked in a tight preseason competition with J.T. Barrett for the No. 1 job.

Ohio State coach Urban Meyer refused to show his hand going into the opener against the last team to beat the Hokies. Right up until kickoff, he did everything he could to keep his choice a mystery.

The two stretched and warmed up their arms together during pregame. Pretty typical. Reporters watched for any signs that might predict the starter.

Jones took a couple of snaps from first-team center Jacoby Boren – then Barrett did the same thing.

On Barrett's last throw before heading back to the locker room, he was out of receivers, so he waved Jones to go deep and hit him in stride as the big QB ran toward the end zone.

When the starters were announced over the public address system in Lane Stadium, no quarterback was announced for Ohio State.

In 7-on-7 drills, Barrett took the first rep, but then the two alternated. When they went to full 11-on-11, same thing.

Jones took over the Buckeyes last year after Barrett broke his ankle in the regular-season finale against Michigan. His first career start was in the Big Ten championship, with the Buckeyes needing an impressive performance to have a shot to make the College Football Playoff.

Before being thrust into the starting lineup for the biggest game of the season, Jones' most notable moment at Ohio State came when he tweeted about not being in college to "play school."

That was forgotten fast when Jones threw three touchdown passes in Ohio State's 59-0 win over Wisconsin. The Buckeyes were on their way to the playoff, where they beat Alabama and Oregon to win the national title.

This year started with the Ohio State quarterback question being thought of as a three-man race. Braxton Miller, the two-time Big Ten player of the year, was coming back from shoulder surgery and hoping to return as a quarterback. That didn't work out. Miller decided to switch positions and played receiver in the preseason.

Miller's first catch of the season was a diving grab over the middle for 24 yards in the first quarter. Looks as if that moved worked out OK, too.

That left Meyer with two good options and quarterbacks with different skill sets. Jones is 6-foot-5 pocket passer who can wing it 70 yards but is still nimble enough to do some running.

Barrett plays the position like a point guard, precise on short passes and deftly running the read option. He doesn't have Miller's speed, but he is quick and elusive.

Meyer has said that both quarterbacks are likely to play this season but he hasn't seemed keen on the idea of using a two-QB system.

The starter will likely get the bulk of the work and the backup will be, well, the backup.

Things will get interesting if Jones struggles. How much patience will Meyer have with his starter knowing he has an ace in the hole?

For now, Jones is the man for the Buckeyes.