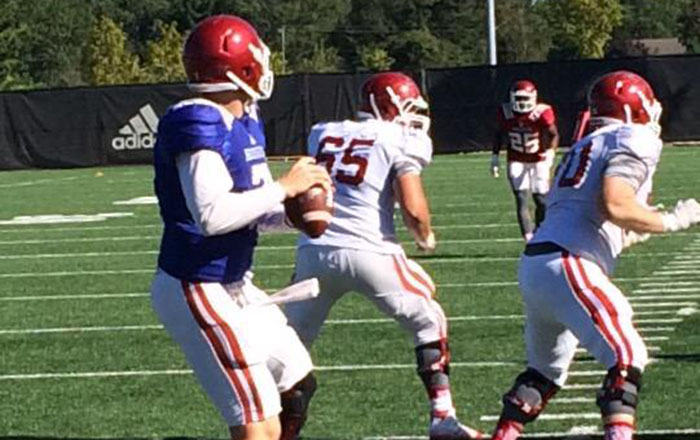 The annual summer trek through Big Ten country continues as the 13th stop on our tour brought us to Bloomington, Indiana, where we watched the Hoosiers practice Monday morning.

Here are the fives things I learned at Indiana.

1. The offensive line is legit, going 8-10 deep. I can?t imagine there has been a better one in Bloomington since Bill Mallory roamed the sidelines. Senior left tackle Jason Spriggs is a sun blocker and future NFL pick, but he must get tougher and edgier. Still, as pro scouts say: He passes the eyeball test right down to the giant arm tattoos. Spriggs gets the headlines, but junior right guard Dan Feeney is the best of the bunch. He plays with a defensive edge, going to the ?echo? of the whistle. Keep an eye on left guard Wes Martin. He?s just a redshirt freshman but has promise. Senior Jake Reed anchors at center. Junior right tackle Dimitric Camiel is a towering presence who can push the pile. And this is well-coach group led by line coach Greg Frey, one of the best in the business who doubles as co-OC.

OL will undoubtedly be a strength for IU - particularly Spriggs and Feeney. Wilson called Feeney "the best player on the team."

2. The receiving corps has potential. Still, it?s too bad diminutive sophomore J-Shun Harris is out for 2015 with a knee injury. I like sophomore Simmie Cobbs, a big target and No. 1 option. And junior Ricky Jones is stepping up as a No. 2 man. He made some nice grabs today. Diminutive junior Mitchell Paige also saw lots of action. Sophomore Dominique Booth didn?t do much today. The staff is awaiting word from the NCAA on if JC wideout Camion Patrick will be cleared. He?s a thick and physical target. Sounds like he?ll learn his fate on Thursday. If eligible, he will be in the rotation. There are three legit tight ends. Senior Anthony Corsaro and senior Michael Cooper are the best blockers. Sophomore Jordan Fuchs has the best hands.

Appears some of the younger WR's will play (Westbrook, Thornton). Could use another burner or two. Simmie Cobbs looks like their top WR

3. The front seven has promise on defense. That said, the unit needs to tackle better. The linebackers can run. Sophomore Tegray Scales looks like a future star. Junior T.J. Simmons is a veteran leader who has a nose for the ball. Depth is good, too. And the linemen in this 3-4 are solid, led by senior end Nick Mangieri and junior tackle Darius Latham. Senior nose Adarius Rayner is an anchor inside who won?t be outworked. Sophomore Nate Hoff is hard to move-and big. It will be vital for this group to get a pass rush to help a secondary that is largely young and unproven. If they are asked to cover for extended stretches, it could get ugly for a team that had the worst pass defense in the Big Ten last year.

4. Nate Sudfeld looks good. And, that?s good. When he went down with a shoulder injury in Game 6 at Iowa in 2014, the Hoosiers were 3-3, including a road win at eventual SEC East champ Missouri. They proceeded to lose six in a row to torpedo the season. The senior is one of the top quarterbacks in the Big Ten. He is a big body who can see the entire field. Plus, he can sling it and throws a nice deep ball. The backup? The staff would like to redshirt sophomore Zander Diamont. If Diamont does redshirt, redshirt freshman Danny Cameron would be No. 2. Both Diamont and Cameron saw lots of reps today. But, it?s a big drop to them from Sudfeld.

5. UAB transfer Jordan Howard looks good. He lacks Tevin Coleman?s burst but is a tough runner between the tackles. He is built to work between the tackles and also is the team?s fastest back. The junior showed at UAB that he can carry the load for a game and/or season. Sophomore Devine Redding is another strong runner who had his moments today. Redshirt freshman Ricky Brookins showed a burst.

Like the looks of both IU RB's - UAB transfer Howard is a big guy who runs hard. Redding also impressive in team drills