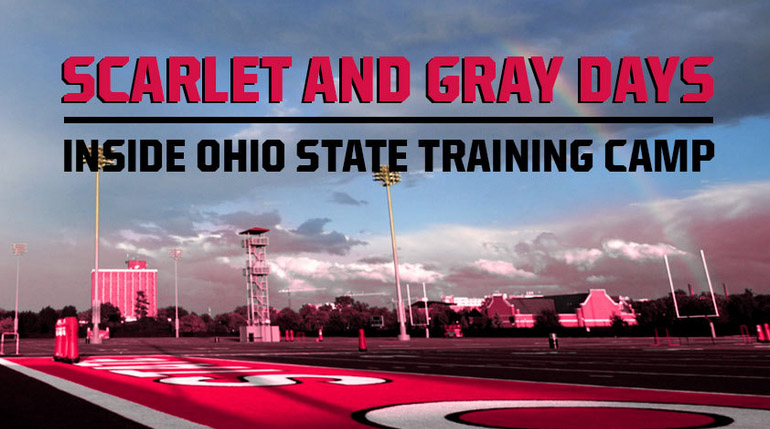 Thank you, @OsuCoachCoombs, for providing one of the many great moments on @OhioStAthletics' "Scarlet & Gray Days." http://t.co/cJwcZOSp6l

Did you miss BTN Originals' all-access look at the defending national champ Ohio State's training camp? If so, catch encore presentations at 5:30 and 9 p.m. ET tonight on BTN.

Whether you watched it or not, I wanted to share a few of my favorite moments from the series' first of two episodes. Speaking of which, the second episode will debut at 7 p.m. ET Wednesday.

After a great intro from J.K. Simmons, the show starts off with cameras at linebacker Joshua Perry residence. We saw Perry's kitchen, which was a little messy, and couldn't help but notice this pillow on his bed.

Watching "Scarlet & Gray Days," and @OhioStAthletics LB Joshua Perry definitely has a pillow with his name on it. pic.twitter.com/d8Y9ay1RXV

We then moved to quarterback Cardale Jones' residence. He has some cool posters hanging from his wall.

Now, to Perry's car, where the linebacker talks about he and Jones' crush on fighter Ronda Rousey. Perry seems to think he's on the inside track.

"If you look at the picture, she's leaning in." - Joshua Perry, on @RondaRousey in selfie on "Scarlet & Gray Days." pic.twitter.com/plTSlBuRMV

During a team meeting, one in which freshmen were paired with an upperclassman "big buddy," Ohio State assistant strength coach Kenny Parker came up with these great nicknames for the vets:

At one point during drills in the indoor facility, Urban Meyer asks someone who the unfamiliar faces are watching practice, and this was his response after learning they are NFL scouts:

"Who are these guys? Scouts. Scouts? We don't have any NFL players." @OSUCoachMeyer, joking on "Scarlet & Gray Days" pic.twitter.com/OekA0bLhpR

Ice baths made several appearances. While good for the body, they are no fun – not to mention very cold, something that caught Braxton Miller by surprise.

Not a bad shot to end the first episode, huh?

Taylor Decker is riding shotgun in a car with a couple fellow offensive linemen, when he delivers this gem:

"This is the most excited I've been for a camp without being really excited, if that makes sense."

Assistant Kerry Coombs is a riot (seriously, watch the episode to see his playful personality). He has a great interaction with Jalin Marshall, which is featured in the video at the top of the post.

After star running back Ezekiel Elliott completed a drill, and finished it emphatically, running back coach Tony Alford joked, "He didn't take his medicine today!"