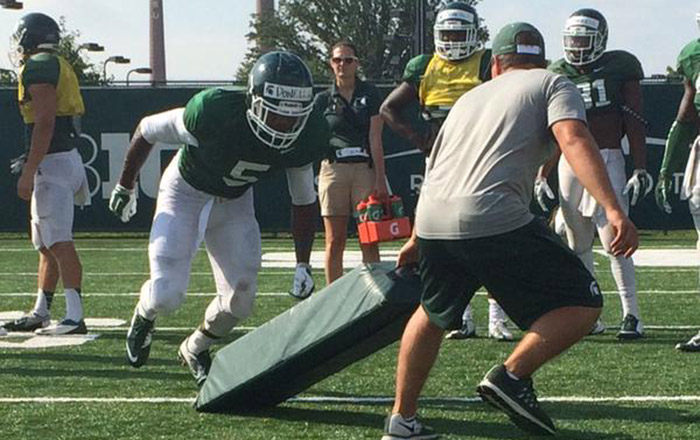 The BTN bus just left Michigan State practice, and now it's time to share some nuggets I gathered while I watched the Spartans in action Tuesday morning.

Michigan State has a tradition during camp under Mark Dantonio of having all personnel wear their names on their shirt written onto white tape.

O-line coach Mark Staten has a shaved head, which caught my eye as a fellow baldy. He told me he does it for his father, who recently beat cancer after five chemo treatments. "It's for my Pops," said Staten. "I love him. He taught me toughness."

MSU made a nice offseason hire in Mark Snyder, who will work with special teams and linebackers. He was DC at Texas A&M and has worked with Dantonio in the past. Snyder is smart, energetic and personable.

Co-defensive coordinator Harlon Barnett will continue to coach from the press box, while co-DC Mike Tressel will be on the field.

Star OT Jack Conklin studied in Australia this summer. It adds another delicious layer to Conklin's already delicious story as a former walk-on-turned All-American. The junior will be a first-round pick when he leaves MSU, but he figures to stay through his senior year in 2016. O-line coach Mark Staten says Conklin wants to win the Outland Trophy. He just may do it. And to think, Conklin's only offer out of high school was to $2,000 a year at Wayne State. He almost went to Fort Union Military Academy out of high school before MSU offered a walk-on chance. Did Michigan? "No," he said.

Is Jack Conklin of @MSU_Football the best OT in the Big Ten? pic.twitter.com/j4f4rlEJKY

The top o-line today was junior Jack Conklin at LT; sophomore Brian Allen at LG; senior Jack Allen at C; senior Donavon Clark at RG; junior Miguel Machado at RT, as regular right tackle Kodi Kieler was out with injury. O-line coach Mark Staten raved about Machado's play today. "Shilique (Calhoun) couldn't get by him," Staten told me. As I wrote in my practice recap, this may be the Big Ten's best offensive line.

The running back spot is interesting. Redshirt freshman Madre London and sophomore Gerald Holmes are running with the No. 1s. But true freshman LJ Scott looks impressive. And junior Delton Williams worked out in full pads for the first time as he comes back from suspension. He is now paying his own way to school.

MSU frosh RB LJ Scott has looked tremendous so far. Several good RB's - but will be tough to keep him off the field

This will be one of the top defensive lines in the Big Ten. Today, the first team was senior Shilique Calhoun at one end and sophomore Demetrius Cooper at the other. The tackles were senior Joel Heath and redshirt freshman Craig Evans, the kid who was denied admission to Wisconsin. Sophomore Malik McDowell also rotated in. Senior Lawrence Thomas wore yellow.

With what the Spartans have on both lines of scrimmage, clearly, they are getting use out of the program's state-of-the-art facilities and weight room.

Shilique Calhoun is a natural in front of the camera, evidenced by the @MSU_Football tour he gave us on @periscopeco. http://t.co/HZAow4xlTv