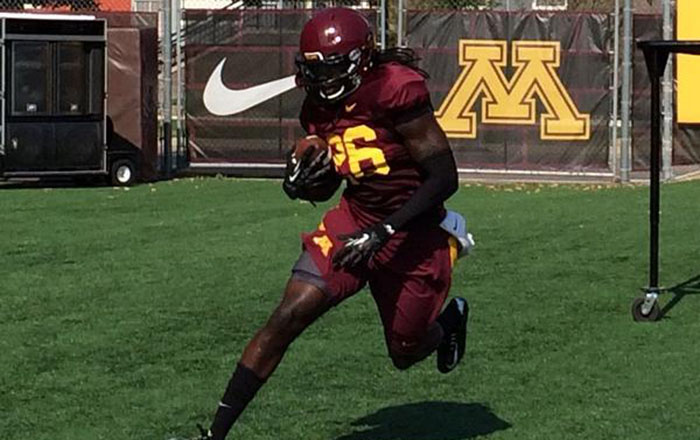 The fourth stop on our annual summer trek across the Big Ten brought us to Minneapolis, Minnesota, where we watched the Golden Gophers practice twice.

Before we turn our attention to Wisconsin, which we will watch Saturday morning, here are five things I learned at Minnesota practice Thursday and Fridays:

1. The passing game still needs work. As a junior, QB Mitch Leidner probably is what he is at this stage of his career: a workmanlike quarterback with limitations. Can you win with him? Yes. Can you win BIG with him? Probably not. He isn?t going to transform into John Elway at this point, but that's OK. Leidner has nice touch on the deep ball. He needs work on intermediate routes, screens. He also is a leader and hard worker who knows the offense. Minnesota will go only as far as he takes it. A better corps of receivers should help. The staff has installed an up-tempo package for Leidner that may be used 20 percent of the time. Stay tuned.

2. The secondary is as good as advertised. In fact, if there is a better one in the Big Ten, I want to see it. Senior corners Eric Murray and Briean Boddy-Calhoun set the tone. Then there are senior safeties Damarius Travis and Antonio Johnson. Travis is a big hitter. Murray and Boddy-Calhoun are big, physical corners who can man-up and play the run. The ability and experience of this unit will allow flexibility among the front seven from a blitz and stunt format.

Athleticism on D really stood out - particularly in the secondary. But everyone can run on the D - concern might be size at pt of attack

3. Offensive explosion still may be an issue. This team needs some playmakers on the edge. Excitement percolates around redshirt freshmen wideouts Jeff Jones, Melvin Holland, Desmond Gant, Isaiah Gentry. Gentry has a hammy injury that kept him out of the two practices I watched. He has been pegged by most to be perhaps the best of the bunch. At 6-4, 206, he?s a rangy target. Keep an eye on him. Holland, sophomore Eric Carter and senior KJ Maye were running with the ones when I watched practice. Maye is the team?s top returning pass catcher with 16 grabs in 2014. Jones, Gant and true freshman Hunter Register were with the second team. Another true freshman who caught my eye: Rashad Still, a 6-5 target. He is one of several big wideouts on the roster. Interesting.

Desmond Gant is one of several promising redshirt freshman WRs for a Minnesota offense that needs playmakers. pic.twitter.com/BHEqIblthD

4. The offensive line could be a cut-above. That said, depth may be an issue and there is a lack of top-shelf NFL talent among the upperclassmen. Left tackle Ben Lauer injured his left knee in an earlier practice but won?t need surgery. He was out when I was in Dinkytown watching practice. The first-team was lined up thusly when I watched: senior Josh Campion at left tackle; senior Joe Bjorklund and/or Jon Christenson at left guard; senior Brian Bobeck at center; sophomore Connor Mayes at right guard; giant junior Jonah Pirsig is at right tackle. This is a big, physical group with experience. Pirsig may be a late-round NFL pick. Campion has a chance to be a late pick, too.

BTN Bus Tour #Gophers Most impressive is the depth Minn has built on the D Line & Secondary.O Line they feel like they have 8 who can start

5. No one can replace TE Maxx Williams. He was an all-time great who left campus two seasons early after catching a team-high 36 passes in 2014. He was that good. Senior Lincoln Plsek, sophomore Nate Wozniak and sophomore Brandon Lingen are contending. Wozniak is the most intriguing. Why? Because he?s 6-10, 270 pounds. And he has gotten stronger and more flexible, changing his body. Lingen (coming off a broken collar bone) was running with the first team at the practices I watched. He?s versatile in the mode of departed Drew Goodger as an H-back/TE. No doubt, the tight end could be the best friend of QB Mitch Leidner once again.