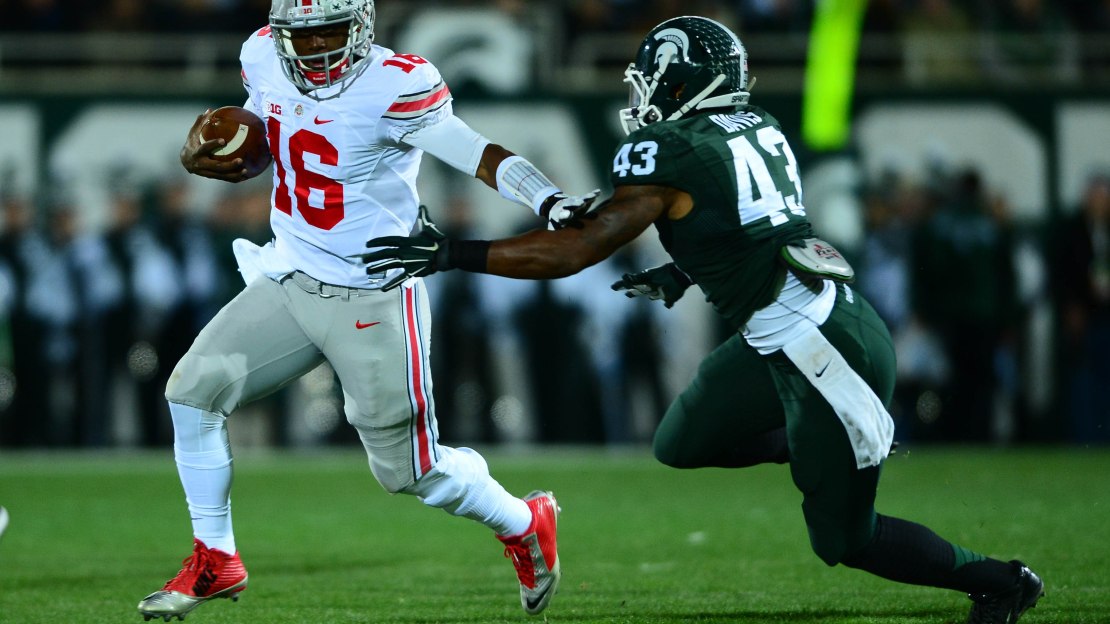 As I travel on I-35 North toward Minneapolis to visit Golden Gophers? camp, I decided to reach into my Mailbag as I eat breakfast bars masquerading as candy bars.

The cards and letters are coming fast. More Red Bull!!

On to the love letters ?

What does Ed Davis? injury mean to Michigan State? – Matt

This is a big loss for the Spartans, as they already were replacing CB Trae Waynes, FS Kurtis Drummond, LB Taiwan Jones and DE Marcus Rush. Now Davis, who Mark Dantonio said is one of the best linebackers the program has had under his watch, is out for the season with a knee injury. Sophomore Chris Frey will step into the void. This program should be mature enough to absorb the loss. The Oregon game will be a good first test for the defense minus Davis.

Does Tommy Armstrong have the tools/ability to run Mike Riley?s offense? – Ed Starke

After watching two practices, I have concerns. Armstrong lacks consistent touch and accuracy. He has a rep for being sharper on long passes than he is on shorter ones. Not good in Riley?s pro-style/West Coast attack. Riley won?t ask Armstrong to play totally out of his comfort zone, still using some zone reads. But when push comes to shove, Armstrong is going to need to hit closer to 60 percent of his passes to make things click and give this attack balance.

What side of the ball is buying into Coach Mike Riley's program the most, the defense or offense? – Rodney Rienfeld

Both sides seem to be buying in, but I think the defense is ahead of the offense. Defensive coordinator Mark Banker has simplified things, which should help players think less and react more. Banker told me he likes his unit up the middle. Led by Maliek Collins, the tackles are strong. And Josh Banderas is a good middle linebacker. SS Nate Gerry is a future pro.

Why is Iowa always stuck at 7-5? – Chuck Phillips

The Hawkeyes have been stuck in a bit of a malaise since going 11-2 in 2009. Since then, Iowa has a 34-30 overall mark and is 19-21 in the Big Ten over the last five seasons. This year, Iowa may be fighting for relevancy in the Big Ten West. The program has been good on defense. It?s the offense that has proven to be troublesome. The attack consistently lacks explosiveness, as there have been few difference-makers at receiver or running back in recent seasons. And QB play often has been pedestrian. After watching practice this year, I wonder how good the attack will be this season. Bottom line: This may be another 7-5 Iowa team.

How much pressure will be on Tommy Armstrong this season now that Ameer Abdullah is gone at Nebraska? – Nick Vargas

Armstrong needs to do his job as a passer and show development. When everyone in the stadium knows Nebraska has to pass, he must still hit the pass. But the direct pressure on replacing Abdullah rests with RBs like Terrell Newby, Mikale Wilbon, Adam Taylor and Co. The Wilbon kid is intriguing and really coming on.

I guess. And I also could grow a full head of hair. Will either happen? Probably not. I like Minnesota in the West. Wisconsin also looks good. And Nebraska looks to be ahead of Iowa, too.

Why are you such a Gopher homer? Jerry Kill is 0-3 in bowl games so far at Minnesota and I think the team?s ceiling this year is seven wins in the regular season. – Brad Sunderland

I?m a Gopher homer because I like and respect Kill and his staff and how they go about their business. They have earned their stripes along the way, working their way up the backwaters of the sport to the Big Ten. Nothing has been handed to them because they had a famous last name or great connections. So, honestly, I am more of ?Kill homer? than a ?Gopher homer.?

[ MORE: Here's what Tom Dienhart will be watching at Minnesota practice ]

At this point in time, which conference division would you rank as superior: The Big Ten East or the SEC West? – Bob

It?s the SEC West. There are no easy outs from 1-7 in Alabama, Auburn, LSU, Texas A&M, Arkansas, Ole Miss and Mississippi State. The Big Ten East still has some programs developing in Indiana, Rutgers, Maryland, Michigan and Penn State. I am not sure if any of those four teams is better than the No. 7 team in the SEC West right now.

Is Illinois QB Wes Lunt a pro in the making? – Patrick

Yes. He has the size, athletic ability and arm strength to play at the next level. But he needs to stay healthy, develop a quicker release and sharper pocket presence. Lunt could be special. This is a big season for him, in Year Two after transferring from Oklahoma State. Can he make those around him better and take this program to another level? The great QBs do that.

How many games will Iowa win? – Eric