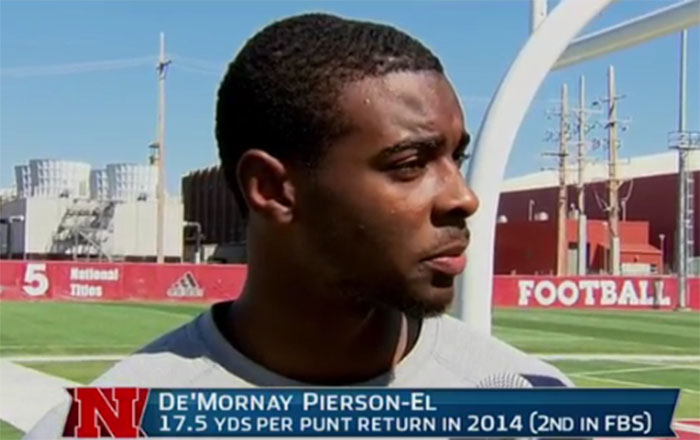 The BTN bus just left Nebraska practice, and now it?s time to share some fun nuggets I gathered while I watched the Cornhuskers practice the last two days.

Former Husker offensive line coach Milt Tenopir was on hand on Tuesday in a scooter as he battles cancer. He built some legendary offensive lines in Lincoln from 1974-2002.

De?Mornay Pierson-El wears three rubber wristbands for inspiration. Two show support for children he has met. The other-a black one-simply reads: ?Prove Them All Wrong.? He is doing just that. He told me his high school coach got it for him. Pierson-El, just a sophomore, is primed to build on a big freshman debut. I asked him who has the best hands on the corps. Pierson-El said he did. As for the strongest in the weight room: He named Taariq Allen, Jordan Westerkamp and Brandon Reilly.

More Pierson-El: He says he will run back punts but isn?t slated to help on kickoff returns unless it?s absolutely necessary.

DC Mark Banker was surprised by the lack of talent at linebacker when he arrived. Low numbers, too. He did tell me he likes the defense up the middle.

Nebraska practiced in full pads for the first time on Tuesday. And, things got intense on occasion, as players jostled, sparred and parried along the sideline after some tackles.

There is no one on the roster who can replace DE Randy Gregory as a pass rusher. Senior Jack Gangwish is a try-hard guy and junior Greg McMullen is more of an anchor than edge rusher at 280 pounds. What does it mean? The staff may have to rely on blitzes to get pressure.

Speaking of defense, it was fairly complex and complicated under the old regime. This new staff has simplified things, which should reducing the thinking and increase the reacting.

Could junior DT Maliek Collins be playing his final season in Lincoln? Perhaps. The guy has a non-stop motor and is often disruptive in the backfield.

See what Nebraska defensive tackle Maliek Collins had to say to BTN Live during the @Huskers training camp. http://t.co/EKLwcBF38v

The passing game has a ways to go from the Pelini era, as most aspects floundered. Drops, passes often weren?t timely or were off the mark. This must change to bring balance to the attack.

A big key to Mike Riley perhaps succeeding immediately is the fact he brought his Oregon State coordinators with him: OC Danny Langsdorf and DC Mark Banker. It is similar to Jerry Kill bringing Matt Limegrover and Tracy Claeys with him to Minnesota.

See what Nebraska head coach Mike Riley had to say to BTN Live during the @Huskers training camp. http://t.co/RBvR9uFckF