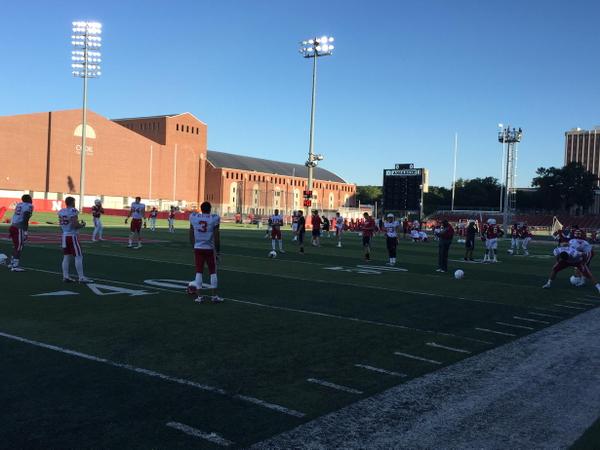 The third stop on our annual summer trek across the Big Ten brought us to Lincoln, Nebraska, where we watched the Cornhuskers practice twice.

Before we turn our attention to Minnesota, which we will watch Friday, here are five things I learned at Nebraska practice Tuesday and Wednesday nights:

1. Lots of nice options at receiver. Junior Jordan Westerkamp, junior Alonzo Moore, sophomore De?Mornay Pierson-El, senior Taariq Allen and senior Sam Burtch didn?t partake on Tuesday due to injury. None of the boo-boos is believed to be serious. In fact, Pierson-El suited up Wednesday night. This squad has some weapons on the perimeter when full loaded. Pierson-El is one of the most dynamic playmakers in the Big Ten, a true go-the-distance talent each time he touches the ball. I also like junior Brandon Reilly, a 6-1, 195-pounder who is a blazer. Could be the next Kenny Bell? Reilly may be the fastest receiver. Junior Lane Hovey (6-4, 205) is another rangy target. There isn?t a more exciting/dynamic true freshman on the roster than 6-0, 185-pound Stanley Morgan Jr. from New Orleans. He probably will figure in the rotation. ?Savage,? is how Pierson-El described Morgan to me. He made several nice plays in the practices we watched. Moore looked good tonight.

2. Is Tommy Armstrong the guy at QB? He has to be. There really are no viable options with experience beyond the junior. Armstrong excels on deep throws. Short throws? Not so much so. And, that?s an issue in Mike Riley?s offense, a pro-style that features myriad shorter tosses. Armstrong was spotty with his accuracy when we watched practice. But don?t expect Riley to do what Bill Callahan did when he took over in Lincoln with Joe Dailey at quarterback. That is: force a round peg into a square hole. Riley seemingly will work around and accentuate the talent on hand, playing to its strengths while folding in elements of his offense. To that end, Armstrong is practicing the zone-read play he is so adept at running.

See what Nebraska QB Tommy Armstrong likes the most about the @Huskers new offense. http://t.co/PBeb2WkvTQ

3. Maliek Collins is the best player on the team. Done. Finished. End of story. The 6-2, 300-pound junior defensive tackle is an unstoppable force on the interior, teaming with fellow junior tackle Vincent Valentine (who has been battling a knee issue) to give Nebraska a great tandem. (Penn State also has a monster duo in Austin Johnson and Anthony Zettel.) Collins moved well the day I watched him, battling a Nebraska offensive line that is very much a work-in-progress. Pencil him in for first-team All-Big Ten honors.

See what Nebraska defensive tackle Maliek Collins had to say to BTN Live during the @Huskers training camp. http://t.co/EKLwcBF38v

4. The o-line has work to do. There are whispers among some program watchers that the big fellas lack toughness. Hmmmm. We shall see. Regardless, the Cornhusker front needs to gel quickly. There is no shortage of bodies and talent. But there really are only two sure things: left tackle Alex Lewis (the best of the bunch) and right guard Chongo Kondolo, who may be special. After that, battles wage. A player who catches your eye is redshirt freshman guard Nick Gates, a 6-5, 290-pounder from Las Vegas. He was a big-time recruit who seemingly has a big future. And, it shows. Junior walk-on Dylan Utter is fighting hard for a guard spot. Don?t discount him. Senior Ryne Reeves could be the guy at center. Senior Givens Price is battling on the interior.

Keep an eye on RFr OL Nick Gates. The kid is gonna be good. @Huskers pic.twitter.com/n2duhe0Fl7

5. RB Mikale Wilbon may be the real deal. The diminutive (5-8, 190) redshirt freshman from Chicago has really come on dating back to the spring. Mike Riley says Wilbon has a developing grasp of the offense. Even better: The guy is just a nifty blazer with some shake, giddy-up and playmaking ability. And that?s needed in a backfield that has lost all-time great Ameer Abdullah. It?s a crowded Nebraska RB corps that appears to be led by junior Terrell Newby. There also is sophomore Adam Taylor and burly senior Imani Cross, whose role appears to be undefined. True freshman Jordan Stevenson shows flashes. He?s the kid who was denied admission to Wisconsin and recently landed in Lincoln. But the 5-9, 205-pound Stevenson needs to get into better shape.

This is not a complete overhaul offensively - a lot of stuff will look very familiar to Neb fans (spread formations, read option, etc)