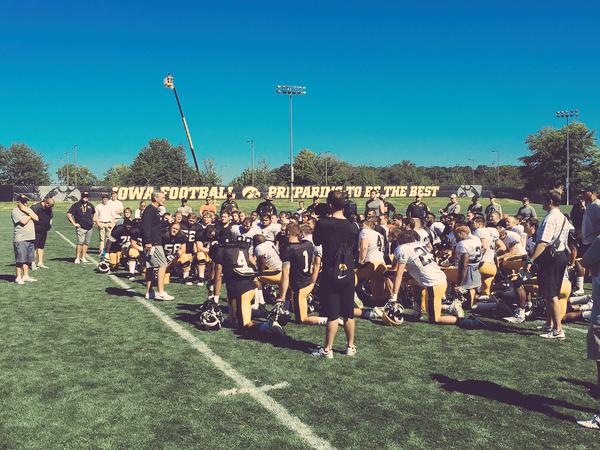 The second stop on our annual summer trek across the Big Ten brought us to Iowa City, Iowa, to watch the Hawkeyes practice.

Before we turn our attention to Nebraska, which we will watch Wednesday night, here are five things I learned at Iowa practice Tuesday morning:

1. C.J. Beathard can throw the ball. Well, I already knew that. But I had never seen him this up close and personal before. The 6-2, 209-pound junior showed a cannon. But he seems to lack touch-and his accuracy could be sharper. Still, Beathard?s confidence is high as he?s the clear No. 1 option with Jake Rudock off to Michigan. No looking over the shoulder or worrying about being pulled because of a mistake. Iowa needs to keep things basic for Beathard as he continues to learn how to make decisions and learn command of the offense. The attack needs to lean on the running game-as usual. Still, Beathard has the arm to go down field often, which Rudock, who typically took the check-down throw, lacked.

2. Where are the playmakers? This attack too often can be labeled ?pedestrian.? A big reason for that? There has been a lack of ?difference makers? in recent years, which has led to the sluggish performance by the team. LeShun Daniels is the No. 1 back, but the junior is not a blazer. At 6-0, 225 pounds, he?s a load inside with some burst. Senior Jordan Canzeri has some zip, as does Akrum Wadley-who may be the fastest back. Former receiver Derrick Mitchell, a sophomore, can scoot a bit. What about receiver? Senior Tevaun Smith is the No. 1 wideout with Kevonte Martin-Manley gone. Junior Matt VandeBerg is savvy. Senior Jacob Hillyer passes the eyeball test at 6-4, 212. Sophomore Jonathan Parker is interesting, too, along with redshirt frosh Jay Scheel. But will defenses fear these guys? Staffers are intrigued by some true freshmen wideouts. Kirk Ferentz told me Adrian Falconer is the furthest along among the new wideouts. C.J. Beathard also told me Emmanuel Ogwo has shown some potential. Don?t be shocked if either or both plays this season, as the offense looks for some juice on the edge.

BTN Bus Tour #Hawkeyes CJ gives them best chance to have explosive plays and create plays which they will need.

3. The linebackers are better. The linebacking corps was in transition last year. And, it showed, especially late in the season when Iowa struggled to defend the perimeter during a late-season melt down. The experience from 2014 should help. This reshuffled group looks better with sophomore Josey Jewell having moved from weak-side to middle linebacker and with sophomore Bo Bower going from outside to weak-side. Sophomore Ben Niemann is strong at outside linebacker.

LB Bo Bower is having a really nice day. Has made plays in pass coverage and in the run gm.

4. Miles Taylor brings it. The defense needed an answer at strong safety. And it seems to have found it in Taylor. The 6-0, 195-pound sophomore has quickly developed a rep for bringing the lumber. RB LeShun Daniels verified for me in a post-practice interview that Taylor is a hitter. In fact, Taylor is the guy who put Daniels in a red jersey for today?s practice. (Daniels is OK after his bell was rung and still worked out.) This could be a very good Hawkeye secondary with senior Jordan Lomax at free safety and juniors Greg Mabin and Desmond King on the corners.

5. Tackles are coming on. Iowa is a program built on punching teams in the nose with a physical run game. Alas, both tackles are new. Boone Myers is a 6-5, 300-pound sophomore at left tackle. Ike Boettger is a 6-6, 300-pound sophomore right tackle. No doubt, they pass the eyeball test, moving well and showing physicality. But are they strong enough? Built for the long haul? They certainly are not battle-tested. But, the potential and athletic skills are there to replace Brandon Scherff and Andrew Donnal.

Two new OTs for @TheIowaHawkeyes are on the spot: 52 Boone Myers and Ike Boettger. pic.twitter.com/LACt8fpO3q