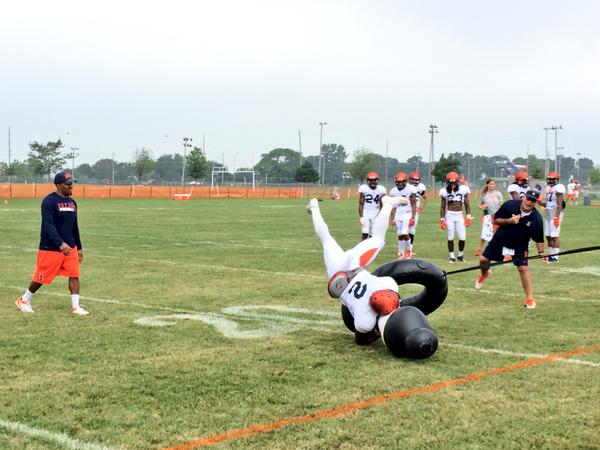 The first stop on our annual summer trek across the Big Ten had us in Rantoul, Illinois, to watch the Illini practice Monday.

Before we turn our attention to Iowa, which we will watch practice Tuesday morning, here are five things I learned at Illinois practice:

1. This finally looks like a Big Ten team. I couldn?t say that the other three times I visited Illinois for training camp on the BTN tour. But Tim Beckman?s squad has improved its size across the board. And depth is better. To wit: the two-deep on the offensive line is workable.

2. The quarterbacks hold the key. Look, this team will only go as far as QB Wes Lunt takes it. Lunt had issues staying healthy last season. And fundamentally was still a work in progress after sitting out following his transfer from Oklahoma State. Lunt didn?t look particularly sharp today; none of the signal-callers did. But Lunt has the requisite skill set to thrive in this QB-friendly offense. I like backup redshirt freshman Chayce Crouch. He?s a good-looking athlete who at 6-4, 225 brings a difference dimension to the table running the read-option. True freshman Jeff George Jr., is coming on, according to the coaches. Some felt he was more of a MAC player than a Big Ten player coming out of high school. But George has impressed and is fighting for the No. 3 spot with fellow freshman Jimmy Fitzgerald.

3. The defense is better. It has to be, right? The unit has been just north of awful-especially vs. the run–during Beckman?s first three seasons in Champaign, ranking 95th, 116th and 115th in the nation vs. the run, respectively, each of the last three seasons. New co-defensive coordinator/d-line coach Mike Phair brings professionalism and intensity to the front. Even better, Phair-who was with the Tampa Bay Buccaneers-has some talent to work with after stepping in for fired Greg Colby. Senior end Jihad Ward is the real deal, a 6-6, 295-pound force off the edge who was dialed in today. Junior Rob Bain is a 305-pound bowling ball who plays with intensity on the inside. He?s fun to watch. Junior Jarrod Clements is a blocky bookend to Bain inside. The key up front will be the LEO spot, a hybrid end/outside linebacker. The unit needs big plays from the position. And, it?s time for juniors Dawuane Smoot and Carroll Phillips to be difference makers on the edge and in space. Smoot ran well today.

Any discussion of @IlliniFootball begins with DE Jihad Ward. He looks already to be in midseason form. pic.twitter.com/d00TOMBtan

4. Left guard is a potential concern. For now, 6-4, 320-pound Chris Boles is running with the ?ones,? but the senior lacks experience. Talented redshirt freshman Nick Allegretti may eventually win out. The other four spots are solid. Right tackle Christian DiLauro is the bellwether and future pro-and he?s just a sophomore. Junior Austin Schmidt looks like a left tackle. Senior Teddy Karras is a solid right guard. Junior Joe Spencer is a steady center. And depth is workable-finally. Still, this group has a lot to prove in the run game, which for too long has lacked punch. It?s time to get tough and physical. This group may be capable.

Word is Chris Boles had a great offseason - has put himself in position to battle for starting spot. Moving well pic.twitter.com/WcFK2qVxXY

5. Running back is dicey. Josh Ferguson is the unquestioned No. 1, but the 5-10, 200-pound senior isn?t a workhorse. In fact, he?s more of a third-down option. The staff needs a No. 2 man and is looking to freshmen Ke?Shawn Vaughn and Reggie Corbin, along with JC Henry Enyenihi, the most physical of the group. Freshman Dre Brown may have been the No. 2 man had he not hurt a knee in the spring causing him to miss this season. Stay tuned. This could be interesting. This rush game needs a boost after ranking 111th in the nation last year (117.5 ypg).