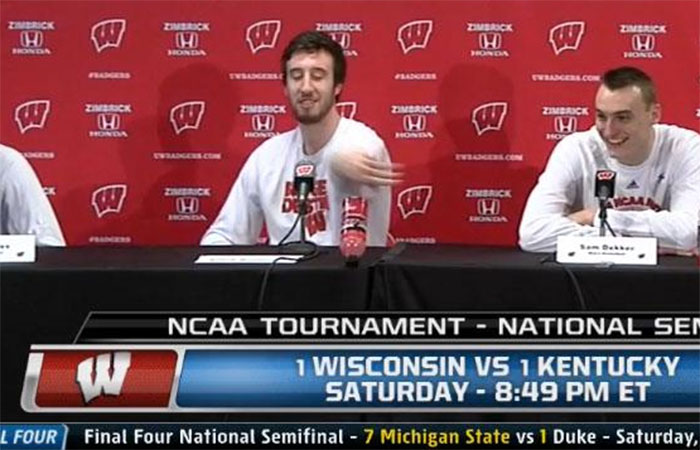 It's no secret that the Wisconsin Badgers are a fun group that is filled with a bunch of engaging personalities.

Media across the nation has learned this during Wisconsin's Final Four run, with the most reported story being Nigel Hayes' affinity for an NCAA tournament stenographer's equipment.

But the Badgers always seem to have fun, let their personalities show and provide colorful answers when they meet the media – even if they "get nothing out of it," as Frank Kaminsky said during Tuesday's press conference.

Speaking of Kaminsky, he had a funny reaction to a question about his FIFA video game skills, one about whether he's still the team's fourth-best player.

Check out the Big Ten Player of the Year's emphatic response, which includes a playful knocking down of his sports drink, in the video above.

Here are a few pictures of the team's reaction.

No surprise: @BadgerMBB is showing its personality during this press conference. pic.twitter.com/hRRf9tYR9Y

Their coach is pretty funny, too.