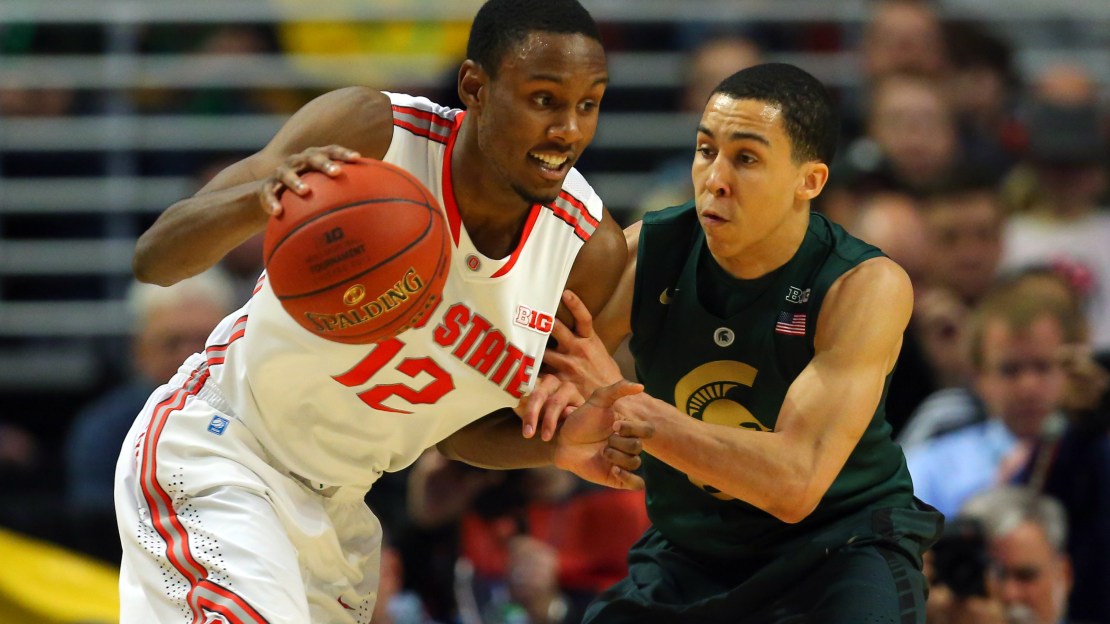 Another week, another chance for Big Ten schools to try to make up ground on first place Wisconsin, which has a three-game lead over its closest competitors. Maybe this will be the week the Badgers slip up. Maybe not.

Regardless, here?s my ranking of this week?s games.

1. Ohio State at Michigan State, Saturday. A big game for teams looking to polish NCAA resumes. The Spartans are just 3-3 in their last six Big Ten games and have lost twice at home in league action. If Michigan State?s free-throw shooting woes persist, it will be hard-pressed to win vs. a surging Buckeyes squad.

2. Indiana at Maryland, Wednesday – BTN (watch on BTN2Go). A nice battle between schools in the hunt for NCAA bids. The Hoosiers dumped the Terrapins earlier this season in Bloomington. Expect a lot of points in this game with a great battle of point guards: Yogi Ferrell vs. Melo Trimble. Defense? It?s not a strong suit for either squad.

3. Wisconsin at Nebraska, Tuesday. Yes, the Huskers have disappointed. Some felt this was going to be one of the four or five best Big Ten teams, but offensive struggles have proven ruinous. Still, a win vs. the Badgers would provide a nice lift. And it could happen, as NU is 5-1 at home in the Big Ten and beat the Badgers in Lincoln last season. Indiana is the only league team to win in Lincoln. Since that loss, Nebraska has won five in a row in Pinnacle Bank Arena.

4. Minnesota at Iowa, Thursday – BTN (watch on BTN2Go). The Hawkeyes won an earlier meeting in Williams Arena, with Jarrod Uthoff hitting a late game-winner to avoid overtime in a game that Iowa held a 17-point lead. Each team has won two in a row. But know this: Minnesota is 0-5 on the road in the Big Ten.

5. Illinois at Wisconsin, Sunday. The Badgers can?t underestimate a Fighting Illini club that is exceeding expectations and fighting for an NCAA bid. And Illinois is doing so without its best player: Rayvonte Rice, who is suspended. This should be a good defensive battle. But how will the Illini contain 7-foot Frank Kaminsky?

6. Michigan at Illinois, Thursday. Two teams seemingly going in opposite directions. The Illini have thrived without first injured/then suspended star Rayvonte Rice, going 6-3 in his absence. The Wolverines haven?t fared so well in the absence of studs like Caris LeVert and Derrick Walton Jr. The season may be slipping away in Ann Arbor.

7. Minnesota at Indiana, Sunday – BTN (watch on BTN2Go). The Hoosiers continue to defy expectations with a high-octane offense that can out score foes. IU is one of three league schools without a conference home loss (Wisconsin and Maryland are the others). The Gophers haven?t won a Big Ten tilt away from the Barn.

8. Michigan State at Northwestern, Tuesday – BTN (watch on BTN2Go). The Spartans needed overtime to beat the Wildcats in East Lansing. Yes, Northwestern is just 1-9 in the Big Ten and hasn't won in 2015, but it has lost myriad close games. NU has lost in overtime, by five points, by two points (twice), by a point and by eight points. Be careful, Michigan State.

9. Maryland at Penn State, Saturday – BTN (watch on BTN2Go). This is a must-win for the Terps if they want to stay in the Big Ten hunt. Maryland has won at Michigan State and Purdue. The Nittany Lions are 3-2 at home in Big Ten games-beating Rutgers, Minnesota and Nebraska. And PSU should have beaten Purdue but fell in overtime at Bryce-Jordan in a miraculous Boilermakers? victory.

10. Nebraska at Purdue, Sunday – BTN (watch on BTN2Go). Neither team is blessed with great offensive talent. The Boilermakers? size-along with the home-court edge-may be enough to squeeze out another win vs. an underachieving Cornhuskers? club. Maryland is the lone Big Ten team to win in Mackey Arena this season.

11. Iowa at Northwestern, Sunday – BTN (watch on BTN2Go). The Wildcats are the only Big Ten team without a league home win (0-4). Can NU score enough to beat the Hawkeyes?

12. Penn State at Ohio State, Wednesday – BTN (watch on BTN2Go). The Buckeyes are too good to blow this one. And Thad Matta surely will remind OSU that the Nittany Lions beat the Buckeyes twice last season. Expect a beat-down.

13. Purdue at Rutgers, Thursday. Road wins are precious. The Boilermakers have two Big Ten victories away from home. They have to win this one to keep faint NCAA hopes afloat. The Scarlet Knights, for what it's worth, have lost seven straight since its upset over Wisconsin.