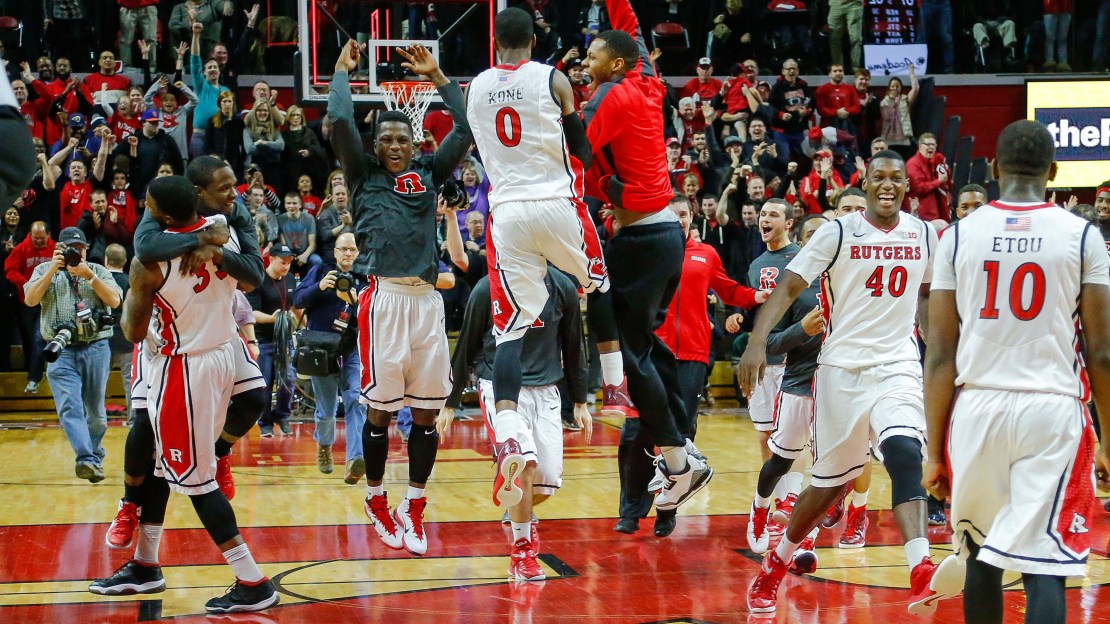 Two weeks of Big Ten play are in the books, and the standings are a lot more jumbled than most expected at this point.

Much of the mess is the result of Rutgers' upset of No. 4 Wisconsin on Sunday night. Not only did the Badgers suffer their first loss, but they are now tied with Maryland, Michigan and Michigan State atop the standings, just one-half game ahead of Indiana and Iowa and one game ahead of Nebraska, Ohio State, Purdue and Rutgers.

Now, to be fair, such a narrow gap is not all that rare four games in. There's still plenty of games left to be played, and there's certain to be more clarity in the coming weeks.

Here's a look back at some of the best from the second week of the Big Ten season.

Rutgers' shocking win over No. 4 Wisconsin on Sunday marked its biggest upset ever, the previous being a 1982 win over No. 6 West Virginia.

Michigan's Ricky Doyle is shooting an eye-popping 72.7 percent (16-of-22) in four conference games.

D'Angelo Russell scored 25 (!) of his 27 points in the first half of Ohio State's overtime win at Minnesota.

Through four conference games, Melo Trimble has made just four fewer free throws (32) than Nebraska in the same number of games.

Rutgers' Kadeem Jack, who entered Sunday night shooting 37.5 percent from the field, shot 8-of-13 vs. No. 4 Wisconsin, good enough for a season's best 62 percent, raising his field goal percentage 1.7 percent.

Avery Harriman, the 7-year-old son of Nebraska assistant Chris Harriman, recently learned his leukemia remains in remission. That's excellent news. Avery attended Sunday night's victory over Illinois, sitting in the front row, and he celebrated the win in the locker room and joined the Huskers on the podium for the postgame press conference.

Troy Williams was a monster in Indiana's win over Ohio State, and he displayed his all-around game and athleticism on this impressive sequence, in which he threw down a double-pump fake on one end and swatted a shot on the other.

"One thing we have to work on is, we have to learn how to rush the court when you have a big win like that. It wasn't impactful enough." – Eddie Jordan, to open postgame press conference after upsetting No. 4 Wisconsin.

Indiana vs. No. 22 Ohio State. Five days after the Hoosiers lost by 20 points at Michigan State, they took down the Buckeyes, 69-66, behind Troy Williams' 15-poiont, 12-rebound effort. Speaking of bounceback efforts, Williams' double-double came on the heels of a forgettable scoreless game at Michigan State.