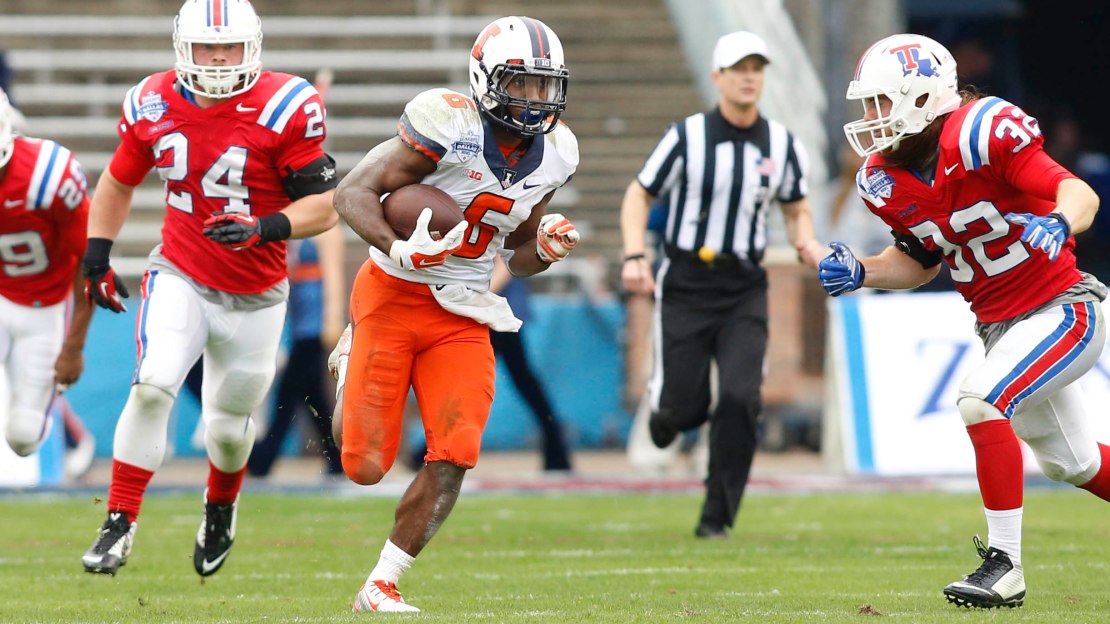 Yes, Illinois lost the Zaxby?s Heart of Dallas Bowl vs. Louisiana Tech to finish 6-7. Still, reaching a bowl for the first time since 2011 is progress for a program in its third season under Tim Beckman.

Still, this loss stings. Louisiana Tech is a C-USA school. And making matters worse, former Illini DE Houston Bates registered four sacks against his ex-team. Plus, the Bulldogs were quarterbacked by Iowa transfer Cody Sokol, who hit 14-of-28 passes for 247 yards with a TD to slow the mojo of an Illinois team that won its last two games to get bowl eligible.

Best play: Trailing 14-9 in the second quarter and with the ball at the Tech 49-yard line, Illinois QB Reilly O?Toole was intercepted by Xavier Woods, who made a nice 69-yard run through Illinois defenders for a TD that gave the Bulldogs a 21-9 edge.

Best player: QB Reilly O?Toole did all he could in making his second start in a succession. The senior hit 24-of-39 passes for 295 yards with a touchdown and pick. He also ran 18 times, leaving it all out on the field in his final game as an Illini.

Best moment: There weren?t many for Illinois. RB Donovonn Young capped a nine-play, 72-yard drive with a three-yard TD run in the third quarter to cut Louisiana Tech?s lead to 21-15. That would be as close as the Illini would get.

Offense: B+ The offense moved the ball up and down the field all day vs. the Bulldogs, notching 450 yards. But the Illini struggled to finish drives, going 3-of-15 on third downs. O?Toole had a good game. Illinois was hurt by two turnovers-one ran back 69 yards for a TD in the second quarter-and nine penalties for 68 yards.

Defense: B The unit played well, allowing 361 yards after entering the game last in the Big Ten in total defense (464.3 ypg). But it was hurt by a few big plays. Louisiana Tech scored on an 80-yard pass in the first quarter, and a 70-yard pass set up a short fourth-quarter touchdown run. A Blake Martin 28-yard touchdown run with 3:43 to go iced it at 35-18.

Special team: D Not a really good effort. The Illini missed field goals from 42 and 46 yards. Plus, Illinois missed a PAT. David Reisner banged a 43-yard FG off an upright to make it 21-18 with 14:01 left in the game. But that was as close Illinois would get.

It was over when: La Tech led 21-18 and faced a third-and-13 at its own 45-yard line. Bulldog QB Cody Sokol was sacked by LaKeith Walls and fumbled. Illini DE Jihad Ward picked up the ball and ran 19 yards before getting hit and fumbling. Sokol recovered at the 16. La Tech had a first down and subsequently scored a TD to push its lead to 28-18 with less than seven minutes left in the game.

A look toward 2015: Illinois can build off its first bowl since 2011, with Tim Beckman back for this fourth season next year. The offense should continue to play well, as QB Wes Lunt figures to be improved working with WR Mike Dudek and RB Josh Ferguson, among other weapons. The key will be better play from the line and a more steady rushing attack. The biggest key will be a defense that will return the likes of DE Jihad Ward, LBs. T.J. Neal and Mason Monheim and CB V?Angelo Bentley among others. If it?s better, the Illini should move up the food chain in the Big Ten West.