Ohio State season review: What a year for the Big Ten champions! 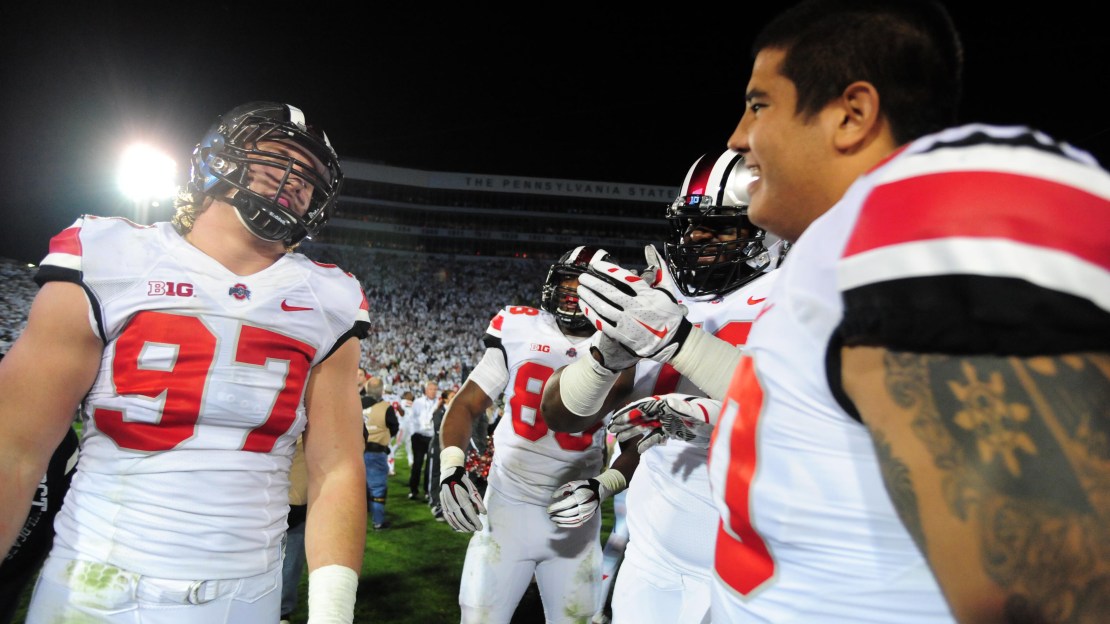 Ohio State continues to roll under Urban Meyer, who in three seasons in Columbus has a 36-3 overall record and a 24-0 Big Ten mark (he did lose the 2013 Big Ten title game to Michigan State).

This has been Meyer?s best season yet, as the Buckeyes won the program?s first Big Ten title since 2009 and are seeded No. 4 in the inaugural college football playoff and will take on No. 1 Alabama in the Sugar Bowl.

Ohio State has been dominant on both sides of the ball. But the offense has been a cut-above, ranking No. 1 in scoring (45.2 ppg) and No. 1 overall (507.6 ypg) behind coordinator Tom Herman, who was hired by Houston as head coach.

High point: When you win 12 games, there are a lot of high points. But none were higher than the 59-0 victory vs. Wisconsin in the Big Ten title game on Dec. 6 in Indianapolis. The Buckeyes were an underdog to the No. 13 Badgers with QB Cardale Jones making his first career start. No worries. Jones delivered a performance for the ages in notching game MVP honors by completing 12-of-17 passes for 257 yards with three touchdowns taking over for J.T. Barrett, who was lost the game before vs. Michigan with a season-ending broken right ankle.

Low point: The Buckeyes looked ordinary in losing 35-21 to visiting Virginia Tech on Sept. 6 in the second game of the season. QB J.T. Barrett looked like a redshirt freshman making his second start in place of QB Braxton Miller, who suffered a season-ending shoulder injury in training camp. Barrett hit just 9-of-29 passes for 219 yards with a touchdown and three picks while being sacked seven times by a Hokies? team that lost at home to East Carolina the next week and finished 6-6. It was Ohio State's third loss in its last four games after a school-record 24-game winning streak. How good were the Buckeyes?

Offensive MVP: QB J.T. Barrett exceeded everyone?s expectations by being voted the Big Ten Quarterback of the Year. The redshirt freshman led the league in passing efficiency, hitting 64 percent of his passes for 2,834 yards with a conference-high 34 touchdown and 10 interceptions. Barrett also finished ninth in the Big Ten in rushing (78.2 ypg), rushing 171 times for 938 yards and 11 TDs before seeing his season end with a broken ankle vs. Michigan on Nov. 29.

Defensive MVP: E Joey Bosa was dominant all season in being named a unanimous All-American and the Big Ten Defensive Player of the Year as a sophomore. Bosa paced the league in sacks (13.5) and tackles for loss (20.0). His game-ending sack of Penn State QB Christian Hackenberg in a 31-24 double overtime victory in State College, Pa., on Oct. 25 was his signature play of 2014 and encapsulated his impact all season.