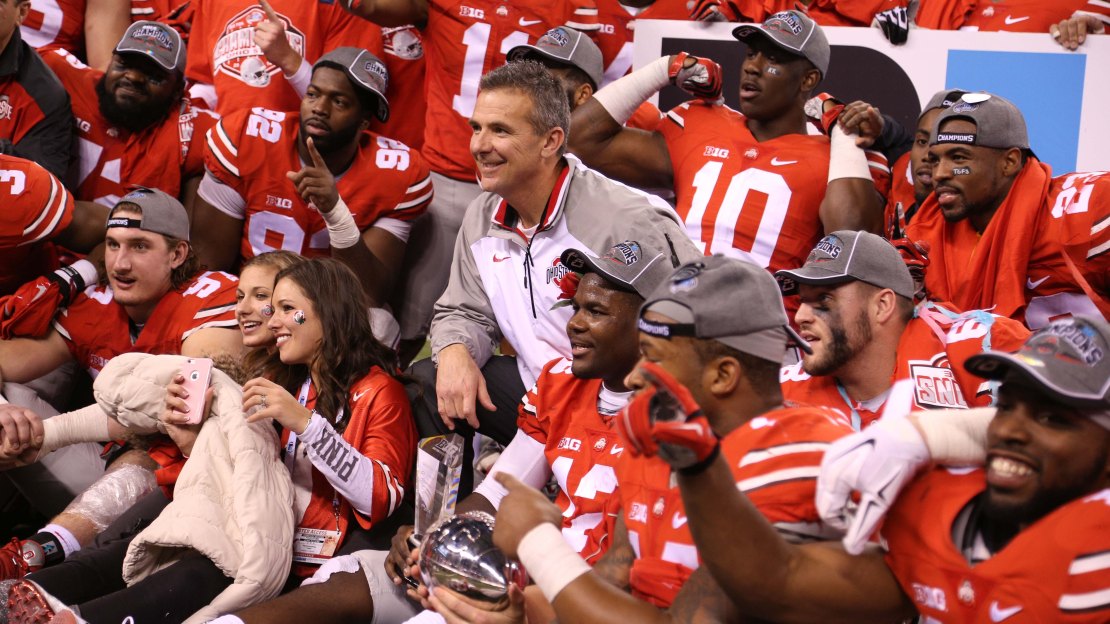 It's time to reach into my mailbag and answer your questions. How about those Buckeyes!? And what is Michigan gonna do with its job opening?

So what happens at quarterback next year if somehow Ohio State wins the national championship with Cardale Jones under center? The Buckeyes will have Jones back along with Braxton Miller and J.T. Barrett. – Dustyn

That would be something, huh? What an embarrassment of riches at quarterback for the Buckeyes, with OSU being able to cruise to victory in the Big Ten title game with third-stringer Jones at the helm. I still think J.T. Barrett is the guy at quarterback for the Buckeyes to start 2015 over Braxton Miller and Jones, no matter what he does the rest of the way this season. Barrett has shown too much potential not to be No. 1 when camp opens next season. The biggest question is what will happen to Miller. He says he?s coming back. But, we shall see. He could graduate and transfer to another FBS school and be immediately eligible. Or, he could play right away at a FCS school. It?s gonna be interesting to see how this all sorts out for Miller.

Now that the ink is dry on the bowl game contracts, how many do you see us winning? I can see us going 4-6. That is if we split what I consider to be the close ones. I'm sure in the vast majority of the BIG's games, we will be underdogs. It doesn?t help when Alabama, Baylor and USC are basically playing home games. – Rick

I have not had a chance to scrutinize all of the games. But someone told me Vegas has the Big Ten as an underdog in all 10 bowls! Wow. The ones the league will be judged on the most will be the Sugar (Ohio State-Alabama); Cotton (Michigan State-Baylor); Outback (Wisconsin-Auburn); Citrus (Minnesota-Missouri); TaxSlayer (Iowa-Tennessee) and Holiday (Nebraska-USC). If the Big Ten can split those six games, it will be OK. This is the time of year when conferences forge their reputations. The opportunity is there for the Big Ten.

Will Michigan surprise the fans with its next head coach hire? – Larry

It?s difficult to get a good read on what Michigan is thinking. The school needs to address its athletic director spot, too. How will that impact the coaching search? Many names already have been circulated about who Michigan could hire. Names like Jim Harbaugh, Les Miles, Dan Mullen and Greg Schiano have been mentioned. I think Michigan needs to hire a proven head coach with an offensive background. Most feel Harbaugh isn?t leaving the NFL and that Miles isn?t the mix, with some saying he is telling his LSU recruits he is committed to the Tigers. There also are reports that Mississippi State A.D. Scott Stricklin is working on an extension for Mullen. Tennessee coach Butch Jones, a Michigan native and thought to be a target, recently got an extension in Knoxville. Bottom line: This is going to be interesting.

If Maryland had not lost on last-minute field goals to WVU and Rutgers and finished 9-3, what bowl do you think it would have played in? – Bob Merryman

Yes, the Terps were so close to finishing 9-3. Had it happened, I think Maryland would have landed in the Citrus or Holiday bowls playing a team like Missouri or USC. That would have been fun! Randy Edsall has the program in good shape, as he steered the Terps to a third-place finish in the East. Not bad for the school?s Big Ten debut.

Why did the selection committee put Mississippi State ahead of Michigan State in the final poll? – Don Bennett

It?s a mystery of the universe. Neither team played last week, yet Mississippi State was moved to No. 7, and the Spartans slid to No. 8. The week before, the Spartans were No. 8 and the Bulldogs were No. 10. The past answer to difficult questions for committee chair Jeff Long is to say: ?We start fresh each week.? Fair enough, but nothing changed in a week for either team. In the grand scheme of life, it really doesn?t matter. Each team is still going to a big bowl (Mississippi State to Orange and Michigan State to Cotton). The vexing flip did allow the Big Ten to have enough bowl slots for its teams-which wouldn?t have been the case had the Spartans gone to the Orange. So, I think that?s your answer as to why this curious poll flip took place.

Maryland vs. Stanford in the Foster Farms Bowl to me is the most interesting matchup of the non-championship games. I see a close and competitive game between the teams. – Jeff Gott

You may be correct. That looks like an interesting tilt. I love both coaching staffs, with Randy Edsall at Maryland and David Shaw at Stanford. These are two good ones whose teams always are prepared.

What do you get when you mix an Urban Meyer offense with a Jim Tressel defense? Answer: dominant victory!!!! – Tim Young

That was an impressive effort by the Buckeyes on Saturday night! OSU notched 558 yards and allowed just 258 in crushing Wisconsin, 59-0, in the Big Ten title game. Cardale Jones was outstanding in his first career start, hitting 12-of-17 passes for 257 yards and three touchdowns vs. a Badger defense that was among the best in the nation statistically. And the defense limited Melvin Gordon to 76 yards on 26 carries, 2.9 yards per carry with a long run of 13 yards. Very impressive.