No moment too big for Cardale Jones, the backup to the backup 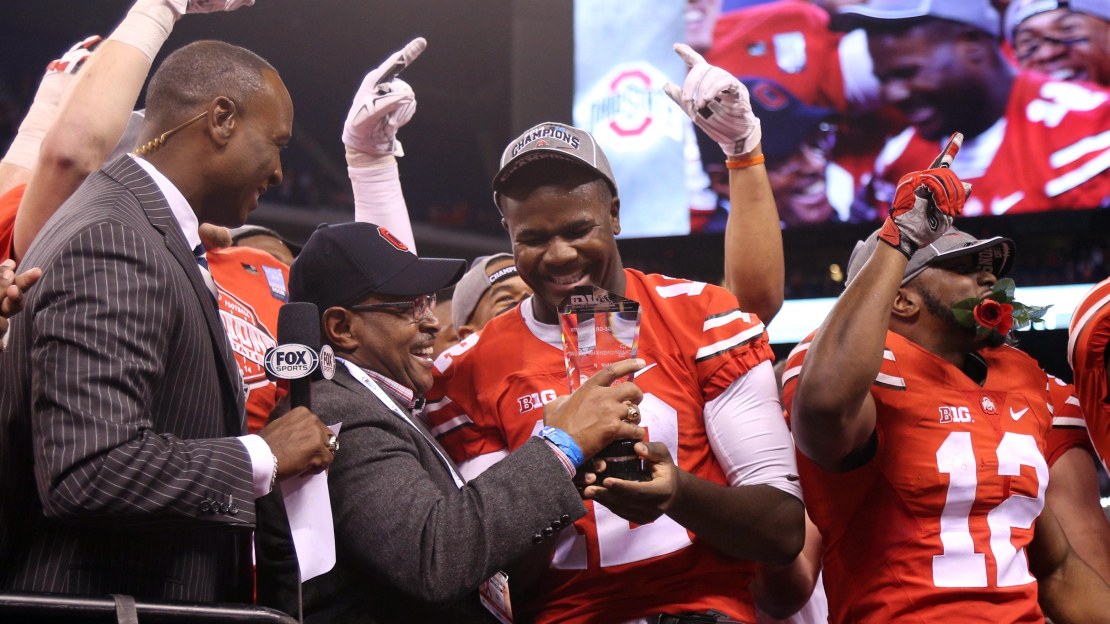 INDIANAPOLIS — The ball zipped through the air, Wisconsin defensive backs tried for it, and Ohio State wide receivers grabbed it. Another throw, same result. It was that kind of night for Cardale Jones and Ohio State.

As time passed, Ohio State's College Football Playoff resume continued to grow and grow, until the clock hit 0:00 and the final scoreboard read 59-0 in favor of the Buckeyes.

The biggest story leading up to Saturday's Big Ten championship game was how would Jones handle the pressure of making his first career start in the biggest game of the season? The answer: Just fine. In fact, better than just fine. Jones played as if he had ice water running through his veins as no throw, no run, nothing was too big for a guy who was Ohio State's backup just one week ago.

This was more than a victory, folks; this was one of the most dominant performances college football fans have seen this season. This wasn't just the largest margin of victory in the four years of the Big Ten title game, it was the first shutout in the history of the Power 5 conference championship games. And how fitting that it came in the biggest game of the season.

After a tumultuous week that was filled with plenty of emotion, Ohio State disposed of Wisconsin faster than you could say, "Where do I buy College Football Playoff tickets?" Jones and the Buckeyes offense gashed the Badgers for 558 yards, 266 of which Jones was responsible for. This against the No. 2-ranked defense in the nation.

Right from the start, the Buckeyes seemed ready to pounce on the Badgers. And player after player stepped up big on the Big Ten's biggest stage.

"There's no doubt, I was confident coming into this game," Jones said. "But my teammates and my coaches took my confidence to a whole new level that I've never felt before."

Here's the first of three touchdowns to Smith.

"There was nothing he did today that surprised me, because I knew exactly what he's capable of doing," Smith said. "He was able to throw it up there and I just went up and got it? I guess we were just in the zone."

In the zone they were. But did anyone really see this coming?

"We did," said Ohio State running back Ezekiel Elliott, after he was asked the question following the game. "We knew we wanted to come out and show the world what kind of team we are. We're a team that doesn't back down from anything."

Elliott did his part, too, rushing for 220 yards, which set the Big Ten title game record.

The Buckeyes are where many predicted them to be heading into the season, but that was with Braxton Miller under center.

The Buckeyes are where many expected them to be just two weeks ago, but that was with J.T. Barrett under center.

Now, the Buckeyes are there, Big Ten champions, and it was their backup to the backup who just led them to one of the most dominant performances we have seen in some time. Saturday was an explanation point to a season that started off slow, but ended with quite a bang.

As Jones celebrated with his teammates following the win, Ohio State coach Urban Meyer came up to his quarterback and gave him one of those hugs that are worth a million words.

"He's a special player," Meyer said. "One of the most improved players I've ever been around."

Meyer never questioned his confidence in Jones' ability heading into this game.