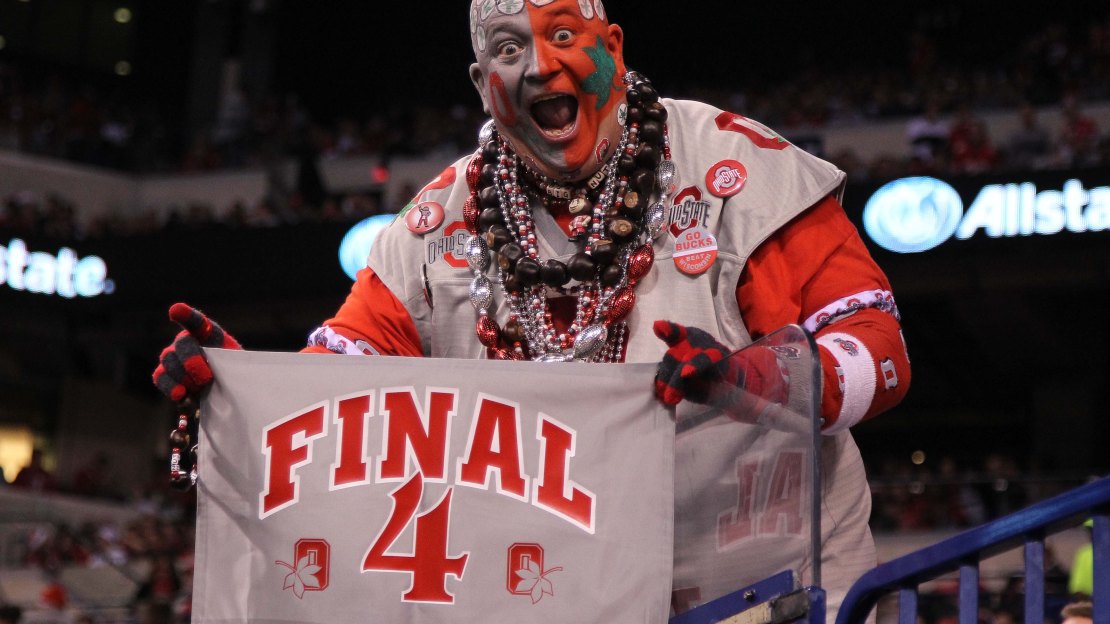 INDIANAPOLIS — Now we wait and wonder: Did Ohio State do enough to earn a golden ticket to the College Football Playoff?

The No. 5 Buckeyes stated their case loud and clear with a 59-0 demolition of No. 14 Wisconsin in the Big Ten title game Saturday night at Lucas Oil Stadium.

Look at OSU?s resume: wins over No. 8 Michigan State, No. 25 Minnesota and the Badgers, who rode a seven-game winning streak into Indy.

The Buckeyes also can call themselves a champion. And, when it comes to the eyeball test, Ohio State passes with flying colors, often winning in dominating fashion in 2014.

Check out some of these scores:

And on it has gone including tonight?s crushing of the Badgers, as the Buckeyes seemingly saved their best for last. And, their timing was perfect, as this was the type of closing argument OSU needed to make to the CFP committee. The Buckeyes showed that even without J.T. Barrett, who was lost for the season with a broken right ankle last week vs. Michigan, they still are an elite team of playoff-caliber-even with a quarterback who was making his first career starter after starting the year third string.

Jones was supposed to buckle. Jones was supposed the break. It didn?t happen. He came out and hit his first three passes on the opening drive with his final heave going for a 39-yard scoring strike to Devin Smith. Jones never looked back. And the rout was on.

Now, the waiting begins. Will the Buckeyes be included in the playoff when the field is announced Sunday? The Buckeyes were No. 5 in the CFP poll last week. Alabama was No. 1; Oregon was No. 2; TCU was No. 3; Florida State was No. 4. Baylor was No. 6.

Jim Delany is convinced Ohio State should be in.

No. 4 Florida State also has to be in, right? It may not knock the socks off of anyone, but the Seminoles notched their 29th win in a row with a 37-35 victory vs. No. 11 Georgia Tech in the ACC title game. FSU is the only unbeaten team in the FBS ranks.

That leaves one spot with Ohio State, Baylor and TCU seemingly fighting for it.

Baylor capped it season with a strong 38-27 win vs. No. 9 Kansas State today to earn the Big 12 championship. The Bears? only defeat was at unranked West Virginia, 41-27.

Then there is Ohio State, which certainly has been impressive since its confounding 35-21 loss at home to unranked Virginia Tech on Sept. 6. The Hokies finished the season 6-6. No team in contention for a playoff spot has as ugly a loss. But since then, the Buckeyes have ripped off 11 wins in a row-often in dominating fashion.

First, let?s eliminate TCU since the Horned Frogs lost the tiebreaker to win the Big 12 with Baylor based on their loss to the Bears.

Baylor? Like Ohio State, BU is a conference champ. And the Bears have three big wins vs. No. 9 TCU; No. 15 Oklahoma; No. 9 Kansas State. There also are wins vs. bowl-eligible teams in Texas, WVU and Oklahoma State.

Bottom line: It?s gonna be a close call between Ohio State and Baylor for the final playoff spot.

A big difference between Baylor and Ohio State? That ugly OSU loss to the Hokies. BU has no such defeat, and it plays in a league (Big 12) that?s arguably better than the Big Ten.

Regardless of what happens to OSU, this has been a special season. This was the Buckeyes? first Big Ten title since 2009. And it was an emphatic demolition of a previously hot team that boasted a defense that was No. 1 in the Big Ten overall (260.3 ypg) and No. 1 in scoring (16.8 ppg). The Buckeyes had 224 yards and 14 points after one quarter.

Ohio State shredded the Wisconsin defense all night, jetting to a 38-0 halftime lead and never looking back. The Buckeyes finished with 558 yards with 301 coming on the ground and 257 through the air.

Ezekiel Elliott continues to blossom into a top-flight running back, running 20 times for a career-high 220 yards with two scores. It was his fourth 100-yard effort in the last five games. OSU wideout Devin Smith also excelled with four catches for 137 yards and four TDs for a team that is 36-3 in the last three years with just one loss to a Big Ten club-in last year?s league title game to Michigan State.

Credit the Buckeye defense, too, which limited the Badgers to 258 yards in pitching the shutout. Any hope Melvin Gordon had of winning the Heisman was flushed on this night. He was held in check, running 26 times for 76 yards, averaging 2.9 yards per carry with a long run of 13 yards. Oregon quarterback Marcus Mariota likely locked up the bronze bauble with his effort on Friday night vs. Arizona, when he threw for 313 yards and two scores.

But this night belonged to Jones.

Entering this game, many fretted that Jones wasn?t ready to face a Wisconsin defense that was among the best in the Big Ten and would surely force Jones to make turnovers and mistakes. The Badgers had an attacking 3-4 scheme that could morph formations and come at opponents from different angles. Turns out, Wisconsin?s vaunted defense was no match for Jones.