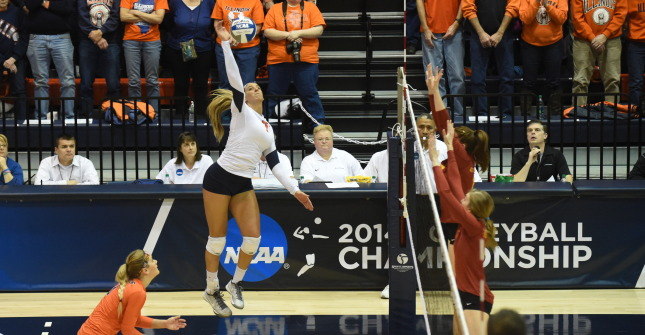 Three of the teams (Ohio State, Penn State and Wisconsin) are all in one region. In fact, the Badgers and Buckeyes face off for a berth in the Elite Eight.

Catch up on all of the action below.

ILLINOIS 3, IOWA STATE 0 RECAP
The #9-seed Fighting Illini punched their ticket to NCAA Regionals for the fifth time in six years with a dominating performance against Iowa State in the second round of the 2014 NCAA Tournament. Junior outside hitter Jocelynn Birks was nearly unstoppable, crushing 23 kills.

NEBRASKA 3, UTAH RECAP
The 14th-seeded Nebraska volleyball team outlasted a tough Utah squad in a five-set thriller Saturday night at the Devaney Center to advance to an NCAA Regional for the 20th time in 21 seasons.

WISCONSIN 3, ILLINOIS STATE 0 RECAP
It was an extra sweet victory for the Wisconsin volleyball team Friday night in the UW Field House. The fourth-seeded Badgers swept Illinois State 25-17, 25-19, 25-19 at home to clinch a spot in the Sweet 16.