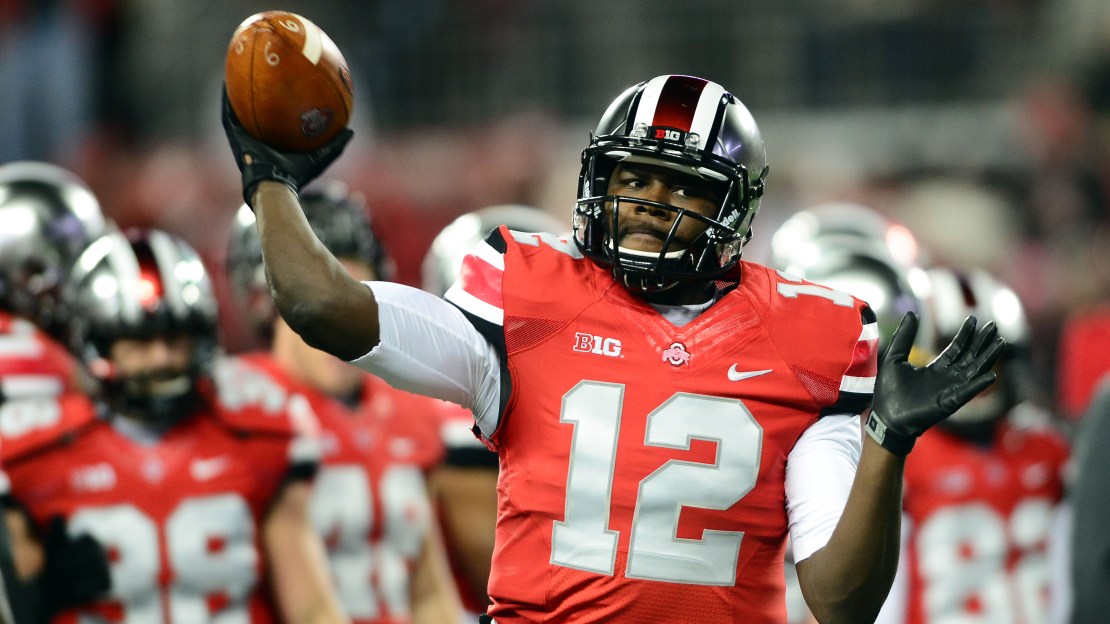 INDIANAPOLIS — It?s always gets back to the quarterbacks, doesn?t it? Yours plays well, your team wins. It often is just that simple.

All eyes this Saturday night in Lucas Oil Stadium in Indianapolis will be on the clash between Wisconsin?s Joel Stave/Tanner McEvoy and Ohio State?s Cardale Jones. It won?t conjure images of Brady vs. Manning. Still, the signal-callers in the 2014 Big Ten title game still will be the keys to victory for their respective teams.

Play within the system.

Stave?s story is a made-for-TV movie. He began the season mentally paralyzed with a case of the ?yips? that prevented him from making even the most routine pass. How bad was it? Stave didn?t even play in the first four games. But the junior has slowly regained his mojo and is coming into the Big Ten title game playing well.

Check this out: In his last four games, Stave has completed 48-of-72 passes (66.7 percent) for 619 yards and five touchdowns against just one interception. That translates into a pass-efficiency mark of 159.02. Stave ranked fourth in the conference in pass efficiency during league play.

Want more? Since taking over as the Badgers? starter vs. Illinois on Oct. 11, Stave has completed 60.7 percent of his passes for 928 yards, 7 TDs and 1 interception for a pass-efficiency rating of 145.3.

This arguably will be the best defense Stave will have faced all season. And the Buckeye D most assuredly will be stacked to stop the running of Melvin Gordon. That will be Stave?s cue to take some shots down field to loosen an Ohio State club that is No. 5 in the Big Ten in total defense (333.8 ypg).

Stave is part of a two-quarterback system that coordinator Andy Ludwig has deftly managed. The setup could have been catastrophic. But, it has worked smoothly, with McEvoy being the yin (runner) to Stave?s yang (passing).

?They have both done some special things for us,? Andersen said. ?Joel continues to get back and improve, and we quickly saw that we had an opportunity to be very different on offense with two quarterbacks. You can see it has helped us. Without (the system), I don?t believe we?re sitting here having this conversation today if both of those men hadn?t been able to compete and make big plays for us.?

McEvoy, who started the first four games, and Stave have combined to complete 60.9 percent of their passes for 144.0 yards per game, 7 touchdowns and 2 interceptions. In addition, McEvoy has rushed for 288 yards on just 31 attempts (9.3 average) and scored four rushing TDs.

In the seven games UW has used its two-QB system, the Badgers have averaged 40.0 points and 482.7 total yards per game.

?Without Tanner or Joel, there really would?ve been some tough games this year,? said running back Melvin Gordon earlier this week. ?We?re definitely going to need them both this next game against Ohio State. Most teams don?t like going with two quarterbacks, but it helps us.?

Ohio State?s situation at quarterback is murkier. Much murkier, since J.T. Barrett suffered a season-ending broken ankle vs. Michigan last week. That has forced Jones into a white-hot spotlight.

Jones comes into the Lucas Oil Stadium as an unknown commodity. He hit 1-of-2 passes for 3 yards last year and rushed 17 times for 128 yards and a TD. This season, Jones has completed 10-of-17 attempts for 118 yards with two touchdowns and rushed 26 times for 206 yards.

"He's a big dude. Big and pretty fast for that size," offensive coordinator Tom Herman said Monday. "He probably doesn't have the same short=range change of direction that J.T. does. But he has long-range speed and the ability to kind of open it up in stride, He's pretty fast."

Jones has played in seven games this season, with his best outing being vs. Illinois, when he hit 5-of-9 passes for 82 yards and two touchdowns and rushed seven times for 47 yards in a 55-14 win vs. the Fighting Illini. Wisconsin certainly will be a monster step up in completion, as the Badgers are No. 2 in the nation in total defense (260.3 ypg).

"I'm very confident," Barrett said Wednesday. "I was learning on the fly, and it was fast for myself. But his is going to have to be even faster, as far as learning and catching up to game reps and what they're like. But there's not a lack of confidence at all."

Ohio State has a wild card in H-back Jalin Marshall, a high school quarterback who lines up under center in Wildcat formations. Look for him to do so 10-15 times on Saturday night to take advantage of his athletic ability.

Still, if Ohio State is going to win this game, Jones will need to play well.

"He's as athletic and has a much stronger arm (than Barrett)," Meyer said. "He's got a cannon for an arm."

Play within the system.

It sounds so simple–yet can be so difficult for these underrated and understated quarterbacks who will be so key.