What did Tom Dienhart learn about Big Ten in Week 14? Here's what! 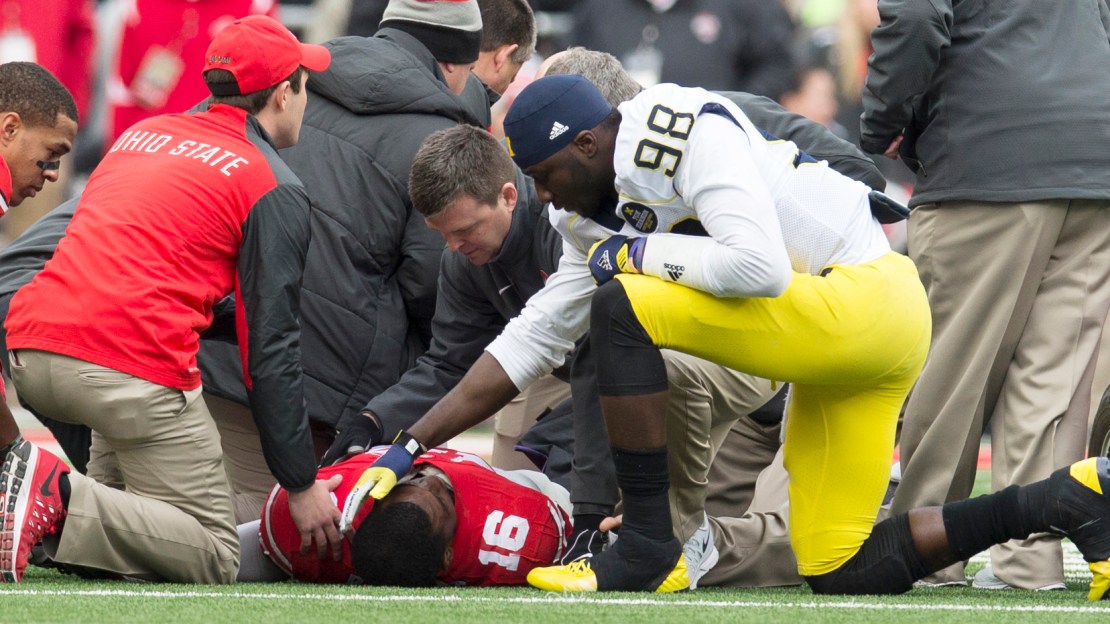 Can you believe the regular season is over? That was a fast season, and now we're headed to the Big Ten title game, a matchup that will pit Big Ten West champ Wisconsin vs. Big Ten East champ Ohio State.

Before we put all of our focus on the title game though, let's take a look at what I learned in Week 14.

1. Ohio State may be OK without quarterback J.T. Barrett. The Buckeyes are without their star redshirt freshman after a broken right ankle in the fourth quarter vs. Michigan. No doubt, this Buckeye offense isn?t the same without Barrett. But, just as some felt OSU was in trouble when Braxton Miller went out with a season-ending shoulder injury in August, the Buckeyes responded with Barrett. Now, OSU may not skip a beat again with another new quarterback stepping in: Cardale Jones. At 6-5, 250, he looks more like a linebacker than quarterback. And the sophomore lacks the dynamic ability of Barrett but still can be effective as a passer and runner. Also, look for h-back Jalin Marshall to take more direct snaps in a Wildcat scheme.

3. I think Wisconsin?s Melvin Gordon will break Barry Sanders? FBS single-season rushing record. The number is 2,628 yards, set in 1988, and Gordon has 2,260 yards rushing, which gives him the Big Ten single-season record. Gordon needs 369 yards the next two games to pass Sanders, needing to average 184.5 yards rushing to earn the mark. Gordon entered Saturday averaging 191.7 yards rushing. As a comparison, Sanders averaged 238.9 yards in 11 games. Gordon will play Ohio State next week, and then a bowl foe. Get ready for history, folks.

4. Michigan State continues to roll. The win at Penn State gives the Spartans at least 10 victories in four of the last five seasons. But, the 2014 campaign likely will go down as a ?what if? year for MSU, which dropped its two biggest games of the season: at Oregon and vs. Ohio State. Still, this is one of the top 10 teams in America and deserves to go to a New Year?s Day Bowl.

5. Rutgers can hold its head high. Many felt the Scarlet Knights were headed to finish in the basement. But RU?s stunning 41-38 comeback win at Maryland gave the Scarlet Knights a 7-5 record overall and 3-5 in the Big Ten. And, honestly, RU had no bad losses, though a case could be made the 13-10 home defeat to Penn State was bad. Bottom line: Rutgers more than held its own in its Big Ten debut.

6. All eyes are on Michigan interim A.D. Jim Hackett. What will his decision be on Brady Hoke? The Wolverines? season-ending loss at Ohio State clinched a losing campaign for Michigan, marking the first time since the 2007 and 2008 seasons in which the Wolverines will miss the postseason. Hoke is 6-10 in the Big Ten the last two years (4-9 in the last 13 league games). And he didn?t have any victories vs. FBS teams that finished with winning records in a dreary 5-7 season.

7. No one can deny Nebraska?s heart after what it overcame on the road at Iowa. The Cornhuskers were down to their third-team center, backup right offensive tackle and had a dinged quarterback in Tommy Armstrong. And the defense was without star end Randy Gregory. Still, the Huskers rallied from a 24-7 third quarter deficit to beat the Hawkeyes and get to nine wins for the seventh season in a row under Bo Pelini, who was fired Sunday morning.

8. Illinois has life thanks to quarterback Reilly O?Toole. It was impressive to see how the Fighting Illini finished the regular season with a burst to become bowl eligible for the first time since 2011. Big props to O?Toole, who took over for a floundering Wes Lunt last week vs. Penn State and delivered a win. He proceeded to lead Illinois to victory in Evanston on Saturday for the first time since 2002. The last two games, O?Toole has hit 35-of-53 passes for 304 yards with four TDs and a pick.

9. If Minnesota hasn?t arrived, it is on the doorstep of big things. It?s amazing how much Jerry Kill extracts from two- and three-star recruits. And when you consider Kill recruits with arguably the worst facilities in the Big Ten, it makes what he?s doing all the more remarkable. I just hope this season pushes the envelope for investment into the football infrastructure at Minnesota. If not now, when?

10. Purdue cemented its status as the worst team in the Big Ten for a second season in a row. The Boilermakers ended the season with six losses in a row and failed to score more than 16 points in any of its last four games. In two years, Darrell Hazell is 4-20 overall and 1-15 in the Big Ten-and two wins have been vs. FCS foes. The offense has few playmakers and loses its best one in running back Akeem Hunt. The quarterback play is a giant question mark. And aside from Danny Anthrop, the receiving corps is woefully inadequate. The defense? It remains a big work in progress across the board. Yes, some progress was made in 2014. But much more is needed next season for a program stuck in its worst rut in school history.