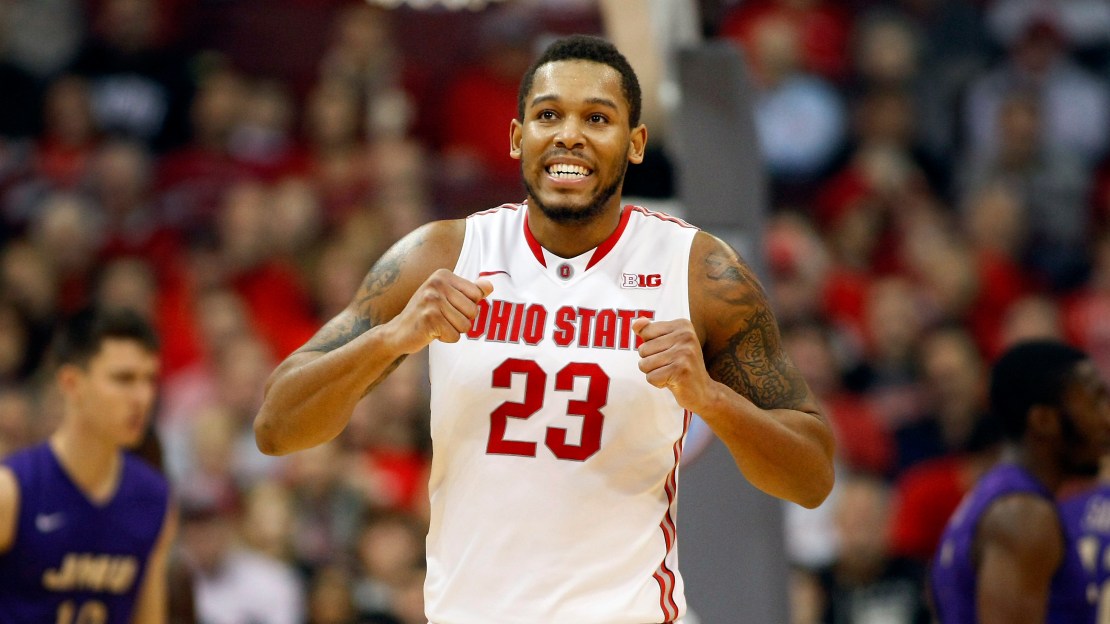 It was another busy night in Big Ten men's basketball action, beginning with Ohio State's 73-56 win over James Madison.

Denzel Valentine had a career-high 25 points and No. 20 Michigan State beat Marquette 79-68 Friday night in a semifinal at the Orlando Classic. Travis Trice added 19 points for Michigan State (5-1).

Rayvonte Rice and Malcolm Hill each scored 17 points to lead Illinois to a 62-54 win over Baylor in the championship game of the Las Vegas Invitational on Friday night. Rice, who had seven rebounds and three steals, was named the tournament's Most Valuable Player. The Illini are 6-0 and have won 32 straight November games.

INDIANA 87, UNC-GREENSBORO 79: BOX | PBP | AP RECAP
After letting a large second-half lead slip away for the third straight game, Indiana held on for an 87-79 win against UNC Greensboro on Friday night. Indiana (5-1) led by as many as 22 points in the second half, before UNC Greensboro (1-5) cut the lead to just six in the final moments of the game. The Spartans outscored Indiana 45-37 in the second half.

Walter Pitchford scored 19 points, Terran Petteway added 18 with eight assists, and Nebraska held off Tennessee-Martin 75-64. Nebraska (4-1) used a 17-4 run in the last seven minutes of the first half to take a 13-point halftime lead. The Huskers stretched that advantage to 19 on Benny Parkers' free throws with 14:26 left.

Freshman Melo Trimble scored 13 of his 24 points in the second half and Maryland extended its winning streak to six games by holding off Monmouth 61-56. The Terrapins were playing their first game without leading scorer Dez Wells, will be sidelined for at least four weeks because of a broken bone in his right wrist. Maryland (6-0) did get a boost with the return of Evan Smotrycz, who missed the early part of the season with a broken left foot.

Myles Mack scored 10 of his 21 points in the second half to lead Rutgers to a 68-65 win over Vanderbilt in the first semifinal of the Barclays Center Classic. Kadeem Jack had 20 points and eight rebounds in his third game back from a sprained right thumb for the Scarlet Knights (3-2). Mike Williams and Junior Etou had 11 and 10.

D'Angelo Russell scored 14 points, Sam Thompson had 13 points and No. 16 Ohio State got big contributions from its big men in beating James Madison 73-56 on Friday. Starting center Amir Williams had seven points and nine rebounds, and backups Trey McDonald and Anthony Lee had eight points each.

Tournament MVP Frank Kaminsky scored 17 points to lead five Wisconsin players in double figures, Duje Dukan and Traevon Jackson each added 13 and the second-ranked Badgers beat Oklahoma 69-56 on Friday to win the Battle 4 Atlantis championship. Sam Dekker scored 11 and Nigel Hayes finished with 10 for Wisconsin (7-0), which trailed by one late in the first half before peeling off 10 straight points and taking the lead for good.

D.J. Newbill had 28 points and Penn State pulled away late for an 88-80 victory over Bucknell on Friday. The Nittany Lions (6-1) never trailed but never led by more than 12. Bucknell (2-5) tied the game once, at 66-all, with 6:19 to play. Penn State answered with a 12-4 run and held steady from there with Newbill scoring six of the Nittany Lions' last 10 points to secure the win.